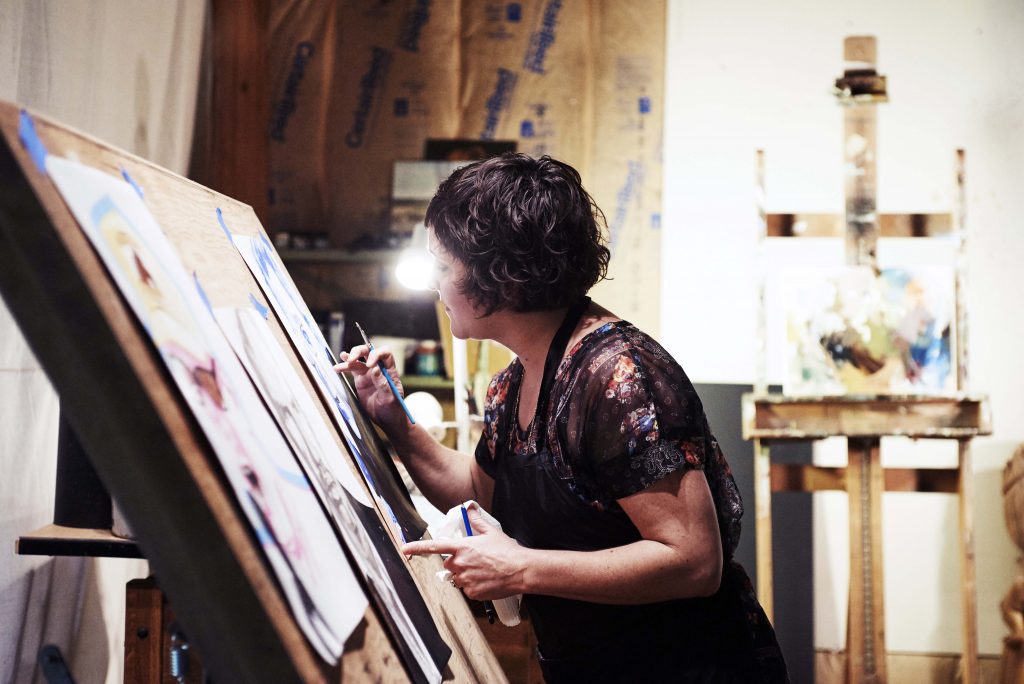 Julia Martin’s mastery of color, typically applied to sumptuous close-ups of imagined female faces, has garnered national acclaim and a loyal Nashville fan base. Simply put, her work is beautiful. But Martin—quick with a booming laugh, bare-bones opinions, and personal stories—is no longer just creating beauty. Her new show, Hypnogogic (referring to the state immediately before falling asleep), opens at the artist’s four-year-old namesake gallery on December 1. The work included is still beautiful, but it’s darker—the kind of beauty that comes from what the work can do.

Martin’s home studio in East Nashville reveals the artist in the process of finishing two different series. At her “creation station” are several portraits of Nashville music legends, to be hung in the soon-to-open hotel Noelle. Eleven artists were asked to create work for each floor of the hotel. “It’s all about unearthing the architects and . . . unsung heroes of Nashville, heroes in the social justice realm,” says Martin. She plans on transforming her floor into a tribute to Nashville’s rock scene: there will be pieces featuring Lucy’s Record Shop, Dave Cloud (in blue, his face looming as if he’s mid-story), and Jessi Zazu (in her beret, wreathed in hot pink paint).

Past the Noelle portraits are the works-in-progress of Hypnogogic, illuminated in the studio’s far corner. The silence of Martin’s insulated studio is deafening—the kind of vacuum that could keep a person from falling asleep. Martin and I are joined by her brown dog named Bill, who barks when asked about Vladimir Putin (it’s his only trick). 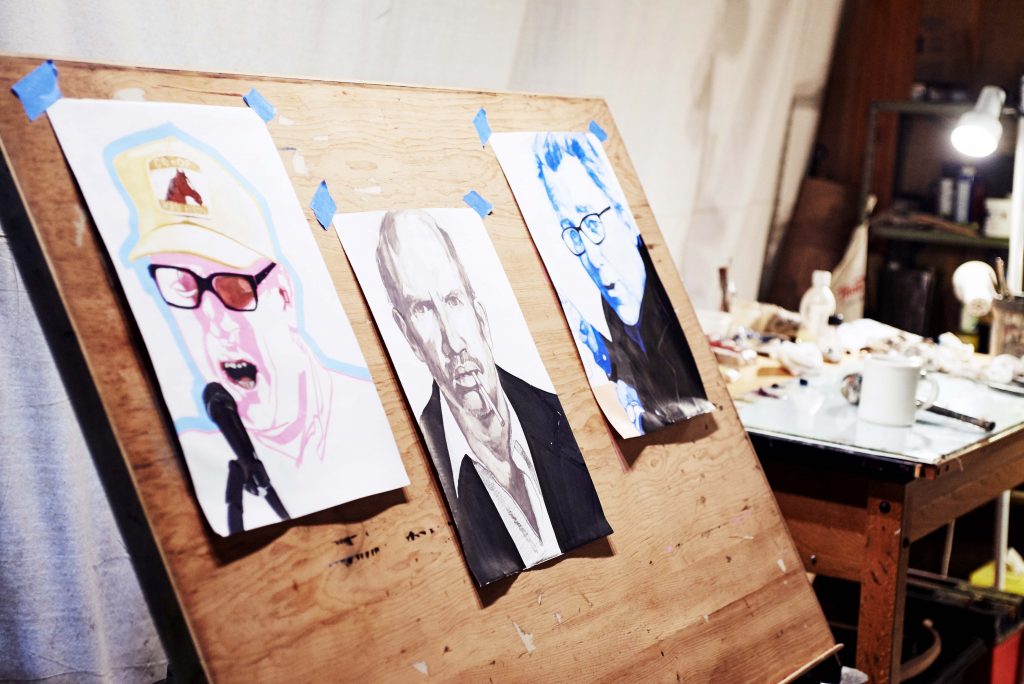 In discussing Hypnogogic, Martin talks about feeling like she’s been sleepwalking for years, that she’s just started to wake up and is leaving politeness, preciousness, even selfishness behind. She says she was “sick” of herself and calls herself names: chickenshit, insecure. Several days before our interview, Martin texted me some rough notes—very rough, like a stream of consciousness, with fragmented thoughts and asides.

“Old habits are finally dying,” she wrote. “Ever the late bloomer, as I rapidly approach my fortieth year I am finally beginning to [discover] who I am and what I want to say—as a human being, more importantly as a woman, and finally as an artist. I’ve found doing things that scare the shit out of me to be very helpful in this endeavor. The gallery has thrust me into scenarios that fit this description a number of times over the last four years, and every time I come out the other end a little wiser, a little braver, and with a little more clarity as to what my role on this planet really means. By some miracle I have this platform, this opportunity to lift up other artists, help tell stories that can open hearts and minds and occasionally hold up a mirror to society. That’s a big fucking deal to me, and I feel a great deal of responsibility to use that platform for the greater good of everyone that walks through that doorway.” 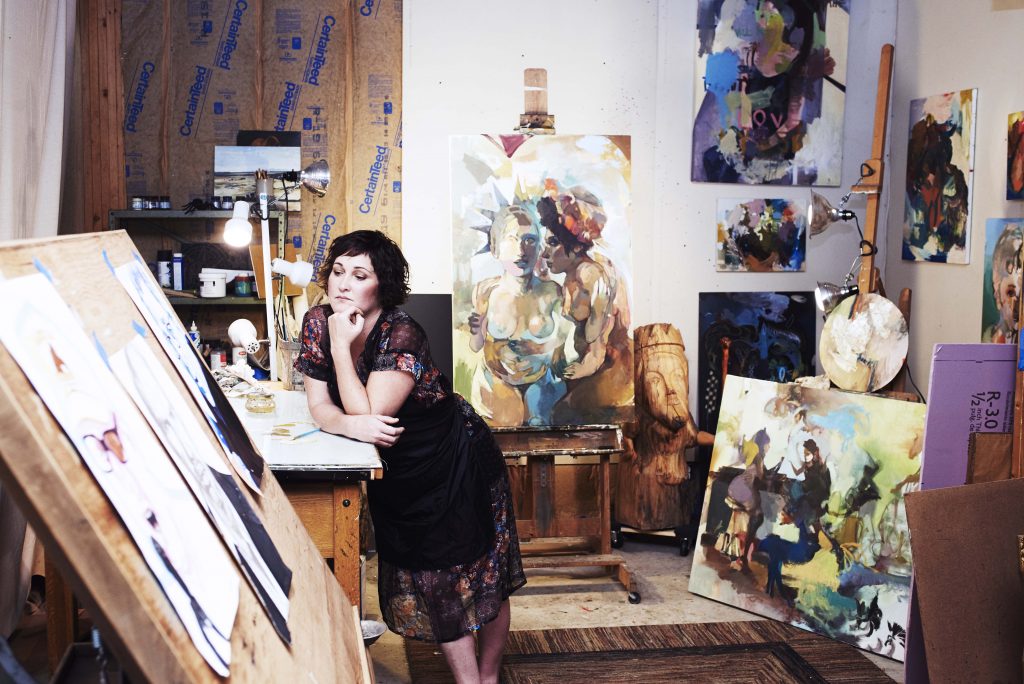 Martin can trace this shift to three gallery events in particular. The first was in 2015, when in response to criticism and public outcry, Acme Feed & Seed removed a painting by Sheila B. of a woman in a Confederate flag bikini. As Martin’s gallery had just featured a show for Sheila B., Martin stepped forward to organize and host an “open-forum discussion” about the removal.

The second was in 2016, when a bullet pierced clear through the Julia Martin Gallery on the Fourth of July, prompting the External Ballistics group exhibition and subsequent discussion about gun violence. “This is also where [artists] Sam Dunson and Noah Saterstrom met for the first time,” Martin says, “and in the gallery’s kitchen had the most incredible, open, direct, and respectful conversation about slavery I have ever witnessed.”

The third event was Shubuta and Other Stories, Saterstrom’s first solo exhibition in Nashville, hosted at Martin’s gallery at the beginning of 2017. Saterstrom is a white man from Mississippi whose lineage traces back to prominent slave owners; Dunson’s traces back to slaves in Southern Georgia. Martin invited Dunson to make a piece that reacted to Saterstrom’s In Times of War, and the result is his crushing Antebellum. Says Martin, “Showing that work was the scariest thing I have done in my adult life. And I’ve jumped out of airplanes . . . That show opened a lot of hearts and minds. It educated everyone that took the time to show up and will likely remain my proudest moment as a curator.” 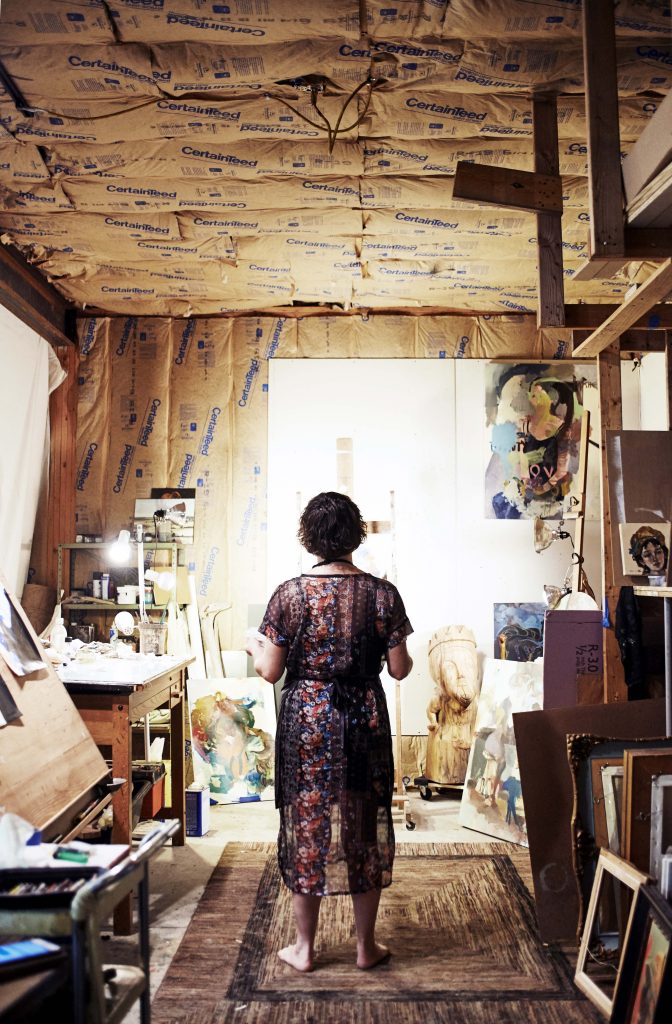 Martin also has a lot of pride for the most powerful painting in Hypnogogic, which she calls her “swan song.” In it, two women sit side by side: a naked Lady Liberty, her eyes vacant, her breasts and body open to the viewer; and a black woman, her hair wrapped in a scarf, face turned toward the ear of Liberty, her one eye zeroing in on the viewer. “I really want [the black woman] to be locking eyes with everyone that comes in front of this painting . . . She’s the one that we all need to listen to right now,” Martin says. The women’s bodies are loose and fluid, but there is power in the clarity of the black woman’s face, and in the way she grasps Liberty’s arm. “I love that moment,” Martin says of the grip on Liberty’s wrist. “‘Sister, you need to listen to what I’m telling you right now, and listen before you act. Think before you speak.’” Martin is considering titling the piece “Girl Talk,” which lends real power to that which is so often brushed off as hennish or unimportant: women talking.

But for all the power behind this piece, there is softness that nearly breaks your heart: black arms wrap around the vulnerable belly of Liberty, caressing the part of the female form that is so often a point of shame. Martin grabs at her own belly, saying, “I’ve always had a belly—since I was born I’ve had it. I’ve always thought of it as a curse, which is so terrible because this entire part of every human being is where all your joy lives!” Martin sweeps her arm from clavicle to pelvis. “It’s the most important part of you, you better love it! [Stop] wasting time resenting it or trying to hide it, wrapping up in fucking Spanx! Just let it be and love it.”

Many works of Hypnogogic share this loveliness and fearlessness, this sense of femininity delivered with force. Martin refers to her portraiture as a “crutch” and calls her “peekaboo background” her MO, but in an as-yet-unnamed painting, the portrait has literally been destroyed: the original piece was an image of Martin painted by a family friend, and Martin has appropriated her own likeness, covering her face in recklessly painted words until only one eye peeks out at the viewer. Martin completed this reverse self-portrait shortly after Zazu’s death, a fittingly gutsy homage to the young musician who battled cancer while wearing a T-shirt that read “Ain’t Afraid.”

In other paintings, that “peekaboo background” has exploded in looseness, becoming far more abstract than ever before. Sometimes it seems like Martin’s swirls of color are in motion or are multiple moments convalescing at once. A dark ode to artist Merrilee Challiss hides a skull-like face within a series of meticulous (and not-so-meticulous) swirls. And in the exhibition’s namesake piece, a large-scale homage to female friendship (an image of Martin and her longtime best friend, perched at the corner of a bar), the abstract colors seem to fill the middle ground with elements that could be real or imaginary. 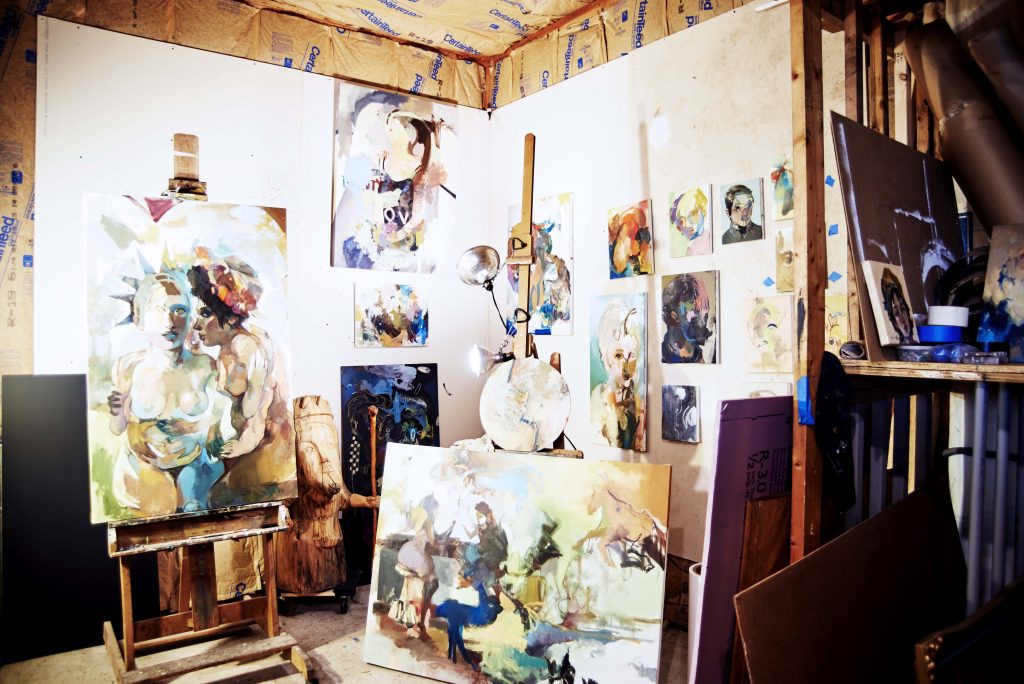 “It’s a seizure on canvas!” Martin cries. “I really feel like it is a tribute to my oldest and dearest girlfriend.” Above their heads burst outlined horses in ochre and turquoise, and just under their feet is what appears to be a two-legged rabbit, which Martin explains is an ode to “My Pal Foot Foot,” a truly insane song by The Shaggs (it’s a whole other kind of seizure). Martin can’t stop laughing as she describes all this, especially when she starts singing “My Pal Foot Foot”: “My pal’s name is Foot Foot / He always likes to roam / My pal’s name is Foot Foot / I never find him home / I go to his house, knock at his door / People come out and say, ‘Foot Foot don’t live here no more.’”

As personal as this work is, there’s a lot that goes unanswered: “It’s a playful kind of invitation to let your imagination [go],” Martin says. “I get so, so depressed when people want and need so desperately to define what a piece is about. It’s not the reason anyone makes a piece of artwork. It’s meant to be an experience . . . and an opportunity for someone else’s imagination to go on a little trip.”

As a finishing touch to Hypnogogic, Martin has organized a special presentation for her show’s opening: the first thirty minutes will feature a musical performance by Larissa Maestro inspired by the work, including riffs that honor Zazu and Foot Foot.

But Martin’s collection isn’t yet done. There’s still fear in this room and still plenty of courage to call forth. Her most pressing concern is her wooden sculptures, which she cannot bring herself to paint. A short, crowned, wizard-like woman sculpture (unpainted) stands next to Martin’s appropriated self-portrait. “I’ve had a loaded brush hovering over her three separate times and just couldn’t do it,” Martin says. “Timing is everything. And I think my head hasn’t been in the right place to tackle it.”

Change is hard—most of us avoid it altogether. Come December, I have no doubt that the little woman will be painted.

“If you’re going to be creative in any capacity, you have to stay curious,” Martin says. “You’ve got to keep pushing, and you’ve got to keep striving for a new way to communicate . . . Anytime you’re struggling, and you feel like you’re so alone in this battle that no one can possibly understand, all that shit is so human, we all go through it. Being brave enough to speak to that in a public setting and especially in a creative way—in a song or a painting—and presenting it, it’s so easy to get lost in the fear . . . That’s what this body of work is about: exploration and getting lost in it and seeing what happens, and really trying to grow—hopefully.”

Hypnogogic will run December 1 through January 1 at The Julia Martin Gallery.