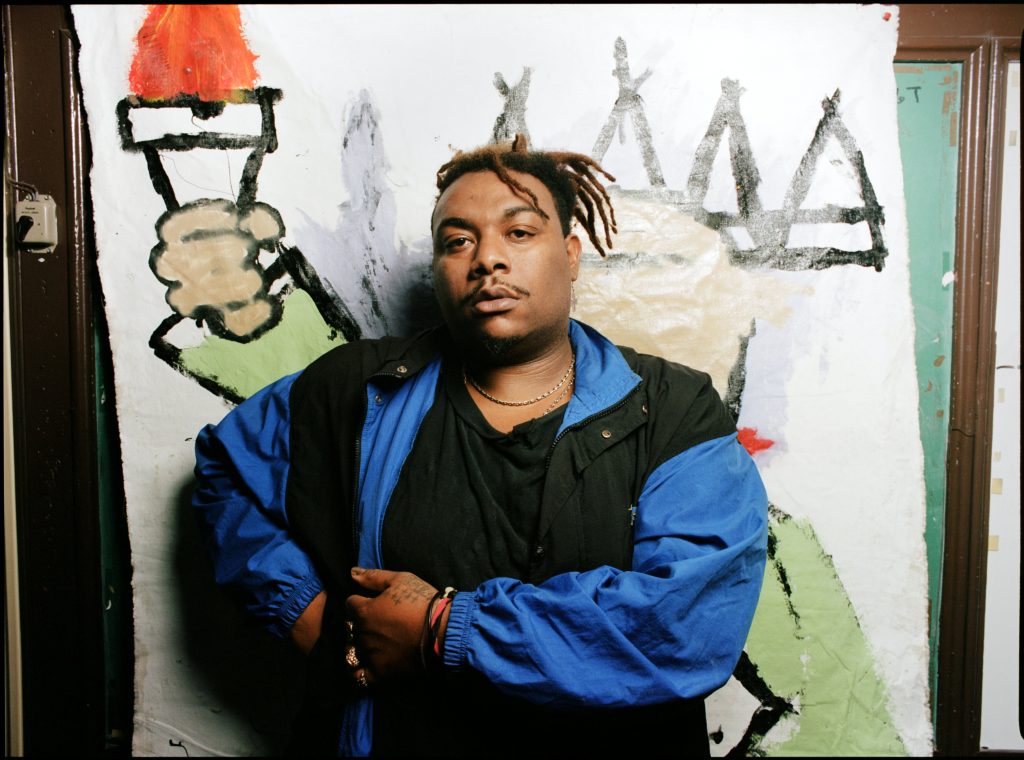 Marlos E’van is a local painter, sculptor, and director originally from Biloxi, Mississippi. In 2012, he relocated to Nashville to attend Watkins, and in the time since he graduated, he’s shown everywhere from the Watkins Arcade Gallery to Zeitgeist Gallery to an abandoned North Nashville warehouse. E’van’s work boldly addresses socioeconomic and racial issues in America, and last year, the Nashville Scene awarded his Dyin’ By Tha Gun! exhibit “Best First Solo Show.” In anticipation of Y.N.P., his upcoming November 4 show at Track One, we talked to E’van about race in the South, the bittersweet joy of fast food, and why you should be happy if someone walks out of your show. 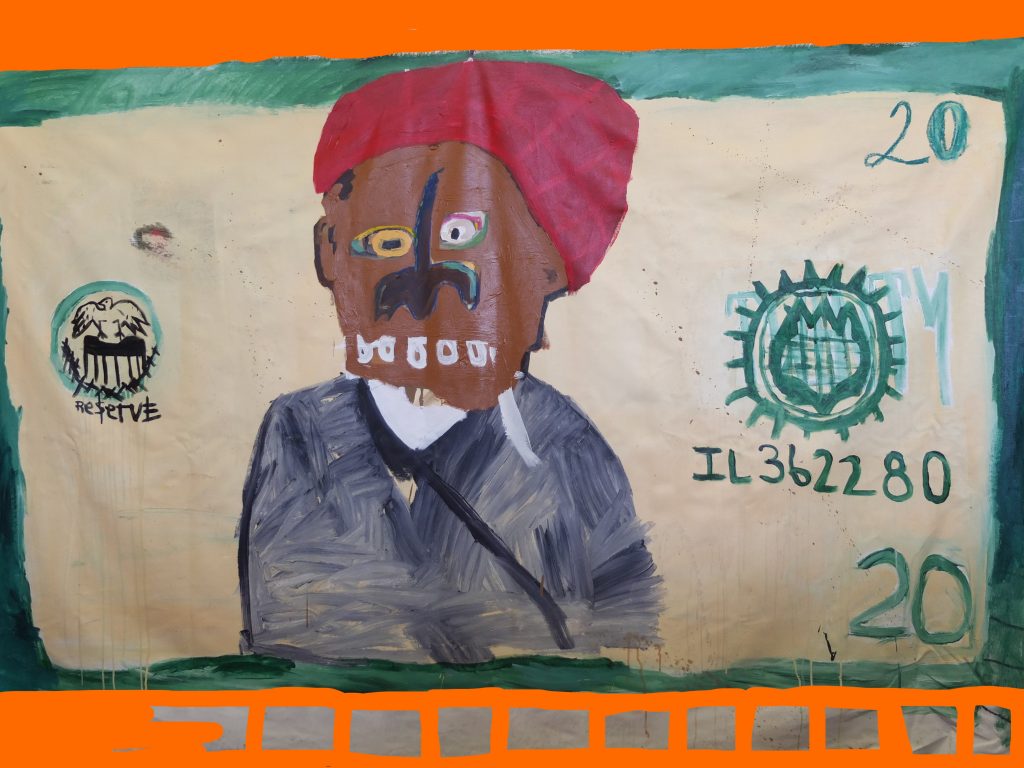 You made a Confederate flag for part of your Dyin’ By Tha Gun! exhibit last year. Back then, did you imagine something like the Charlottesville attack would happen? And do you think the work takes on new meaning now, as the country debates the significance of Confederate monuments?

When I first made the work, I don’t think I could have predicted it happening. But since Trump crashed the party, nothing surprises me anymore. The door is open again for all kind of weird stuff to go down. The piece you’re talking about is actually the Mississippi state flag, which still has the Confederate flag in the top left corner [laughs]—the one we used to pledge allegiance to back home in elementary school. So yeah, I feel it totally takes on current meanings and kind of makes you wonder how things like that slipped under the radar for so long. We have to understand that overt racism never died. It just adapted to the times in order to survive.

You did a show with Brandon Donahue back in August called Somebody Say Cool-aid? Walk us through the collaborative process behind that.

Man, Somebody Say Cool-aid? was a crazy experience! It’s a series of work based on a conversation me and Brandon were having one day about American consumer culture when the thought hit us: other than Coca-Cola, Kool-Aid is one of the most iconic American brands that has ever existed. It’s cheap, accessible, and was mainly marketed to brown and black people from its beginning. We kept that conversation going over the next few months and really unpacked everything we could about Kool-Aid. The first show included performance art, live painting, and about four to five different flavors of Kool-Aid on hand for everybody to enjoy. The blue Kool-Aid was a hit, and I drank way too much of it that day.

Speaking of Kool-Aid, food—particularly fast food and cheap food—comes up quite a bit in your work. What are you hoping to communicate by including food like Kool-Aid, fries, and burgers in your work?

Fast food and sodas are still very much a reality in my life, ya know? So I wanted to talk about equal access to food and food equality/food deserts—all things that affect my community. I haven’t eaten it in a while, but let’s be real: on a good Friday night, sometimes the best thing to do at the end of the night is to grab ratchet fast food with your friends. There’s nothing like it, and it’s cheap! But it screws us up. And when you don’t have cash, it becomes one of the few options you have. Make America Farm Again. 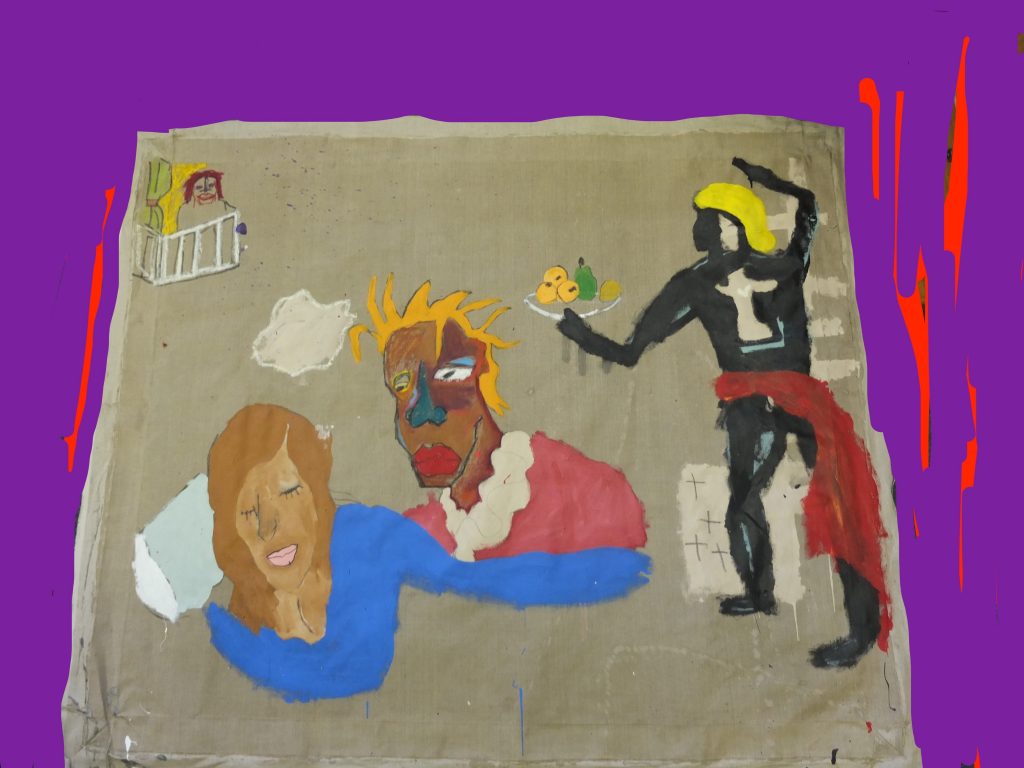 In reference to your short film, “Northern Gardens,” which premiered at McGruder Family Resource Center, you said, “If nobody walks out on your film, you didn’t do it right!” Do you apply that same mindset to your paintings, and if so, how?

Oh, I have to. By choosing the way I want to create and present to the people, taking chances, and most of all, making things that I enjoy, it keeps me free. I’m sure John Waters enjoyed watching Pink Flamingos, and people walked out on his films all the time. In some weird way that makes it worthwhile to me. It means that ultimately, people are thinking and feeling.

Everyone from William Faulkner to historian Joseph Crespino has argued that Mississippi’s racial woes can be seen as a metaphor for—or a microcosm of—America’s racial woes as a whole. As an artist originally from Mississippi who addresses racial issues in his work, how do you feel about that idea?

Great question. For the most part, Mississippi has always been unapologetic when it comes to racism and inequality, while other places seemed to be more low-key with it for a while. Some of the most important assassinations during the civil rights era happened down there. Emmett Till’s murderers walked away free in 1955, just like Trayvon Martin’s murderer did in 2012.

At the time, some white Southerners rejected civil rights in order to preserve Jim Crow and keep division. Destroying DACA is a similar act. America’s not hiding it anymore, and if you’re not a part of the patriarchy, then the hunt is on. Colin Kaepernick got blackballed from the NFL for a silent protest. 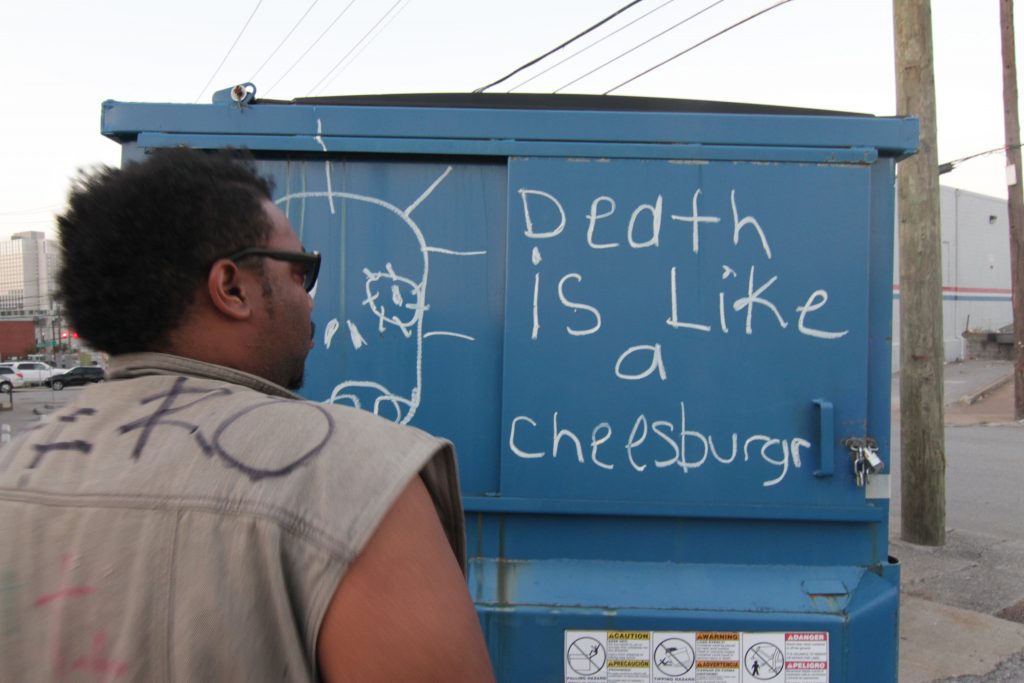 In the past few years, Nashville’s seen a rise in public art and art spaces. Do you think we’re on our way to being more of an art destination, or is there more work to be done?

I feel that we’re one of the most interesting art destinations in the nation and could possibly be one of the top ten art destinations in the world within the next few years—especially when we get our just due. There’s so many great, diverse artists here that make great work across all kinds of mediums, and it’s beautiful how some of these communities support each other.

On the flip side, there’s still work to be done. Some of it comes down to people’s willingness and understanding of purchasing art. Everybody loves a good show, so next time you’re at one, take a chance and buy some art. This helps artists sustain themselves in order to keep making great work. It’s okay to be an art collector.

What are you working on now, and what do you hope to see continue in Nashville’s arts communities?

So, right now I’m working on my next solo show called Y.N.P. It’s gonna be during the art crawl on November 4 in the Silo Room at Track One in the Wedgewood-Houston area. It’s the show of the decade, and everybody who’s anybody should be there!

I want our community to keep pushing each other, supporting each other, holding each other accountable. Collaborating with organizations like the Metro Arts Commission and Learning Lab also helps bring artists’ visions to life. They helped me and Courtney Adair Johnson start and fund one of the only artist residencies in Nashville right now. We run it out of the McGruder Center in North Nashville. 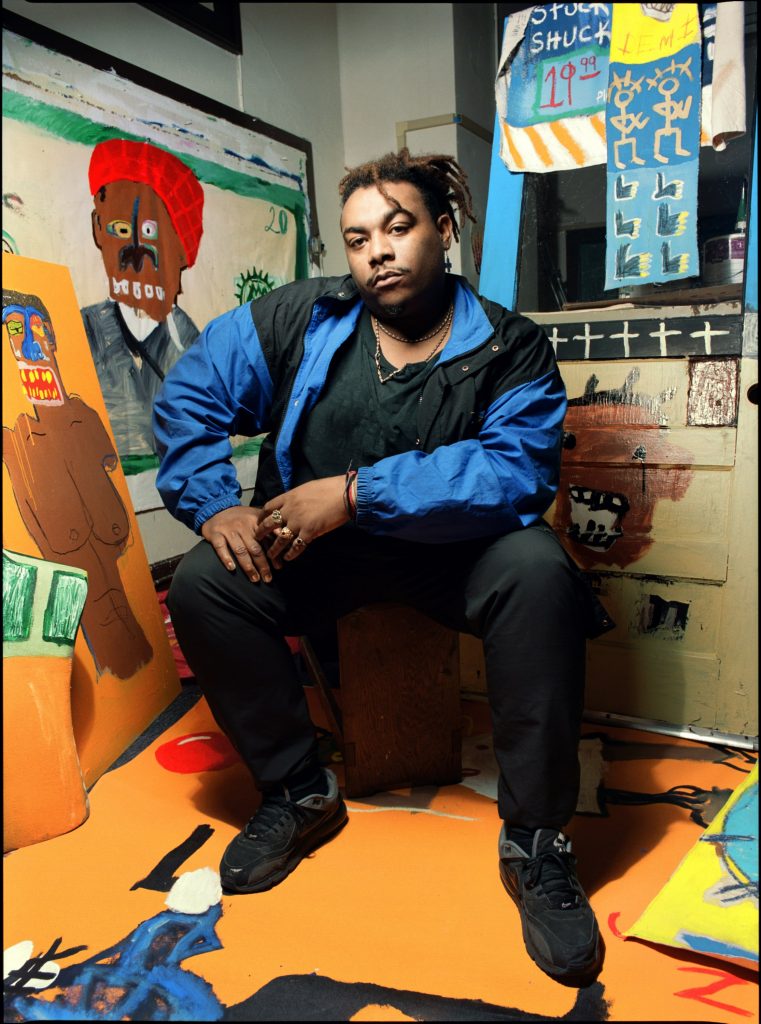 Your work doesn’t strike us as particularly subtle. Do you think it’s necessary to make big, bold statements in this day and age to cut through the constant stream of media we consume every day?

Oh yeah, for sure! We swim in images every day—that’s why I keep it real and raw. With so many images out there, I’m trying my best to cut out the confusion of what you’re looking at. I’m not tryna trick you, I’m tryna have a conversation with you.

On the subject of media, particularly new media—some of your work features digitally manipulated images. A couple of examples that come to mind: there’s a cutout picture of Chuck Norris with an American flag behind him in Dyin’ By Tha Gun! Part 2 and a picture of some Jordans with dollar signs drawn on them called Things We Die 4. What draws you to the images you use in your work?

Jordans are like an unstable family member: they’re always there and sometimes they can get you killed, but we can’t get enough of them. I manipulate iconic images digitally and present them in ways that ask us to consider them in a different context, sort of like memes do . . . It’s kind of like a microscope and middle finger to commercialism, while still appreciating the aesthetic quality of these items.

You’ve done everything from painting to sculpting to directing to performance art. How do these various mediums interact with each other in your world, and do you approach each differently?

All of these components come together to say something and really make an environment. I’m all about creating environments for my audience when they step into my shows. Music is also a big part of what I do. I think exploring different mediums provides different sides to Marlos E’van. I want to tell a story. I want to make you cry, make you think, and make you laugh at times—really tap into your emotions to say, “Hey, we’re all here together. Let’s work it out.”

Y.N.P. is showing November 4 at Track One.