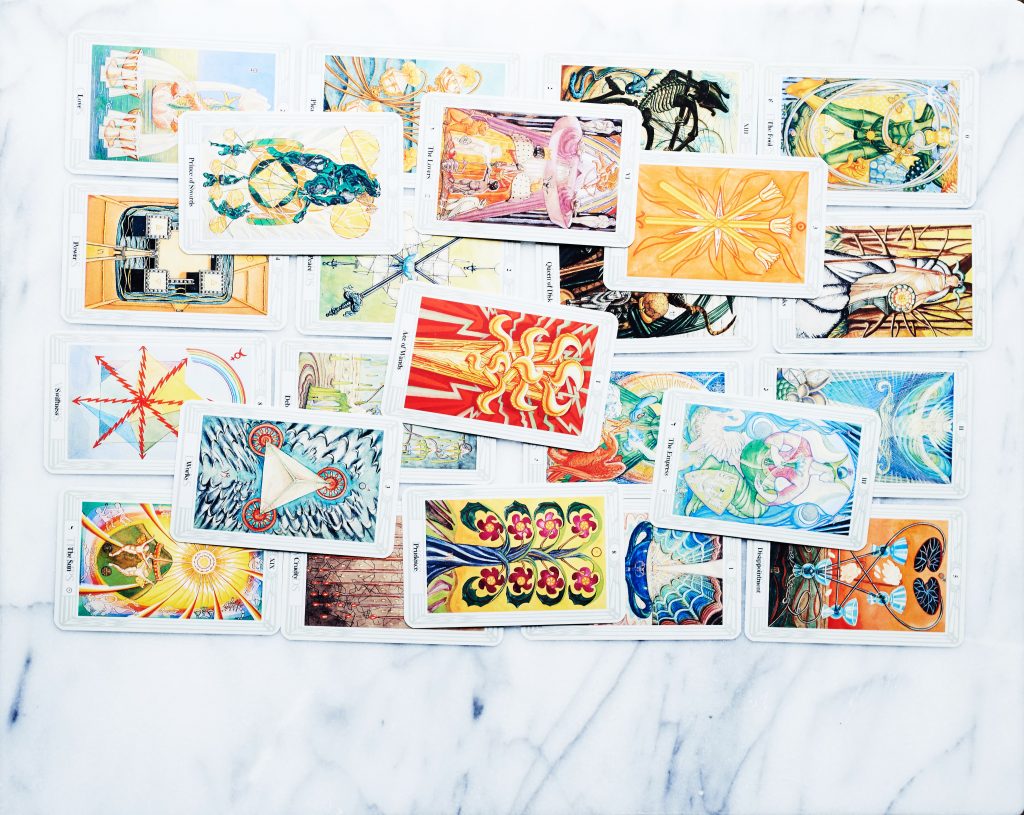 WITH A CRYPTIC NAME LIKE “DRACONIS ARCANUM,” one might expect to find a dark, cave-like shop full of satanist tools and black magic. But what I (and hopefully many others seriously interested in the spiritual wisdom that can be taken from the different paths of pagan-based religions and folk magick) want to share with others is that there’s nothing satanically scary about an occult shop or taking an interest in these spiritual paths. Rebecca Petersen’s shop, Draconis Arcanum, is the perfect example of how open and inviting an occult shop can be.

Draconis arcanum is Latin for “the hidden dragon.” “My original logo was an ouroboros,” Rebecca explains, “which is the snake or the dragon eating its own tail. And that’s about discovering the inner truth and it also represents the cycle of nature. Dragons are known for being protective and guarding treasures. The European ones are hidden in caves, and you know with the occult, it’s a lot of delving into the hidden and bringing it to light. So I thought that name really fit because it’s about that journey of finding out about your inner self and bringing that to light.”

One particular online blurb about Draconis Arcanum mildly associates the shop with satanism. Satanism, however, is not equivalent to paganism and magick as many tend to believe. “I was very entertained by that,” Rebecca says. “Maybe because I know that we’re in the Bible Belt, so you’ve got this whole ‘Witchcraft is evil, it’s from Satan’ [mentality] . . . Considering that anywhere between a third to half of my customers are devout Christians that go to church every Sunday, I’m like, ‘Yeah, right,’” she laughs. “I know that there’s been that battle within a lot of pagan movements about trying to shed that satanic connotation . . . so that can be a little bit frustrating. But also, I saw it as appealing to some of the ones that are on the darker side. And I’m okay with that too.”

Folk magick and metaphysics were always a part of Rebecca’s family growing up. “It was never called ‘spellwork’ or ‘witchcraft’ or anything,” she explains. “It was just what we did and I saw the effects of it and was curious how it worked and whether or not my family was the only one doing it. Although I was very active in the church, read the Bible cover to cover, I started having more questions. So I started exploring and meeting tons of people and learning about all different paths.” 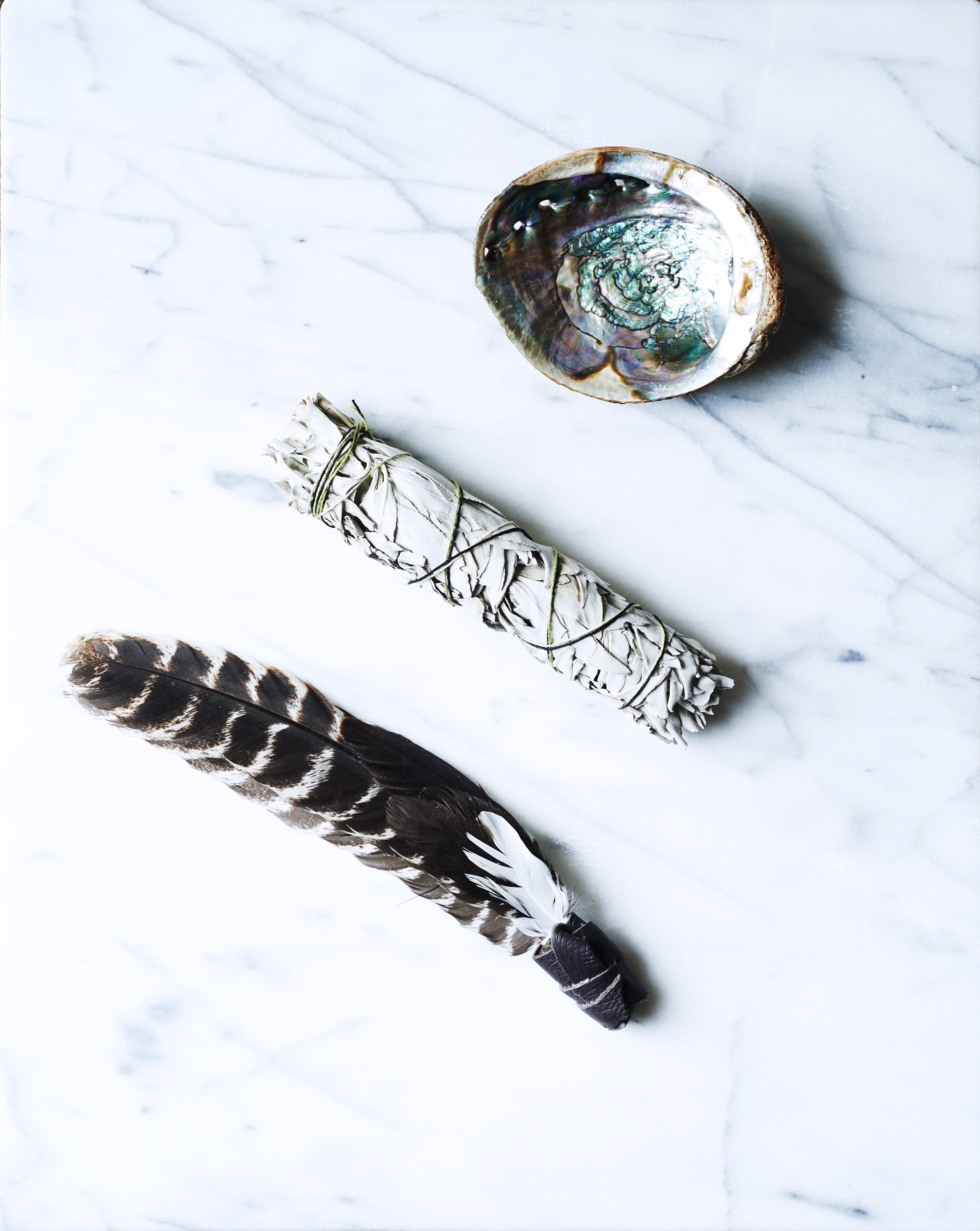 The two main areas Rebecca focuses on are hoodoo/conjure and ceremonial magick. “They mesh so well because there are so many people that practice a lot of that folk magick . . . even though those paths seem entirely opposite. The folk magick is candles, herbs, oils, and incense, and the ceremonial magick is a lot more dramatic rituals that don’t utilize candle magick. You’re not going to find very many Wicca books here because there are a couple of other places here in town that offer that and specialize in that and do very well. But I feel comfortable with the conjure and the ceremonial magick. I feel comfortable talking to people about it, helping to guide them, and figuring out where they need to go on their path next or helping them with a situation.”

Rebecca’s business can be traced back to the mid90s when she began working at metaphysical festivals. “I was living up in Milwaukee at the time, and the big metaphysical shop had closed,” she explains. “People kept coming to me, asking, ‘Do you have any extra lavender? Do you have any extra patchouli?’ So I started buying a little bit more just to help out and started developing from there.” In 2003, Rebecca moved to Chicago and started teaching classes through metaphysical bookstores and developing her online store. “We had already been talking about opening up a shop in Chicago when my husband ended up getting a job offer down here about three years ago, so we decided to figure out what the [metaphysical] needs for Nashville were and opened the store about two years ago.”

What you’ll actually find in Draconis Arcanum are rare and limited edition books; incense; tarot cards and other divination sets; sage for smudging; books full of information about dream interpretation, hoodoo, voodoo, Santeria, and other forms of spellwork; resins for incense; an extensive variety of herbs, bath blends, essential oils, and zodiac oils (which are made with the herbs associated with the planet and element that coordinate with the sign, using a combination of old hoodoo formulas and alchemical working); and candles galore, some that are already loaded with oils and herbs for specific situations. 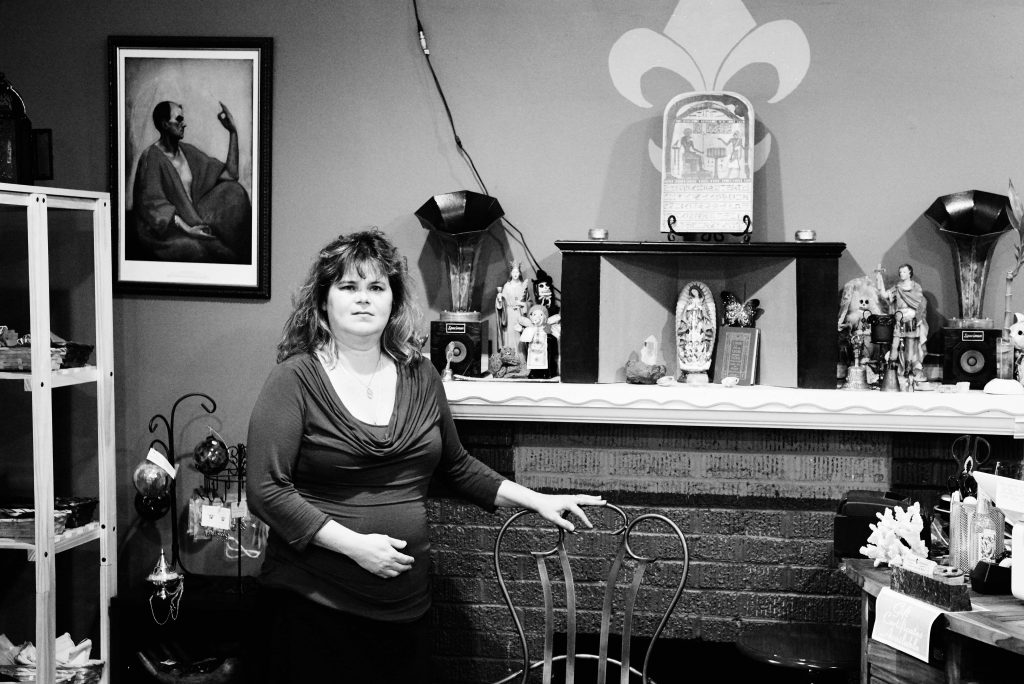 I notice she has a couple copies of Buckland’s Complete Book of Witchcraft by Raymond Buckland, which was the book that raised my own personal interest in Wicca. She tells me it is one of the few books on Wicca that she does like to keep in the store. “It’s a great introduction,” she states. “It’s the one I always suggest if people are interested but not sure what path to go down. It allows you to experiment, and you learn that nothing bad is going to happen; you’re not going to raise a demon. The most you’re going to do is clear out the bad stuff.”

Rebecca curates her store very carefully. She tries to only stock items that she is truly knowledgeable about. “The shops that I loved were the ones where the people working there were able to help if there was a question. Most of the customers have questions, and they may be stuck or overwhelmed with everything and they’re looking for new information. So most of my days here have been doing mini consultations. One of the things I have been finding that I really enjoy about running the shop is that I get to interact with people on all parts of their spiritual journeys. Whether they’re beginning or advanced, there’s always something they can gain.”

Rebecca also offers classes and workshops in her space. “We do classes almost every single weekend, ranging from hoodoo and conjure to something as simple as how to dress a seven-day candle. We offer full-moon rituals that are open to everyone and familyfriendly. The lady who runs it incorporates any children who are present in helping out, and with those, it’s more focused on the folklore associated with the energy of that month’s moon. For example, the most recent one was the snow moon, and it was about cleaning out, doing that spring cleaning, thinking about what we want to clean out of our lives, that clutter that prevents us from laying a good foundation. It’s like with gardens, you’ve got to clean out all of the debris that has ended there over the winter to be able to plant.” 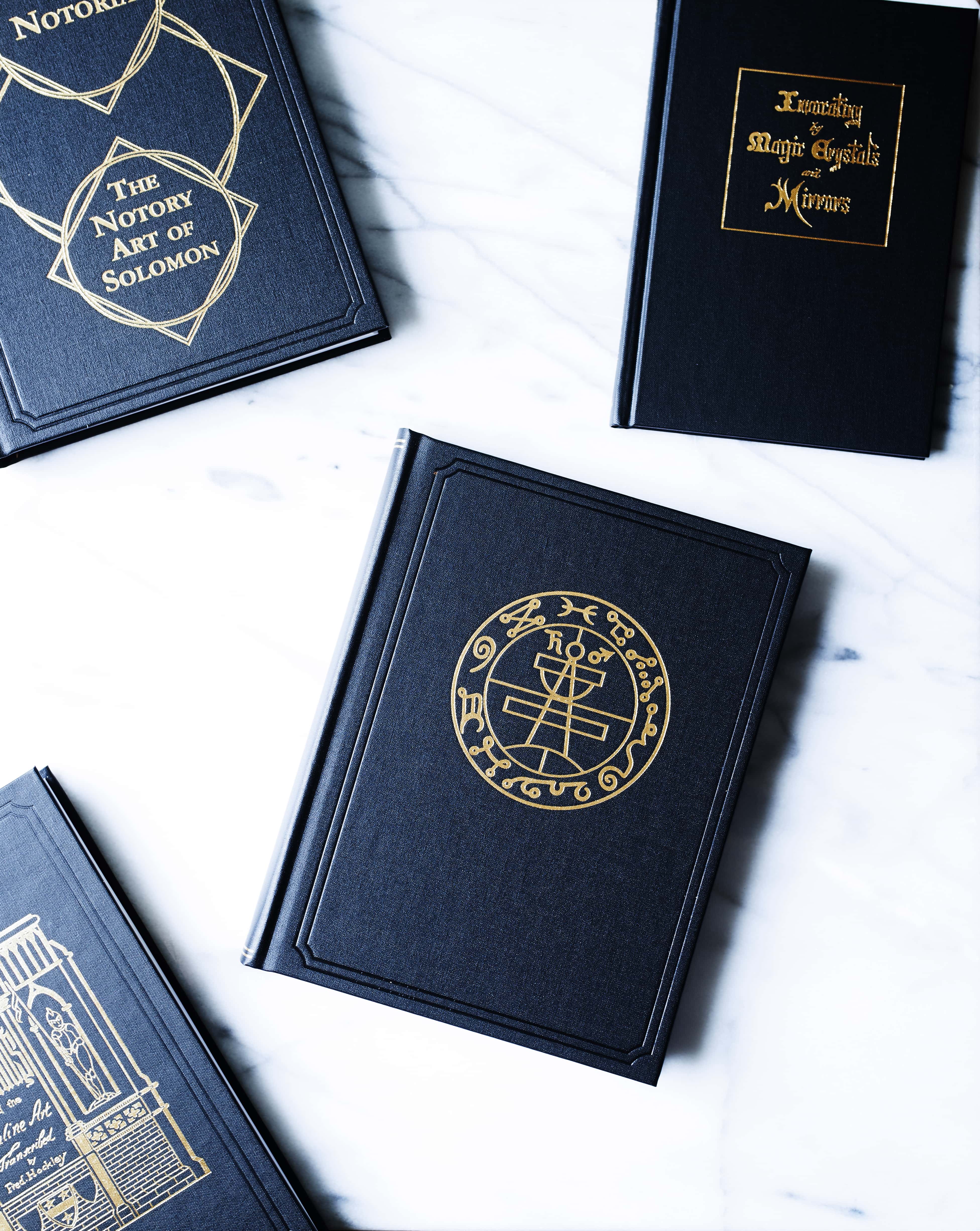 Rebecca offers to give me a personal mini class on how to dress a seven-day candle. She asks if there is a particular situation in my life that I want a little magical help with, because she can tailor the candle dressing to my specific situation. I tell her I want to focus on letting go of past relationships so I can open myself up to new friendships and letting new people in. In short, letting go in order to be open to change. She immediately knows which herbs and oils she’s going to use. She goes and grabs a candle. “What I picked was a white candle,” she explains to me. “White represents all colors, and so it is a good basis. You mentioned wanting to let go, and typically letting go would be a black one to release, but at the same time, you’re wanting to bring in connections. Attraction is usually a pink one, but since this is a bit of a dual purpose—clearing out to bring in—I wanted to do something that captures both, and that white one captures both.”

“With any candle you get, you want to clean it,” She continues. “It cleans off dust and dirt, but it also cleans off whatever energy that could have been on there from before, because you never know who was touching it or what their energy was. You want to make sure it’s as clean as possible. You can use Florida water, or salt water, or blessed water. And blessed water can be something as simple as water you have concentrated good intents into. Florida water is used more in conjure and voodoo and Santeria. The blessed water is more on the ceremonial side. The next step would be adding an oil that’s either a ‘simple,’ which would be things like lavender or patchouli essential oil, or a blended oil, which would be called a ‘conditioned’ oil. With this one, I picked ‘Cut and Clear’ because you’re cutting through the old stuff to make way.” It appropriately has a clean scent, slightly citrus.

Because she is using a candle in a glass cylinder and she can’t directly rub the oil down the sides of the candle, she takes a screwdriver and pushes it deep into the wax to make three holes and then drips the oil into each hole with a dropper. The next step is to add the herbs into the candle. “I picked jasmine because it draws in love and prosperity, which addresses general friendships, and it’s good also for dream magick, which helps keep your dreams nice and positive. It also heightens your intuition, so it will help direct you in those ways that you’re going to meet those people that you want to meet.” She uses the buds of jasmine to plug up the holes of the candle. 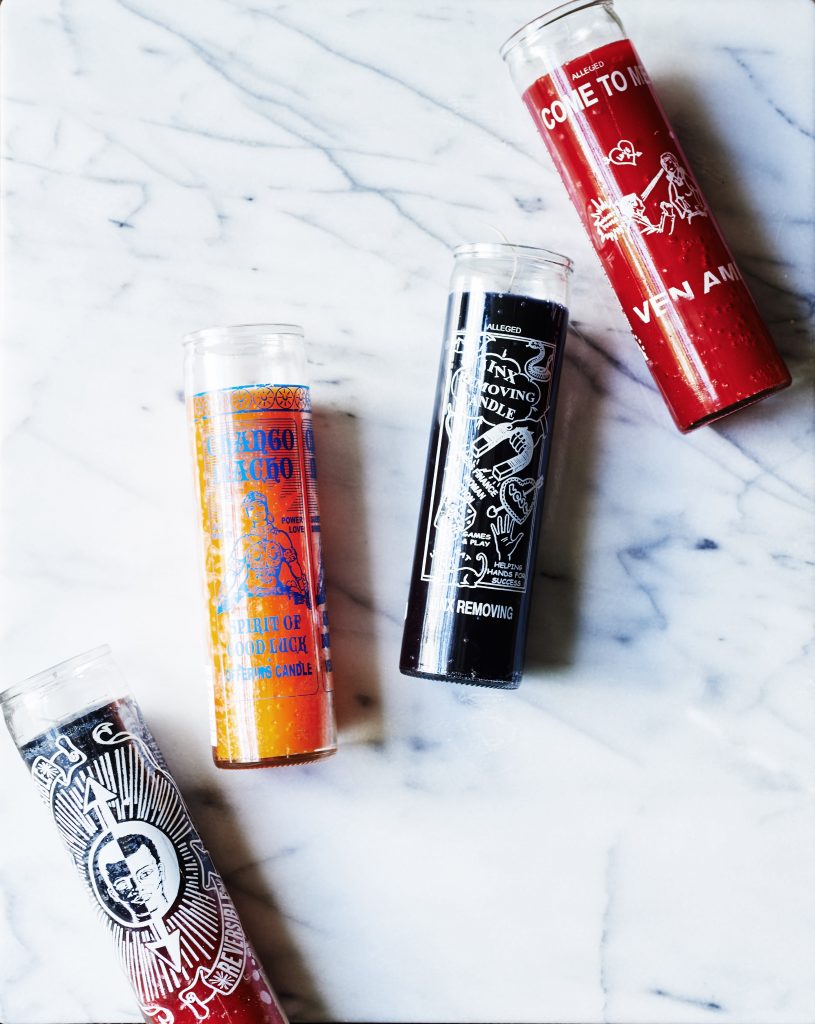 “With this candle, it’s now dressed, it’s ready to do its job, all you would need to do is light it and let it go. As the candle burns, it’s taking that intent you put into it and sending it to the universe.” She warns me to never blow it out, because breath is intent and if you blow it out, you’re saying you’re done with your intent. Instead, if you must extinguish it while you leave the house, you can suffocate the flame with a plate or other tool.

Rebecca is a bit like a “Draconis Arcanum” herself, tucked away on Trinity Lane in deep East Nashville, her shop full of magical treasures. She is becoming less and less “arcanum” with so many locals approaching her for aid in their spiritual journeys. Rebecca and Draconis Arcanum are only here to help.