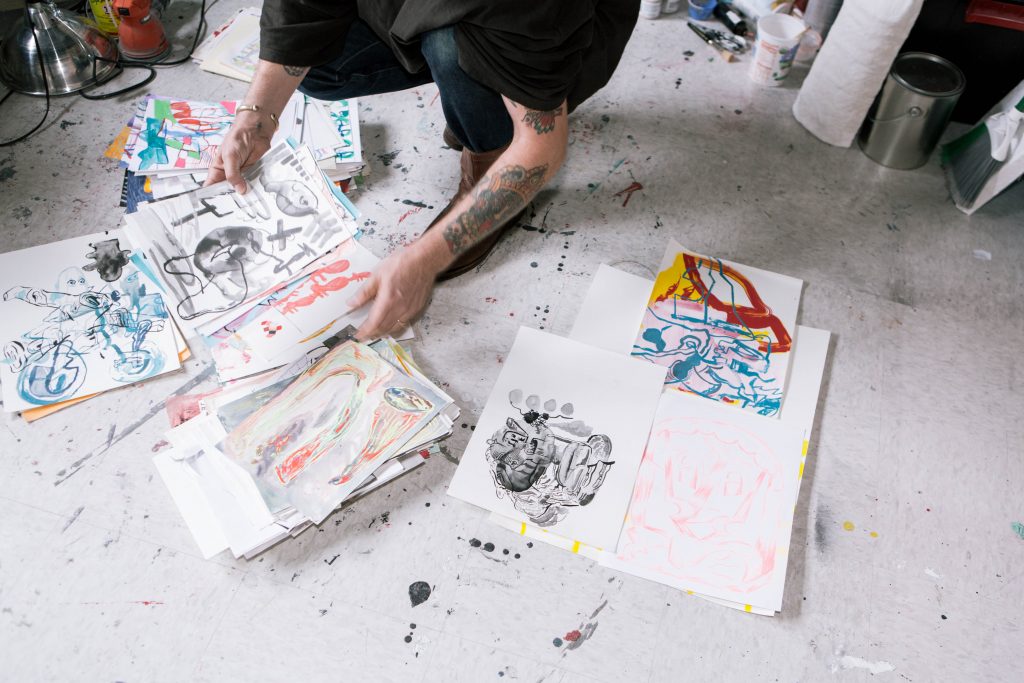 One of the many, many things the internet has ruined for us is denotation. An example: goals was once an actual word that signified a lofty, hard-earned end—something one might spend his or her entire life striving toward. On the internet, however, goals is a hashtag at best and a listicle headline at worst, denoting everything from culinary prowess to “impressive” nicotine consumption (there are over five thousand posts on Instagram with the tag #vapegoals right now).

The point: saying someone is #lifegoals or #artgoals doesn’t mean a lot these days. However, if these terms could ever accurately describe anyone, it’d be Josh Elrod.

After growing up in Nashville (he’s a graduate of Hillsboro High) and attending the Art Institute of Chicago, Elrod moved to New York and worked as a model (he starred as a studly handyman in an early-2000s Levi’s ad), an accomplished musician, a PA on Harmony Korine’s Gummo, and a Blue Man (he’s played around the world with the famed performance troupe). In 2014, Elrod and his wife, Ivy, who is a playwright, actress, and former Rockette, relocated to Josh’s hometown to open showroom and design shop Wilder. The shop—along with the Elrods’ home, “The Rachion”—has been lauded by national and local press alike. Someone on Twitter has more than likely described them as #marriagegoals.

Various goals and internet points aside, Elrod is now showing his latest exhibit, Mixed Episodes, at the Julia Martin Gallery. It’s an apt title: Elrod mixes materials like mica, glass beads, and acrylic to create paintings that, on the one hand, inspire meditation and serenity; and on the other hand, imbue viewers with a sense of motion and action. As Julia Martin described one piece in a recent Instagram post, “It evokes a sense of peaceful power, charging viewers with strength and focus.” There’s also a series of delightfully vulgar small works on paper, which will make you laugh, cry, or both, depending on how you’re currently coping with the state of this world.

We caught up with Elrod to talk genitalia, dark carnivals (not the Dark Carnival Insane Clown Posse wrote an album about), and painting with your “bad” hand. Check out the Q&A to follow, and catch Mixed Episodes now through November 24 at the Julia Martin Gallery. 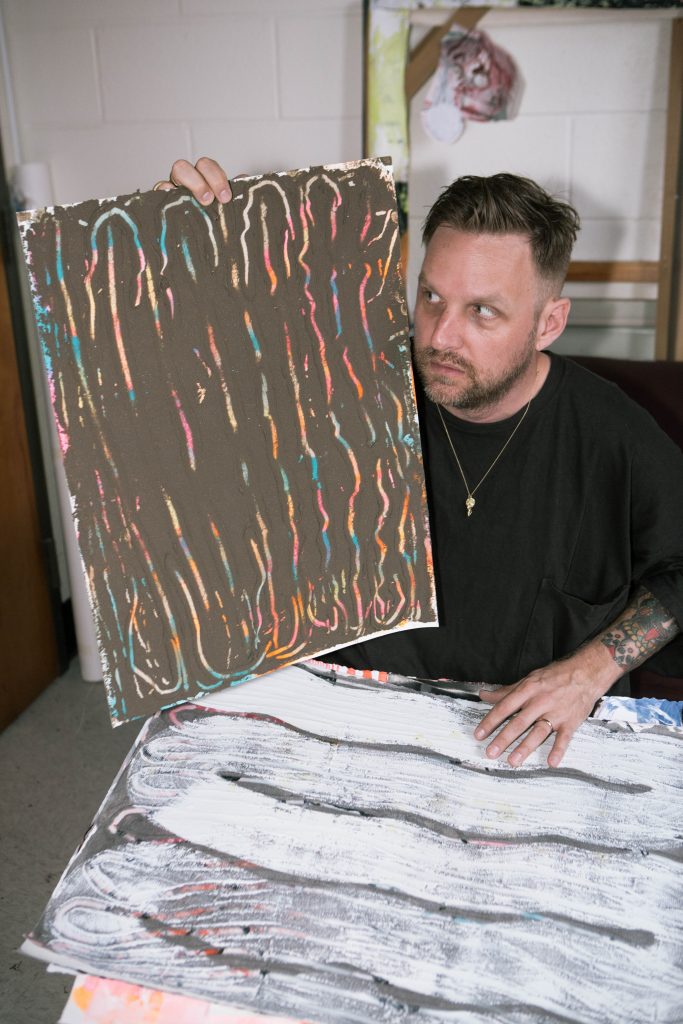 Other than giving you the actual physical space necessary for working in large format, how did your move back to Nashville impact your art?

Moving back to Nashville has allowed me time and a gentler space to open up the channel. Living in NYC there was so much vying for mental space, I had forgotten how quiet the South can be.

How has your background as a performer influenced your approach to painting?

I’ve learned how to make a fool of myself.

You’ve said your work deals with a “grotesque carnival of people, energy, machines, and colors.” What’s the inspiration behind this “carnival,” and who/what are the people and things that populate it?

Even though that is part of my last artist statement, I am not sure I can back it. I’m not entirely sure what my work deals with. Sometimes it deals with “What happens if I use a chopstick to carve into this paint?” or “What does it look like if I add sand?” or “This shape needs genitalia . . .” Mainly it’s space between head and heart, the unconscious—that’s what interests me. Maybe there’s a carnival in there though . . . that would account for the smell and noise.

Some of the work in Mixed Emotions—specifically the small works on paper—calls to mind Ralph Steadman or Gerald Anthony Scarfe’s more satirical pieces. Is there an intentionally sardonic or comedic element to your work?

My only intention is to be truthful—or to lie really well. There isn’t any intentional comedy or sardonic element, but I’m happy if that appears. It’s hard to be comic in painting, I think. Steadman was an early influence on me, partly because he was fearless in his willingness to depict the grotesque or absurd.

I think society has always been grotesque. Human beings are just really bizarre. I think we’re just inundated with it in the Information Age. When our leaders say something hyperbolic or disgusting, we get it in real time. It’s the zero lag time of the idiots on parade. To make anything in this climate feels heroic. Apathy and anti-intellectualism are a cheap drug, and there are so many addicts. I don’t claim anything, however, other than that I was able to get out of bed and get into my studio. 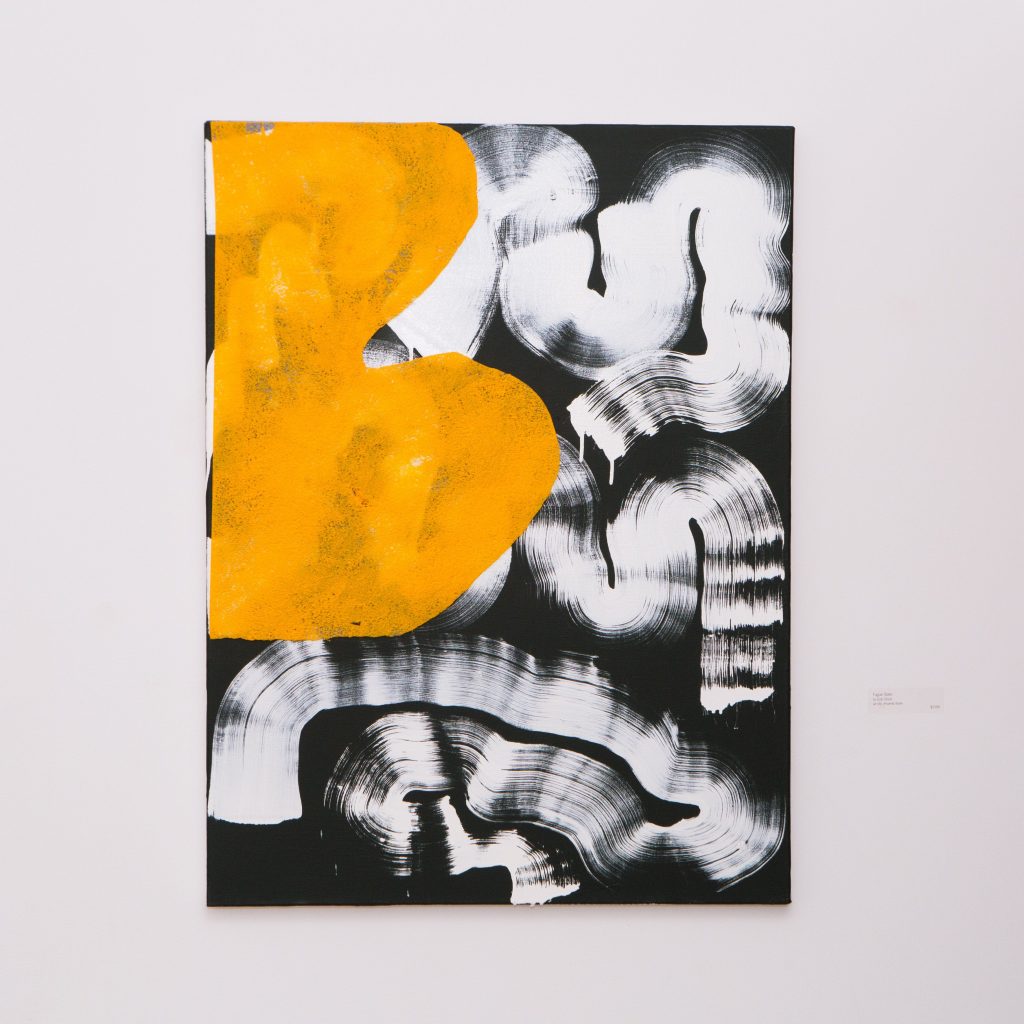 Mixed Emotions was informed by a “meditative” and repetitive process. What specifically did that process look like, and how did it differ from your approach to previous projects?

I was in my studio this spring, and I started a painting. Three strokes into it I realized I was using my nondominant [right] hand. I had an out-of-body experience when I recognized this. I decided to make all the work for my show with my right hand at that moment, to see what it might have to say. It’s like hearing a stereo recording for the first time for me: not necessarily better, just another dimension, right there.

Do you have any upcoming projects—whether it’s art, music, or something Wilder-related—that you’re excited about?

I’m working with my wife on a presentation called “Volume” for Nashville Design Week that will feature over a dozen local designers, and I am hoping to get to play drums and record with Cassie Berman [of Silver Jews] because she rules.