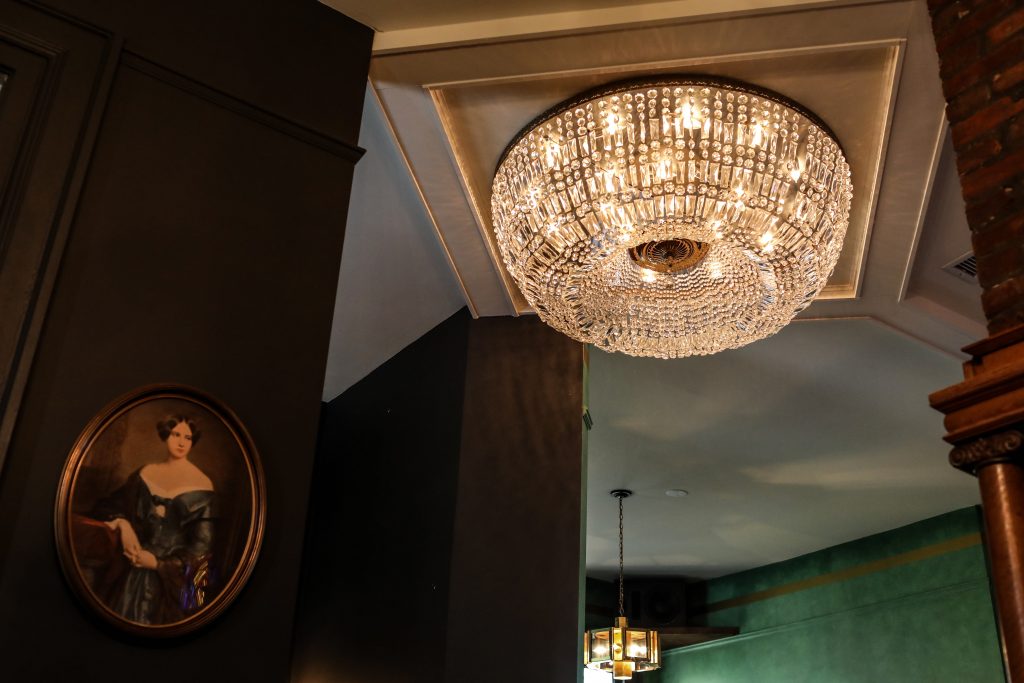 When I knock on the front door of 1102 Forrest Avenue, I hear Jim O’Shea, cofounder of new bar and restaurant concept Rosemary & Beauty Queen, yell, “Come on in!” I make my way through the one-story house and find O’Shea and his partner, Andrew Mischke, on the back patio, taking a smoke break in the sun. Rosemary, the first of the two bars, is set to open in a couple of weeks, and it’s crunch time.

The night before, Mischke, the former general manager of Mercy Lounge, returned to his old stomping grounds and hopped behind the bar for the first time in four and a half years “to kind of dust some rust off before we open here,” he says. “It’s like riding a bike though.”

Mischke and O’Shea met more than ten years ago, when O’Shea was bartending and planning events. Mischke, thirty-seven, convinced his friend to come work with him at Mercy, and the two bonded over common music tastes, booking bands like Miami Horror and Yeasayer at a time when they weren’t regularly coming through Nashville. All the while, they stayed on the lookout for opportunities to open their own place.

They liked the idea of channeling their years of experience into something of their own, where they’d have creative control. O’Shea found himself asking, “Why are we doing all this for everybody else when we can be doing it for ourselves?”

Then, two years ago, Mischke’s real estate agent wife came to him with a suggestion: a 1200-square-foot yellow house she’d sold to some friends was available to lease, and she urged him to take a look. 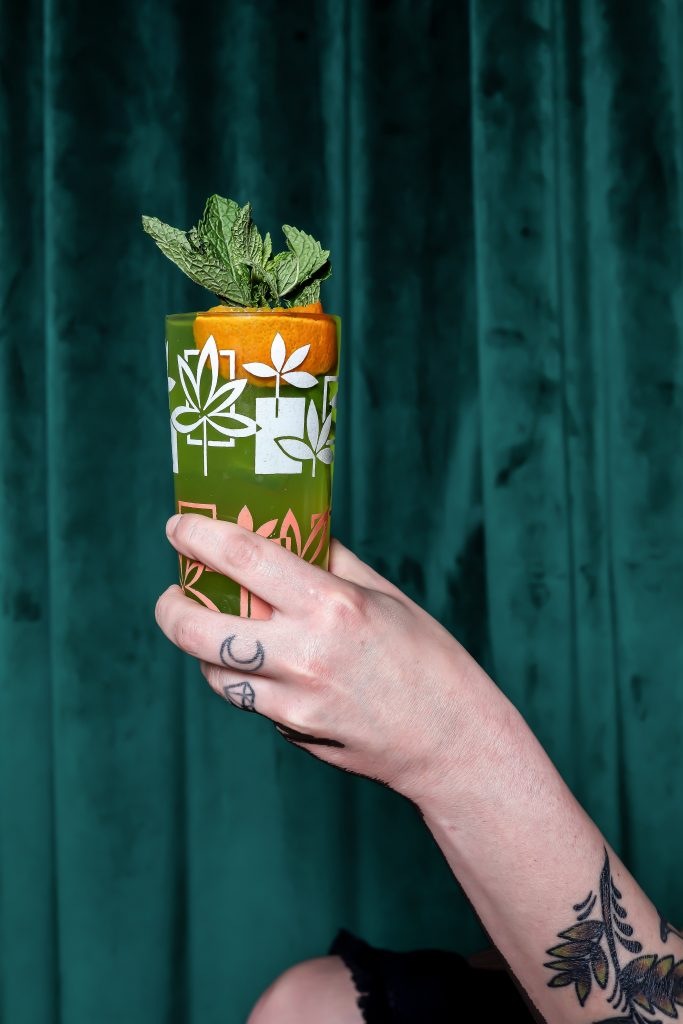 “It was like, ‘Listen, if something cool comes along we think we can work with, [we’ll take it]’ . . . This was probably the fifth place that came across our path, and we jumped on it,” says O’Shea, thirty-nine, sitting on a plush green ottoman in what used to be one of two bedrooms in the house. “It definitely helps to have a significant other in the real estate world to hear about locations and stuff like that, for sure,” adds Mischke.

He called O’Shea, and they decided it was just what they’d been looking for. Rosemary will live in the main house, while Beauty Queen will take up residence in the attached garage, existing as kindred businesses connected by a courtyard. Both will offer food and drinks, with a few slight differences that O’Shea and Mischke are still working out, and customers can wander back and forth and pay wherever they end up.

The space dictated the concept, and O’Shea liked the idea of a multidimensional experience. Years ago, after he told a friend to meet him at a local bar, she replied, “Aw, that place is like an above-ground pool.”

“I was like, ‘Well, what do you mean?’ and she said, ‘Once you get there what do you do, you know? Once you’re in, okay, now what?’” he recalls. “I thought that was kind of a good analogy. We didn’t want to be an above-ground pool. We wanted to be a kind of triathlon of sorts . . . If you get bored with a certain aspect here, there’s always something else you could check out.”

With the exception of some minor tweaks outside, the 113-year-old house looks much the same as it did before. But Mischke and O’Shea redesigned the interior, removing walls and adding built-in bookshelves. The bar features jade-green tile by Red Rocks Tileworks and is flanked by two colorful stained glass windows. Though this all might sound a little posh, they also made sure to maintain the integrity of the space—O’Shea found most of the furniture at flea markets and antique stores. 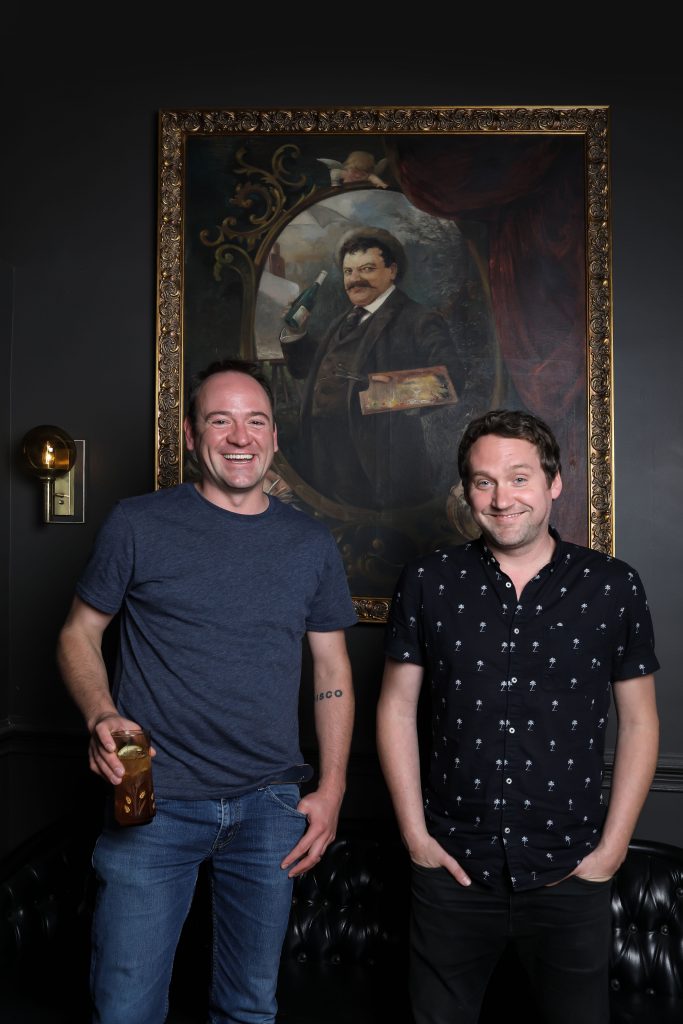 They took that same approach to the venture as a whole, as they sought to fill a void in the bar scene while catering to the neighborhood they love.

“My first place out of my parents’ house was in East Nashville in like 1999, right after the tornado,” Mischke says. “Both Jim and I have lived here the majority of our lives and seen the way that this neighborhood has developed . . . and it’s just exciting to be a part of that, particularly when it’s in a neighborhood that you lived in before you could legally drink.”

They see Rosemary as the kind of place where a gregarious, well-dressed neighbor might host friends—a refined yet unpretentious space in which you can drink what you like and unwind.

“If you want to come in and you want a vodka cranberry, yes, you can have a vodka cranberry—we’re not gonna look at you funny for it,” says O’Shea, who, like Mischke, is wearing a hoodie and jeans. “And if you really want to hurt yourself, we’ve got a Fireball shot for you.”

For those customers who like the finer things, they’ll have a few specialty drinks, including their take on a piña colada—“Just the sweetest milkshake thing you can get,” says O’Shea. There’s also a Paloma that was dreamt up with the help of head bartender Alise Alicardi, or as O’Shea calls her, “Our head huckleberry.”

Chuck Anderson, owner of the Death From a Bun food truck, will head up the kitchen. Anderson, who is an Air Force veteran, developed a taste for bao (steamed Chinese and Taiwanese dough buns) during his travels and opened his truck last year when he couldn’t find the buns in Nashville after moving from New York. Anderson incorporates local and international flavors and will serve up buns with fillings like pork belly and Philly cheesesteak. Although they’ll have table service later, for now, he’ll park his truck out back before moving into the main kitchen, which will operate out of Beauty Queen when it opens later in the year. When that’s up and running, he also plans to expand the menu. 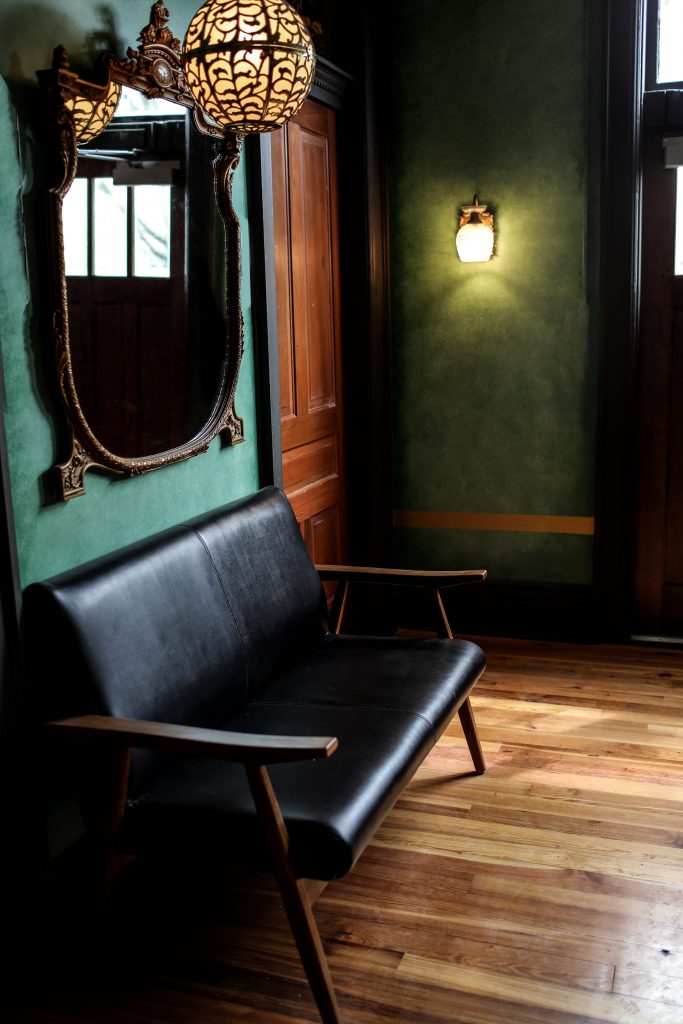 Mischke and O’Shea share their desire to create a tasteful neighborhood nightspot with other Nashvillians, and they’ve attracted a host of local investors like Mark Watrous, guitarist for The Shins, and Jaren Johnston, lead singer of The Cadillac Three.

“It’s one of the coolest things about this,” says Mischke. “Having a lot of people that you know [who] believe in something and want to see it work for the same reasons you do, because they’re part of the culture in the city and have lived here for a long time . . . I think it’s great that people from all over the world are investing money in Nashville. It’s awesome. I have no problem with it at all, but I also think it’s really cool for us to be able to put something like this together with small money that is exclusively local.”

When they aren’t spinning a “very specific and intentional” playlist curated to set the tone of the evening, they’ll have friends select and play records on the vintage speakers.

“DJ in the very initial sense of the term,” Mischke stresses. “Not the post-Skrillex version. But like, [all the] people that we’ve ever had reach out about wanting to come play music. Everyone from guys who’ve fronted soul bands to local music writers.”

And while O’Shea admits that with greater freedom comes greater responsibility—“I’ve got a lot more grey hair, I’m stressing out and [having] panic attacks and shit,” he says, laughing—he’s happy he and Mischke opened their own place.

“To be able to create something was fun,” he says. “Make something that was our own and is us and something we kind of take pride in. I mean, I’m proud of what we’re doing and I’m not saying I didn’t like the other places we worked in the past, but there’s always things I would’ve done differently and now I get a chance to do those things.”

As we near the end of our conversation, we get up and the guys get back to preparations, running down their to-do lists and talking of plans to hang lights from the trees out back. Before long, they’ll have company, and Mischke and O’Shea hope they feel at home.