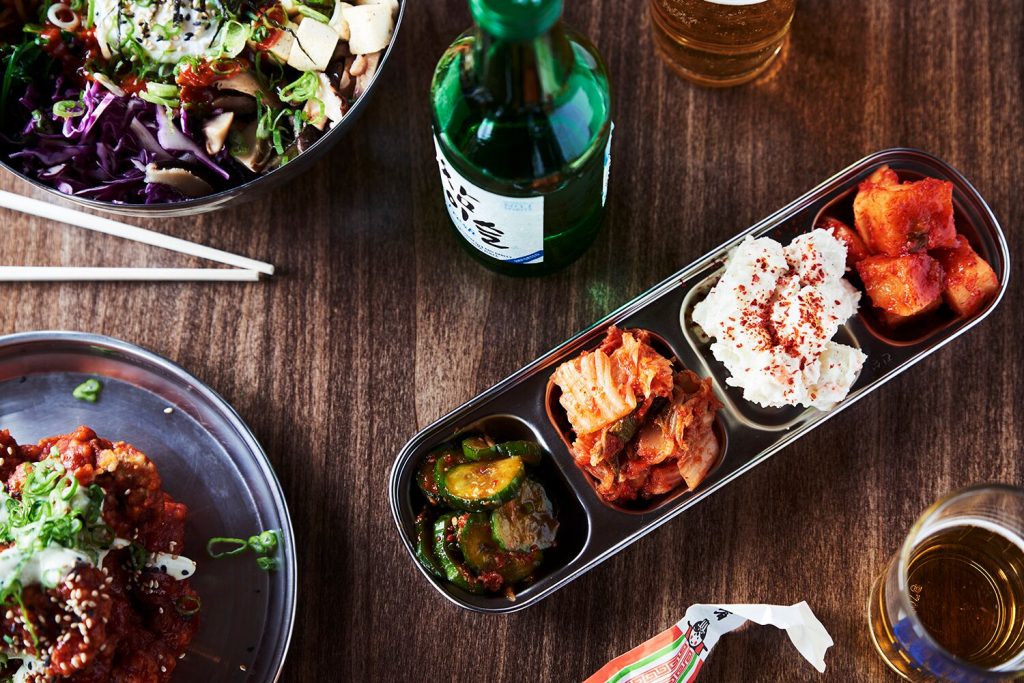 Before the two opened the beloved Five Points bar Duke’s in 2015, they lived in New York City, bartending in the East Village. Plunket was a bartender at the now-closed vegetarian diner Kate’s Joint. Nelson worked at a bar around the corner. At Kate’s, Plunket met Danny Song, who, along with his brother Tim, would go on to open Gaja in East Atlanta. The Korean restaurant (its name translating to “Let’s Go,” a nod to “Blitzkrieg Bop”) opened in 2016 to much acclaim. Nelson, Plunket, and the Song brothers have remained friends since their days in New York, and now they’ve reunited in Nashville. Three months ago, the group of four friends decided to combine their expertise and open Babo, a new Korean bar in East Nashville.

On a dreary Saturday afternoon, I’m sitting in the corner booth at Babo (meaning “pinhead,” another Ramones reference) across from Plunket, Nelson, and Tim, chatting over coffee and Topo Chico. Tim lives in Madison now, but Danny splits his time between Nashville and Atlanta. Babo, located on the corner of Riverside Drive and Porter Road—an idyllic, if sleepy, little stretch of East Nashville—quietly opened in late November of last year.

“The response has been great,” Plunket says. “This is the first press we’ve ever done. We haven’t done any advertising. We basically unlocked the doors and I feel like the neighborhood has been really receptive.” 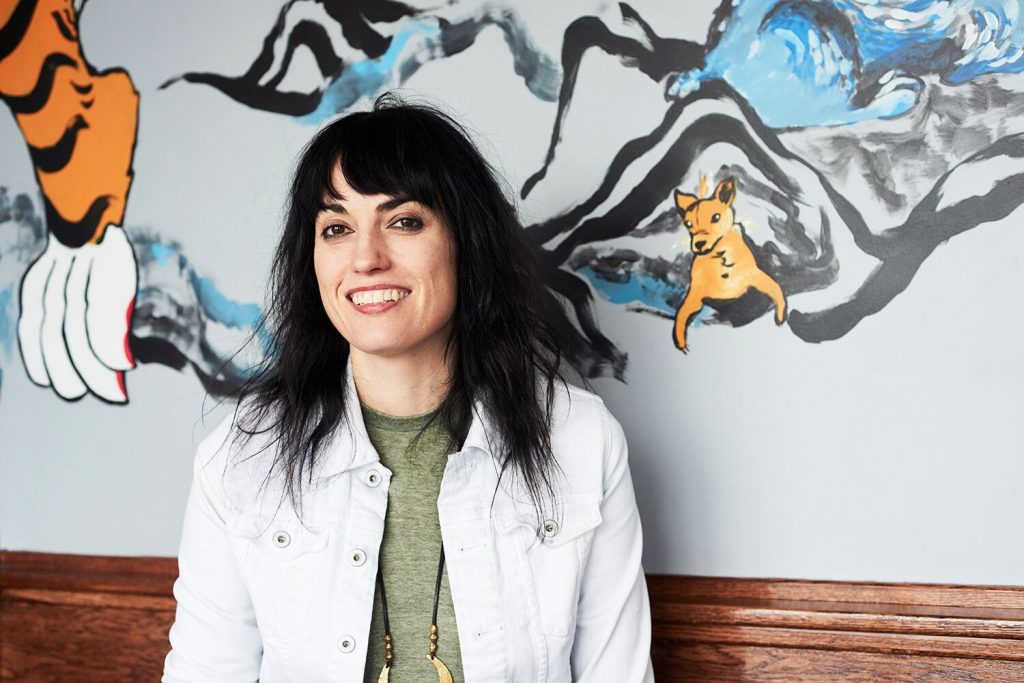 The Field of Dreams approach may seem a little risky, but the group had success with quiet rollouts at both Duke’s and Gaja. Plus, they were committed to making Babo a regular haunt for locals—the lack of fanfare was key in letting their immediate neighbors call first dibs. Even the bar’s exterior doesn’t draw too much attention. It’s painted all black save for the blue and red sign above the door with Babo written in Korean.

“We wanted something that was going to work in the neighborhood,” Nelson said. “We didn’t want to have a place that’s going to be open until three in the morning with bands and craziness or whatever.”

“I think most [customers] are in walking distance these days,” Tim adds. “It’s nice to see so many people that live around here.”

The bar is the former location of Pied Piper Eatery, which was open for almost a decade until it closed its doors in February of last year. Nelson was getting a haircut when she heard the restaurant was closing and, with the help of some friendly landlords, snagged the spot for Babo with relative ease.

“We landed right where we were supposed to, I think,” Plunket says. “We’ve been talking about this for two years. And we’ve been actively working on it for a year. To have it be here and look like this and be sitting here right now is very gratifying.” 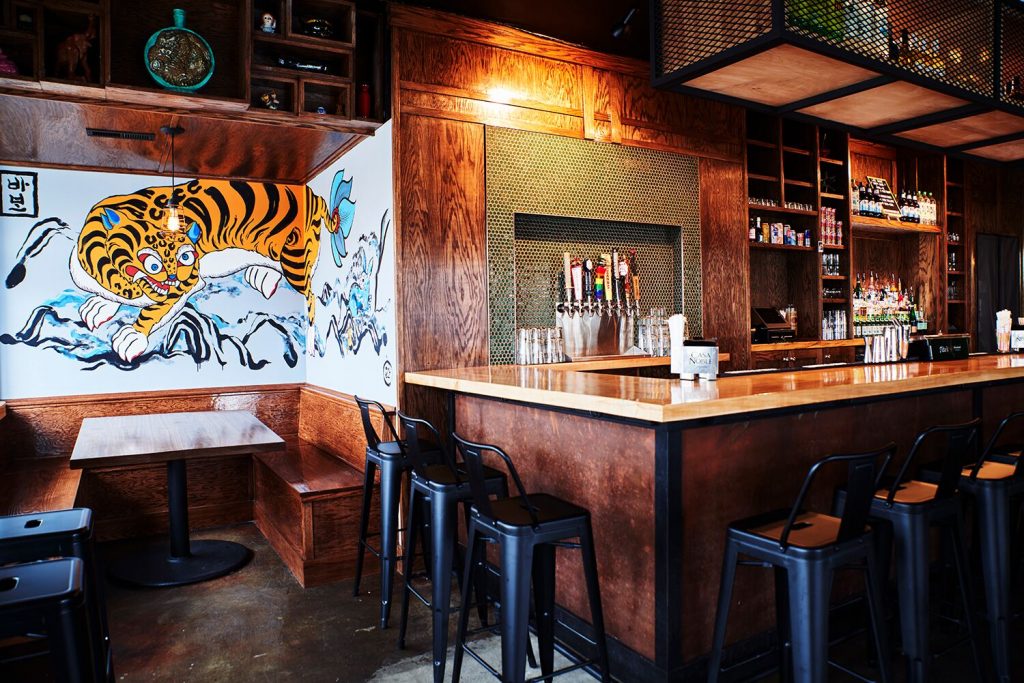 Babo is open Tuesday through Sunday from 5 p.m. to 1 a.m. Children are allowed before eight, and the kitchen closes at midnight. The goal from the start was to make Babo the center of the Venn diagram between the founders’ previous projects—a little more bar than Gaja, a little more restaurant than Duke’s.

Babo’s versatility accommodates a full array of customers, be it local families looking for an affordable dinner—the most expensive menu item is the beef bulgogi at just fourteen dollars—or musicians craving late night food and drinks after playing a show, when most kitchens are starting to close for the night.

“I came in here last night at 11:55 after playing a show at The Basement and ordered half the menu,” Plunket says. “It’s awesome.”

“You can come in here and splurge and get everything on the menu with a bunch of your friends,” Nelson says. “Or you can come in when you’re super broke and spend twelve bucks and get a beer and something to fill you up.” 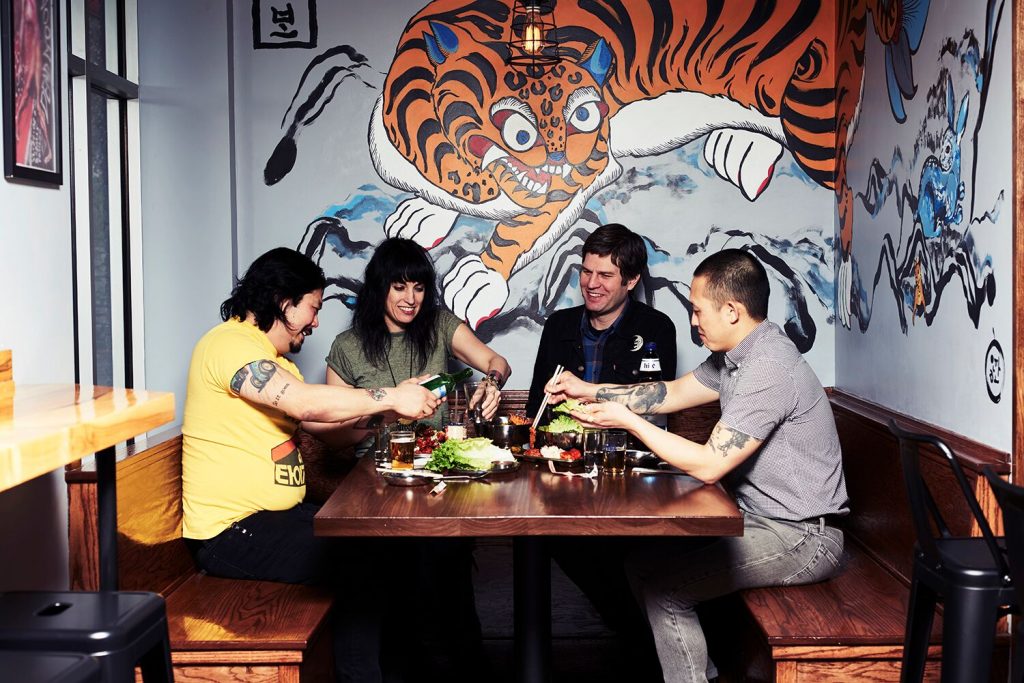 Babo is a departure from most Korean spots in Nashville insofar as it is more bar than restaurant. There are no family-sized portions or wait staff like you’ll find at Korea House or Hai Woon Dai. “We don’t have a maître d’,” Plunket quips. However, with classic menu items like bibimbap and bulgogi, Babo’s kitchen is still true to form.

“It had to be Korean enough to where my grandmother wouldn’t be upset at me,” Tim says with a laugh. “Some people may want a more traditional approach, so we try to stay as close to that as possible. But at the same time, we try not to get too serious with it. We just like to have fun with it sometimes.”

Nashville does not have a large Asian population. The latest census estimates that less than four percent of Davidson County residents are Asian, meaning an even smaller fraction are Korean. Nonetheless, the Babo team wanted the stamp of approval from Nashville’s Korean community.

“K&S people love us,” Tim says, referring to K&S World Market, the predominantly Asian international grocery store on Charlotte Pike. Babo gets all its Korean ingredients from K&S. Plunket adds that they also get a lot of love from the older Korean women that attend a church down the street from Babo. “It’s wonderful seeing the few Koreans that are around stop in,” Tim says.

“I think the biggest difference between the traditional Korean restaurants in Nashville is just the presentation,” Plunket says. “I think [Babo is] very true to the flavors and the spirit of the dishes, it’s just made for drinking beer and eating at eleven at night.” 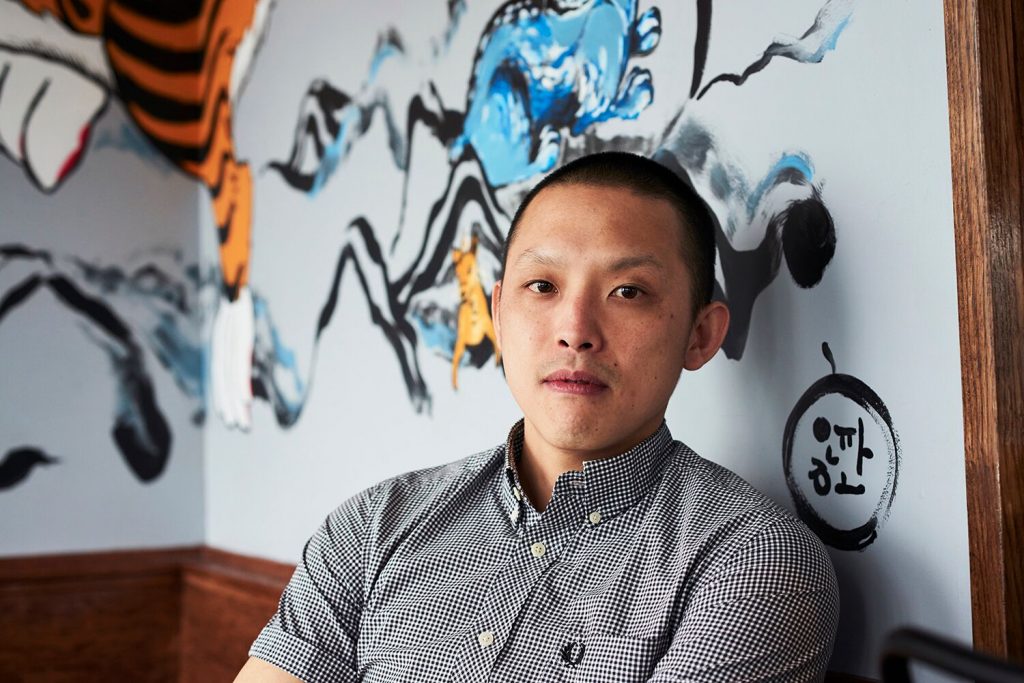 Which is exactly what I do. At 11:30 on a Tuesday night, to be exact. There are about half a dozen patrons when my friend and I walk through Babo’s heavy black door. We order food at the counter and take our number over to the bar where we each get a beer. Per a friend’s recommendation, I go with the pork katsu, a panko-breaded cutlet served with a side of purple cabbage slaw. The wonderfully crispy cutlets are topped with a sweet, tangy BBQ sauce as well as scallions and sesame seeds. Katsu is a traditional Japanese dish, but Babo puts their own Korean twist on it with the addition of a fantastic kimchi mayo. I could devour the dish whole were I not so clumsy with chopsticks (don’t worry, fellow yokels; they have forks. But you know, authenticity). My friend orders the fried chicken, which is also delicious. It’s seasoned with a fermented red chili paste called gochujang, but it’s nothing your local hot chicken enthusiast can’t handle.

Babo also offers numerous vegetarian options; almost half the menu is veggie friendly. Nelson never tires of the prideful, chest-pounding meat eaters surprising themselves by ordering—and loving—the vegan glass noodles. And, she says, they try their best to accommodate any dietary restrictions, especially if the diners are locals that frequent the bar. As Plunket says, convenience and comfort are their two favorite things.

It’s refreshing to speak with restaurateurs who aren’t blinded by an ambition to become It City’s next big thing. When I ask the group what their goals are moving forward, the response is pretty low key: expanding hours, maybe adding an early happy hour in the spring. But you can’t blame them for being reserved. They set out to open a hospitable, accessible neighborhood watering hole—and they’ve done just that.

“We’re trying to be the best Korean restaurant on this block,” Plunket cracks.

Babo is open Tuesday through Sunday from 5 p.m. to 1 a.m.