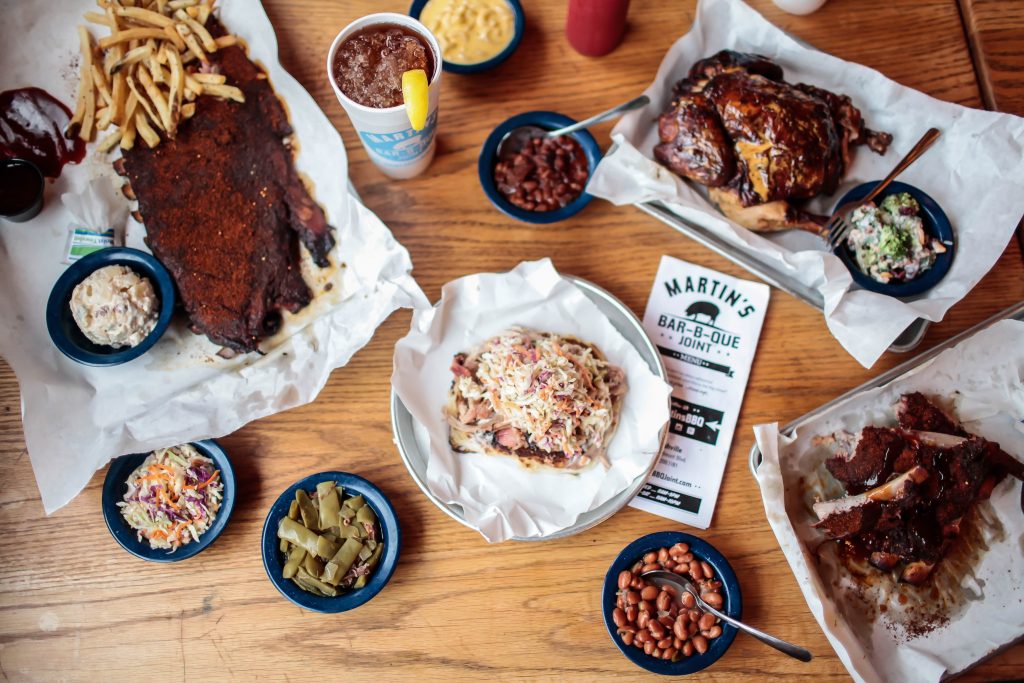 The sound of an electric winch ringing through the dining room at Martin’s Bar-B-Que Joint on Belmont Boulevard is the signal. It’s finally time.

A heavy steel plate rises off a brick-lined pit as aromatic smoke billows out and curious patrons gather round, hoping for a glimpse of something ancient—but also new and unusual for most people—a finished whole hog, ready to eat after more than twenty-four hours of patient, wood-fired cooking.

Questions start flying toward Martin’s founder/owner/spiritual center, Pat Martin. “How long does it take?” “What temperature is that?” Others gape with wide eyes at the unmistakable face of a once-living animal, and the bravest of the bunch ask for samples. Martin fields them all with a smile, happy to share his passion with every last guest.

This is the bedrock of barbecue itself, imprinted in our very DNA and the foundation of Martin’s wildly successful Nashville-based business: the love of meat cooked over an open fire and sharing it with others, personal differences be damned. 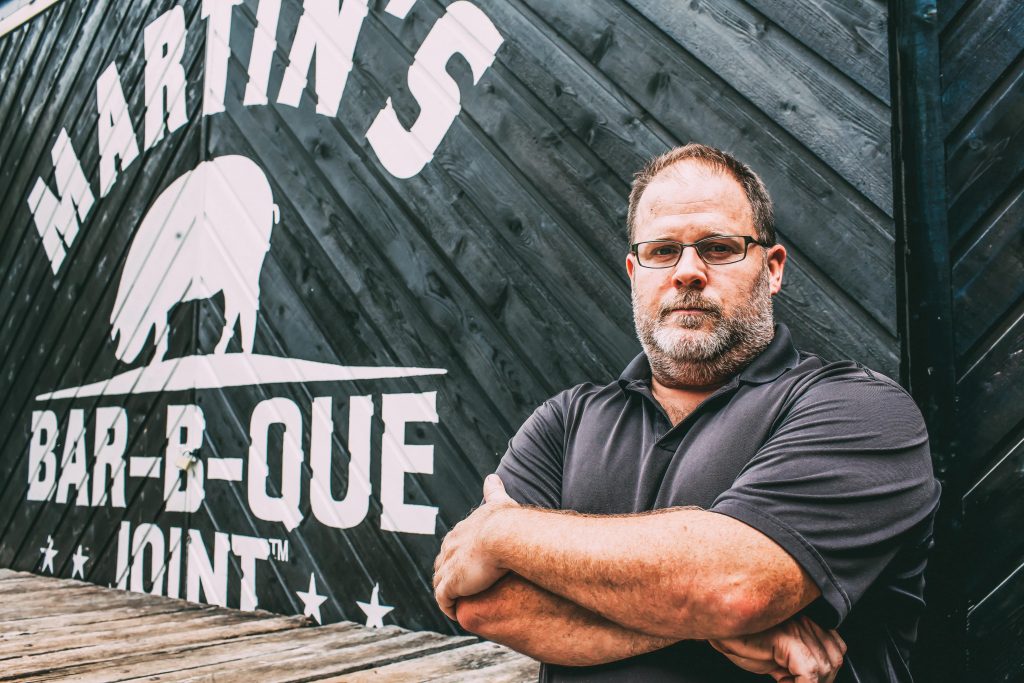 For Martin, life doesn’t get any better than this. He’s been growing his group of barbecue joints for ten years now—three locations around Nashville and one in Morgantown, West Virginia—but he’s been drawn to the craft of whole-hog cooking since he was a youngster in West Tennessee. He still practices that bare-bones West Tennessee style (one of many barbecue philosophies that are as similar and yet distinct as Southern culture itself), but with the massive new restaurant he just opened downtown on 4th Avenue, he’s about to take it to a whole new level.

“If you go about one hundred miles east of Memphis, there’s about five counties right around the Tennessee River that traditionally always served whole hog barbecue,” he explains, tucking into the award-winning pulled-pork sandwich he still consumes, covered in coleslaw, at least once a week. “That’s where I learned to cook it.”

Just as the daily lunch rush begins and a diverse mix of locals and tourists pours in, we’re sitting at a table covered in meaty goodness and chowing down as we talk. Surrounded by clues to Martin’s roots and personality—the walls are covered with down-home knickknacks and pro-wrestling memorabilia—Martin doesn’t really look the part of the focused entrepreneur he actually is. Dressed in a ball cap, T-shirt, jeans, and flip flops, his preferred image is more backyard-grilling good ol’boy—maybe a little gruff at times, but welcoming, quick to laugh, and always respectful, with a true desire to make people happy.

His primary method of accomplishing that goal is through their bellies, and it’s a love that started long ago. 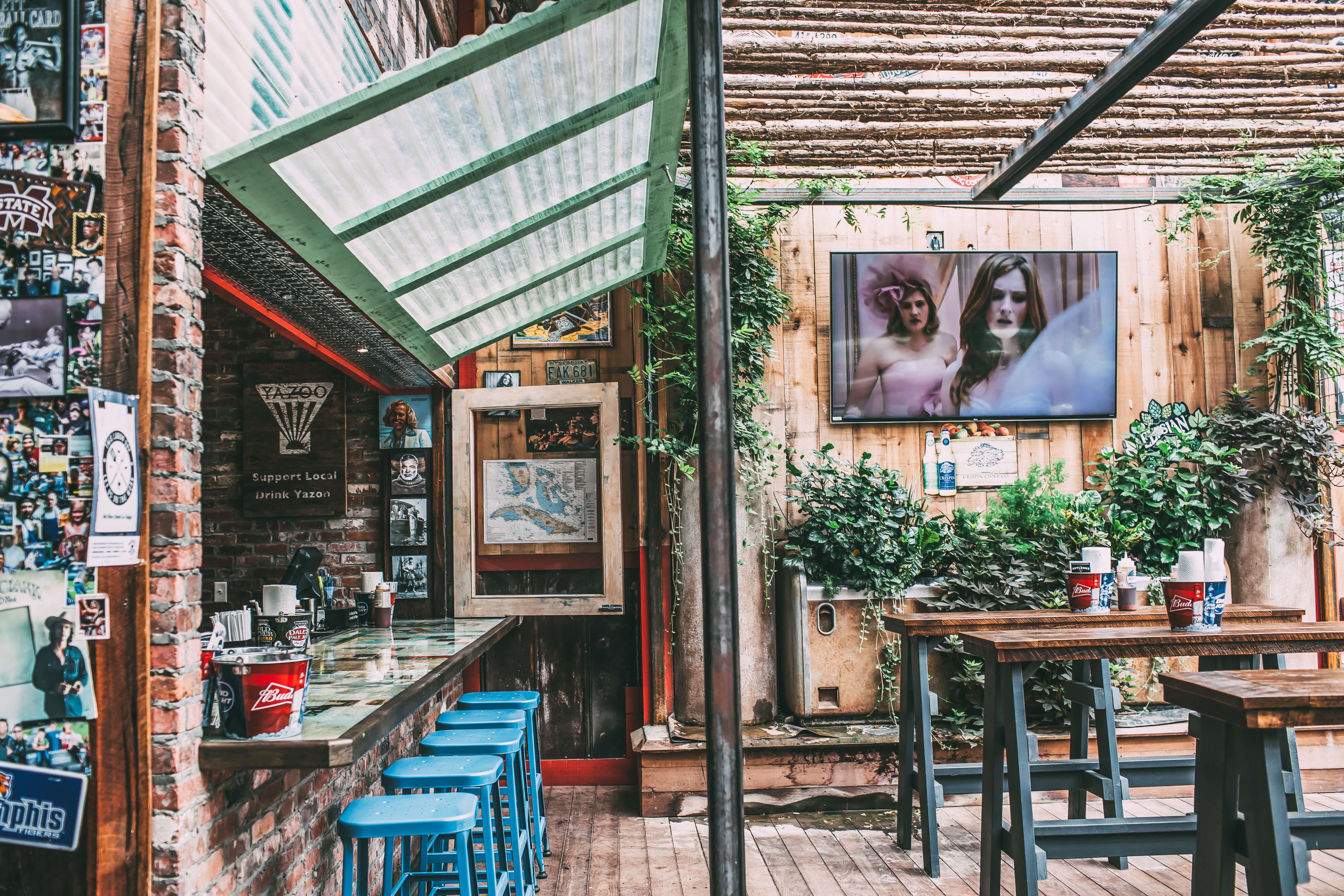 “I’ve been fascinated with grilling and barbecue since I was probably in the ninth grade,” he explains, now squeezing lime on a catfish taco made with his grandfather’s breading recipe. “My dad would grill, my grandfathers would grill, and it was a man’s thing. As a kid, you’re looking up to the men in your life, so it was a cultural thing, but it was also just one of those things I’ve always enjoyed. It really is my hobby . . . Some guys play golf, this is what I like to do.”

A perfectionist by admission, the thing Martin likes to do best is take a 185-pound hog and cook it down over hickory coals. It’s a process he first encountered while attending college at Freed-Hardeman University in Henderson, Tennessee, and he found out just how unique it was.

“I always say, ‘France has their cheese, we have our barbecue. Drive fifty miles and it changes,’” he says. “West Tennessee whole-hog barbecue is a little bit larger hog, we cook at a little bit lower temp, and we pull and serve. In the Carolinas they chop and dice, and when you start going to South Carolina or Georgia, they mop [with sauce] heavily. It’s really the same thing, just a few different roads getting to the same house.”

In Martin’s house, simplicity and tradition meet with a need to have something for everyone. On top of the whole-hog pulled pork, they also offer smoked brisket, turkey and chicken, fried catfish tacos, mouthwatering burgers (the new Dixie Burger is topped with pimento cheese and pork), and more, plus a variety of sides all made from scratch and based on family recipes. There are no freezers or microwaves in the place, meaning everything is made on the spot and when it runs out, there won’t be any more until the next day.

I always say, ‘France has their cheese, we have our barbecue

That still happens quite a bit, and Martin sees it as a badge of honor. While customers might get upset at first, they also appreciate the commitment to freshness, especially in today’s naturally sourced food culture. But when Martin opened up his first restaurant in Nashville a decade ago, that wasn’t the case.

“People weren’t accustomed to that here, and they certainly weren’t accustomed to whole hog,”   he explains, picking up a dry-rubbed spare rib that literally falls apart in his hand. “What they really cared about was a good barbecue sandwich or a good barbecue plate, but they didn’t really care about the differences. I was confident that Nashvillians would start appreciating it, though, and what’s happened is people are educating themselves about what they’re eating, where it comes from, all that romantic, cliché stuff—but it’s not really romantic and cliché, it’s really substantive.”

Much like the rise of the gourmet burger, the renewed interest in authentic regional food has led to a comeback for quality barbecue. Traditional whole-hog joints in rural areas have all but died out due to the economic factors of labor and yield loss (it takes three shifts of pitmasters to mind the fires, and after cooking, that 185-pound hog is down to about 65 pounds), but Martin’s refusal to cut corners has helped his food become a beloved fixture on the Nashville scene.

His barbecue has gone farther than that, though, taking the Martin’s brand to the Today show and into magazines like Esquire and Men’s Journal, and all over the country and even around the world for competitions and demonstrations. But his newest venture might be the biggest leap forward yet. 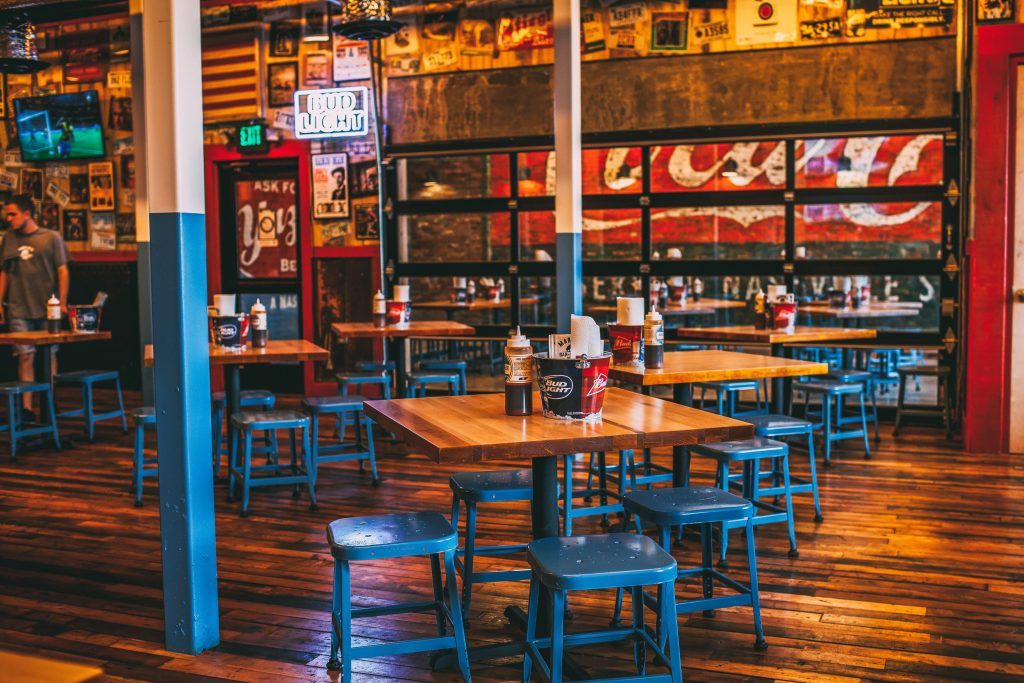 The original part of the building houses a traditional Martin’s dining room and two private areas for catered events, but an old gravel parking lot that once languished out back has been transformed into the building’s second story, complete with a hay-wagon stage, a cozy lounge area made of shipping containers, games like ping pong and shuffleboard, and a spacious courtyard of picnic tables, making it one of the biggest and most inviting hangout spots in the downtown area.

“Really what I had in mind is I want you to come with your friends, y’all get a slab of ribs or a pound of brisket, eighteen wings or whatever you want, and then just go out there and pile up, sit down with a bucket of beer—more like family style,” he says during a tour, dodging workers and issuing directions as the building’s final pieces come together. Then he adds with a smile, “I want to trap you.”

The vibe of the place is the same as all the other Martin’s locations, with knickknacks and wrestling memorabilia covering the walls, a come-as-you-are feel, and hog pits on display for everyone to see, but Martin is really upping his game this time. The scope is truly massive, with quadruple the hog-cooking capacity and plans to take the restaurant to whole-hog-only status (since his other locations only have one barbecue pit each, they’re forced to supplement their pulled pork supply by also smoking whole shoulders). 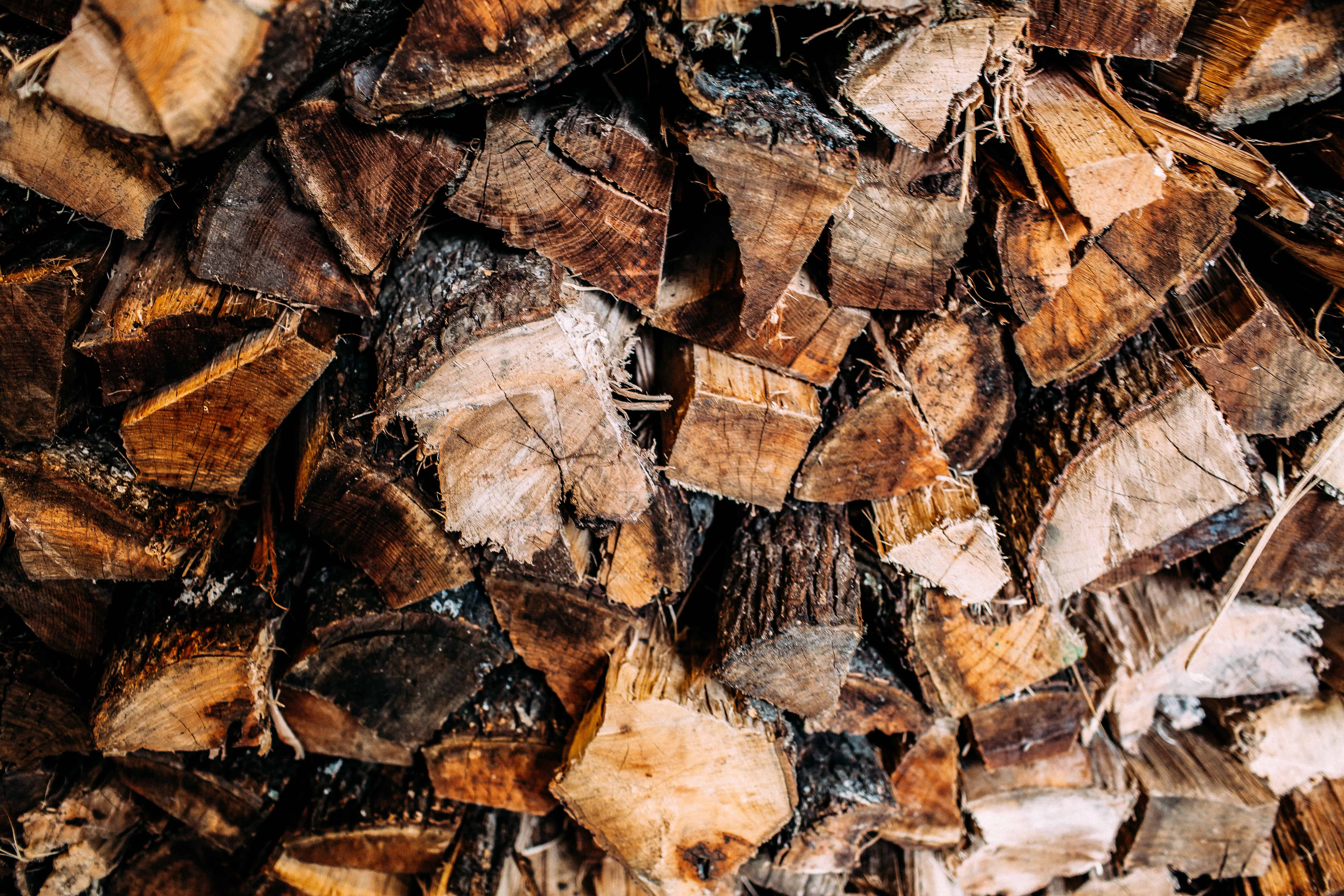 “That’s really me saying, ‘ Okay, ya’ll now get it, you appreciate whole hog, so I’m gonna invest the money,’” he explains.

It’s certainly a big bet—quite possibly the biggest whole-hog barbecue joint in the world—but like a true Southern gent, Martin is intent on staying humble. “The real spirit of barbecue to me is not bragging,” he says, back at the restaurant and blending in with his customers.

“The real spirit of barbecue is just cooking what you cook with humility and trying to make other people happy, using your food as a vehicle for that. That’s the way I used to feel before—I was the guy who would always cook before football games or whatever. You work your ass off and spend all your money just for those smiles. So I’m just gonna keep serving our food and get better every day.”