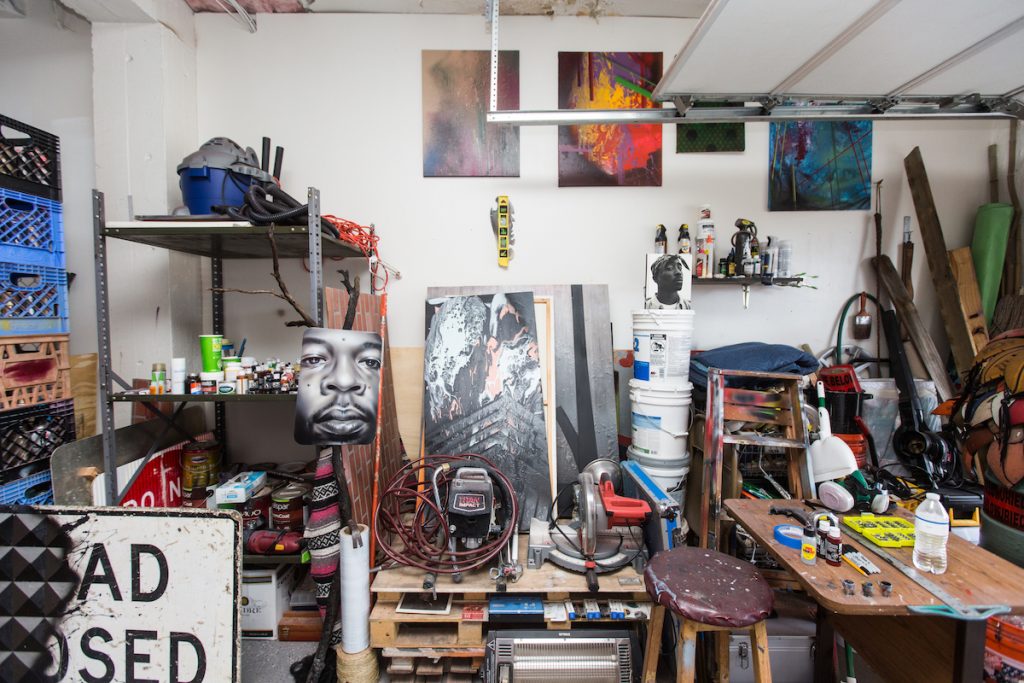 NASHVILLE-BASED ARTIST Brandon Donahue may be best known for his mandala-like basketball arrangements, or “ballflowers.” Most Nashville natives have probably seen his work without realizing it, from murals on East Nashville garages to the enormous Gibson guitar mural downtown (a contribution to the Nashville Walls Project). But for all his public art and his roots in painting, Donahue describes himself first as an object maker.

Basketballs, footballs, hubcaps, liquor bottles, dominoes, chicken bones, hair clippings from a barbershop floor—Donahue samples every kind of black stereotype you could throw at him. He’s owning, dismantling, rearranging, and repackaging them.

“I love things that are ready made,” Donahue says. “It already has its own language, and I can either add or take away from it.”

It’s a perspective similar to object-based work by New York artist David Hammons, who erected three-story-high basketball hoops in 1980s Brooklyn. When the language of your identity is so often formed by the objects that stereotype you, it’s powerful to use those objects to your own end. It also may be one of the quickest ways to communicate with an intended audience. 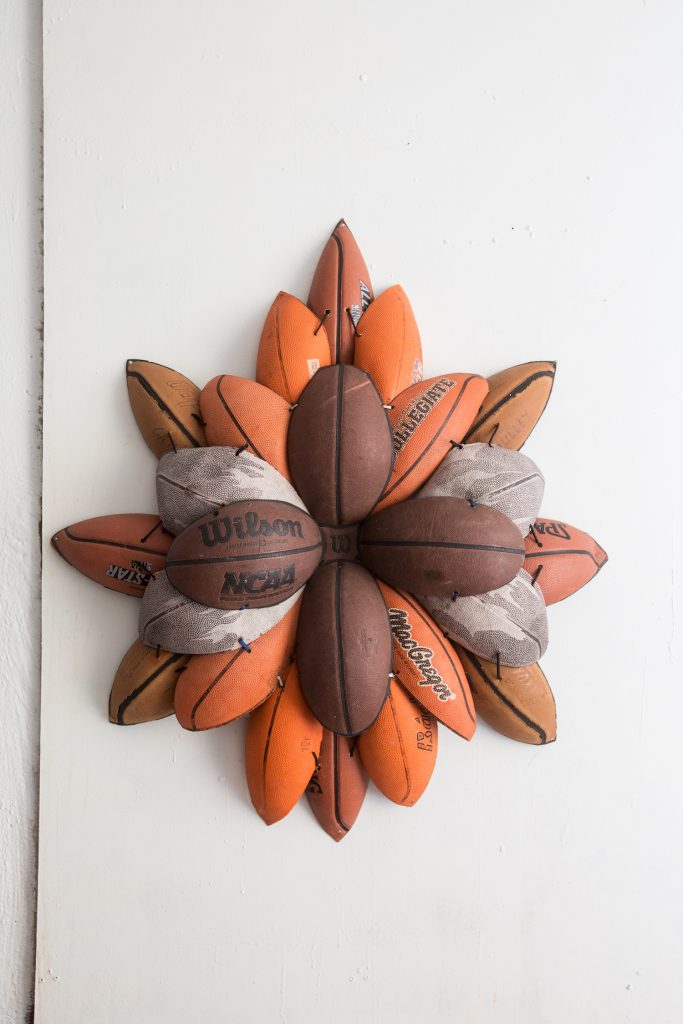 “So for example, the basketballs,” Donahue explains. “When I find them, they’re dirty, they’re used. Millions of hands have touched them already—just the history of them, it’s already there . . . Some people talk to animals, I talk to objects.”

And through that conversation, he’s documenting culture, symbols, iconography, and habits, “a set of things to be passed down from generation to generation.” He emphasizes: “Documenting, while I’m here on earth.”

We’re speaking in Donahue’s studio, located just off Lebanon Pike on the backside of a cable installation company that has “PRINTIN” in big pink neon, the G unlit. His studio is temporarily functioning as his home (that he shares with his Maine Coon, Smokey), which isn’t a bad setup; its secluded entrance and parking lot backyard are surprisingly peaceful.

The studio has two main rooms. On the white walls of the living room hang older pieces next to unfinished work, including a cross-shaped soccer-ball mandala. A broken television sits in the corner, spray-painted in rainbow colors with droplets that look like the screen melted in heat.

"MILLIONS OF HANDS HAVE TOUCHED THEM ALREADY— JUST THE HISTORY OF THEM, IT’S ALREADY THERE.”

The adjacent workspace isn’t quite as brightly lit, and our voices rattle around the concrete walls. If his basketball mandalas are flowers, then the seeds are piled three or four high along one wall—deflated, busted balls of various colors and types. Altered street signs are scattered throughout the room, tucked between cardboard boxes full of spray paint.

Donahue may identify as an object maker now, but his career began with paint, specifically airbrushing. Born and raised in South Memphis, Donahue picked up airbrushing at age thirteen, a trade passed on from an ex-gang member and neighborhood institution known as Fuma. He owned a shop that sold incense and airbrushed T-shirts, and he’d burn you CDs for cheap. Donahue calls him his mentor, a teacher of common sense, “kind of a revolutionary.”

“He wasn’t like a popular, citywide [artist],” Donahue says. “He was a gem. You had to dig for him. He didn’t give out his number to everyone, but he taught me . . . That was my hustle: instead of selling drugs or doing other kinds of crap, I learned how to take art and make a little profit.”

Not only that, but it was a way for Donahue to learn to speak to the public, a particularly useful outlet for a young man with a speech impediment, which he mimics with a rush of chopped syllables. It wasn’t until college, when Donahue studied abroad in Italy and was introduced to tai chi, that the stammer went away. But as a young person, he says, “I felt blessed to be able to have art, because I didn’t have to speak to anyone. I could just draw something.” 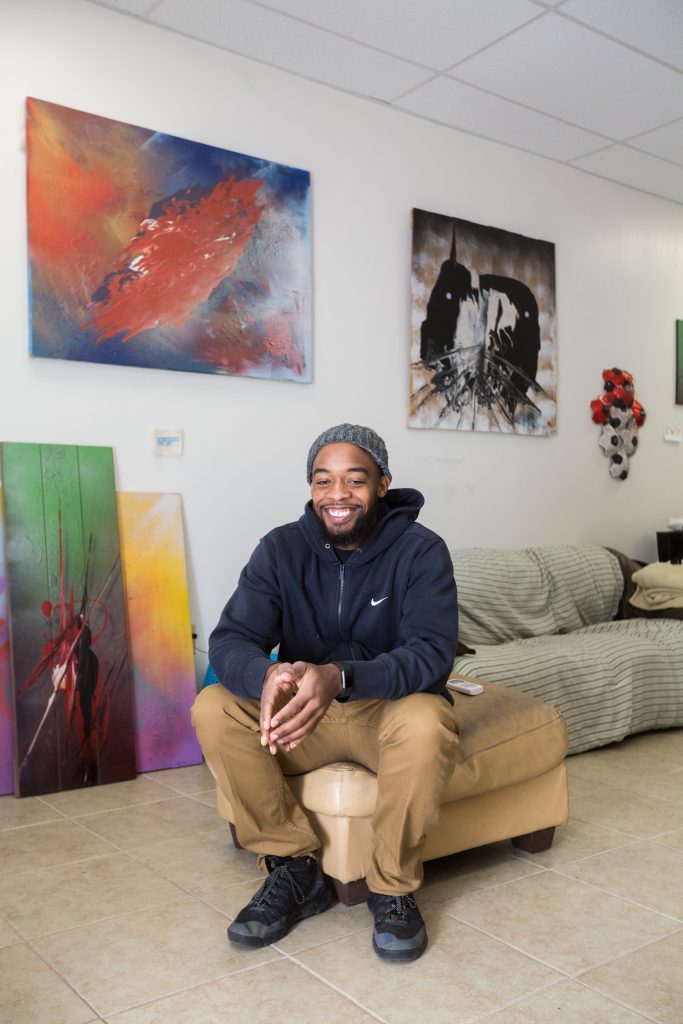 By eleventh grade—at which point he had moved to Nashville with his mom and brother—Donahue was “on a roll,” airbrushing T-shirts and backpacks for high school friends. “Buddies were the public,” he says. “I looked at it as though they were walking advertisements, billboards.”

This relationship with public art is clearly an important one for Donahue, who emphasizes the distinction between street art and graffiti. He’s done both, though he’s recently stopped doing graffiti.

“Street art is the child of graffiti and outdoor mural painting—sign painting as well,” he explains. “Graffiti is originally an element of late ’70s, early ’80s hip-hop culture, used as a voice of the disenfranchised.” Graffiti is usually illegal; street art is commissioned and legal.

He’s been airbrushing for sixteen years, but he didn’t take his art seriously until college. At eighteen, he attended Virginia Commonwealth University in Richmond for art and to run track. He dropped out for two years—“fell in love, worked, almost had babies, could’ve had a bunch of babies”— then returned to school. It took him six years to get through Tennessee State University’s art program, followed by earning his MFA at UT Knoxville. He’s been a professor at TSU for the last three years.

It wasn’t until Donahue’s senior year of undergrad that he began to incorporate scavenging into his work: scrap doors, then orphaned hubcaps and discarded basketballs. It all goes back to his childhood, whether it’s the objects themselves or the act of acquiring them. If it’s trash that someone probably didn’t want, is it really stealing? “People just leave shit around, and I find that if someone leaves something, either it’s going to get thrown away, or someone comes and does something great with it. Or not great, but just something,” he says. “I’m attracted to stuff that’s just left behind.” 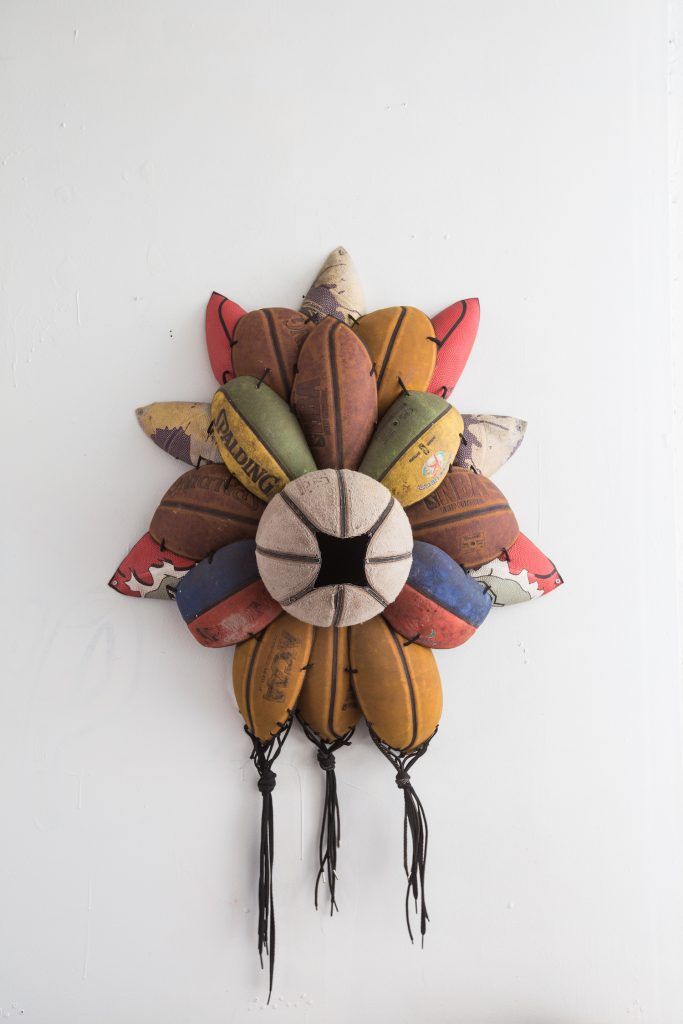 It was also in grad school that he began to play with vacuum-forming objects, heating plastic to form molds around dominoes, sneakers, and liquor bottles. An artist in residence at UTK, Josephine Halvorson, introduced him to an Israeli artist who was vacuum-forming bomber jackets as a commentary on feeling like being “shipped from one country to another.” So Donahue built his own vacuum-form machine, a “bootleg-looking” device that seems half Mad Max and half mad scientist. The completed vacuum-formed work begs to be touched, to be flipped around and checked to see if the dominoes are still stuck in the plastic.

At the moment, Donahue’s basketball blooms are stacked on top of each other. Now he plops them on the floor, though in an exhibition they’d be hung vertically against a wall. But here they look like lotus flowers blooming up from the concrete floor, or like rubber alien spores. Some are still covered in mud, others have names written in Sharpie. Some have strange designs on them, like plaid or a Bugs Bunny pattern.

He describes the process of dismantling that first basketball, questioning the physics of it, wondering about its interior. “I cut it open, and I found the inside of it to be, just void.” Laid flat, the ball took on a flower shape. “I connected a flower budding, something becoming, blooming. I thought about [how] as a child, you want to aspire to be something great, like a flower wants to grow toward the sun. You want to jump higher, dunk.” A basketball is a basketball is a basketball—until it’s not.

Donahue’s ballflowers are often described as “meticulously arranged,” and in a way, they are. And in a way, they’re not. They’re held together with shoestrings. They’re sliced carefully but arranged imperfectly. They are more organic this way, more like something out of nature. That’s intentional, and it’s because of his work’s intersection between hip-hop and folk art.

“Everything was rhythm and rhyme, everything was, to an extent, hypermasculine,” Donahue says of hip-hop’s influence on his Memphis upbringing. “Take that and mesh it with folk art. I learned a lot of things secondhand but not the correct way . . . I learned how to build stuff half-assed, but it still worked. Folk art was where I took that notion of ‘things work even though they’re not flush.’ If it’s a quarter inch off, to me that was a black aesthetic . . . Put some superglue on that shit, turn it sideways. It’s fine, putting towels under the door to stop a [draft] as opposed to getting a door that fits. My work is that way.” 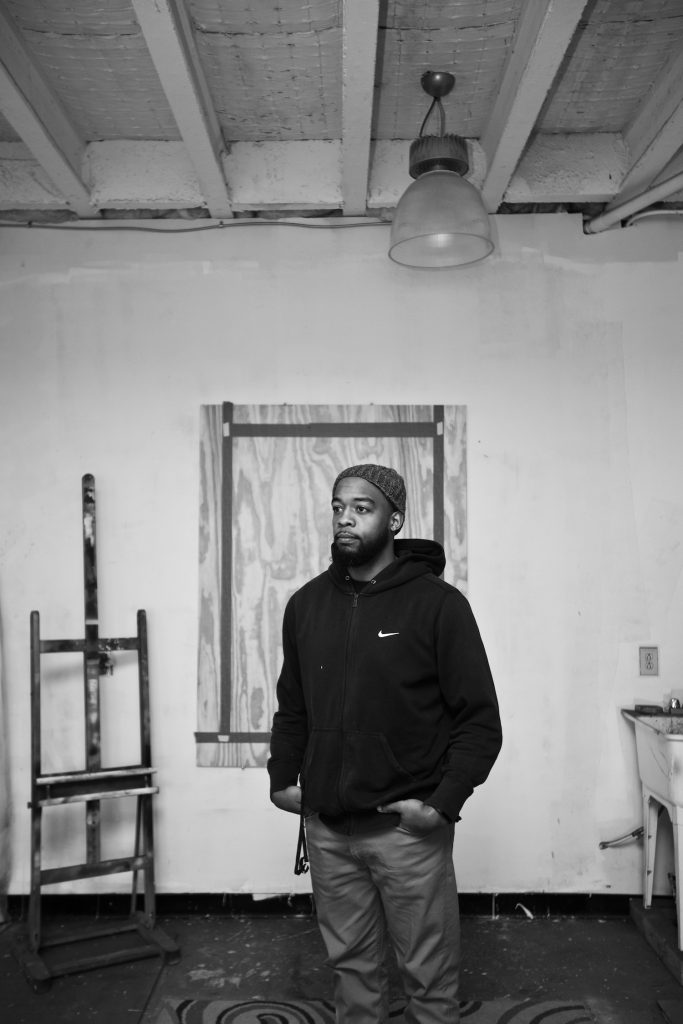 Donahue’s newest works incorporate pieces of wood he collected after the Gatlinburg fire while attending a residency at Arrowmont School of Arts and Crafts in January. There, he assembled his first self-portrait in years by painting his image, placing it in different desolate scenes around the burned-out town, and photographing it. He also borrowed relief ink from printmakers attending the residency, slathered it on a basketball, and dribbled crossovers onto a sheet of paper, another homage to David Hammons.

His most striking new piece features five Gatlinburg logs of descending height, each with a basketball affixed on top, with real hair transforming the balls into faces. It’s Donahue’s Starting Five. Each player has his own identity, his own personality. Hair glued on a Nike symbol (“Hair Nike!” Donahue quips) appears like an intimidating eyebrow.

Although Donahue connects the Gatlinburg-found wood to the hardwood basketball floor, Starting Five initially began as an exploration of black hair and the communal setting of the barbershop. Donahue shows me a plastic bin full of a week’s worth of clippings, collected by his friend Big Keith, a barber at Mohawkz in Antioch (Big Keith even gave Donahue his first wall to paint a mural, when Donahue was still in high school).

Ultimately, each work Donahue creates adds a footnote to an object we already know. But as communal as these questions of identity are, they’re also personal. If Donahue’s hoping to comment on how young black males too often aspire to the NBA, he also acknowledges that he still dreams about being Michael Jordan. Donahue frequently references the concept of double consciousness as explored by W. E. B. Du Bois, of being two things at once: “I’m conscious of myself as a black man and as a man.” And with multiple selves, contradictions are inevitable.

But conclusions aren’t necessary here. What Donahue hopes is for his audience to look again, to reconsider something they thought they already knew. “You can’t dribble it anymore, so you’re forced to work your brain and dissect: What is it then? How can I apply this to what I know? That’s all I want.”