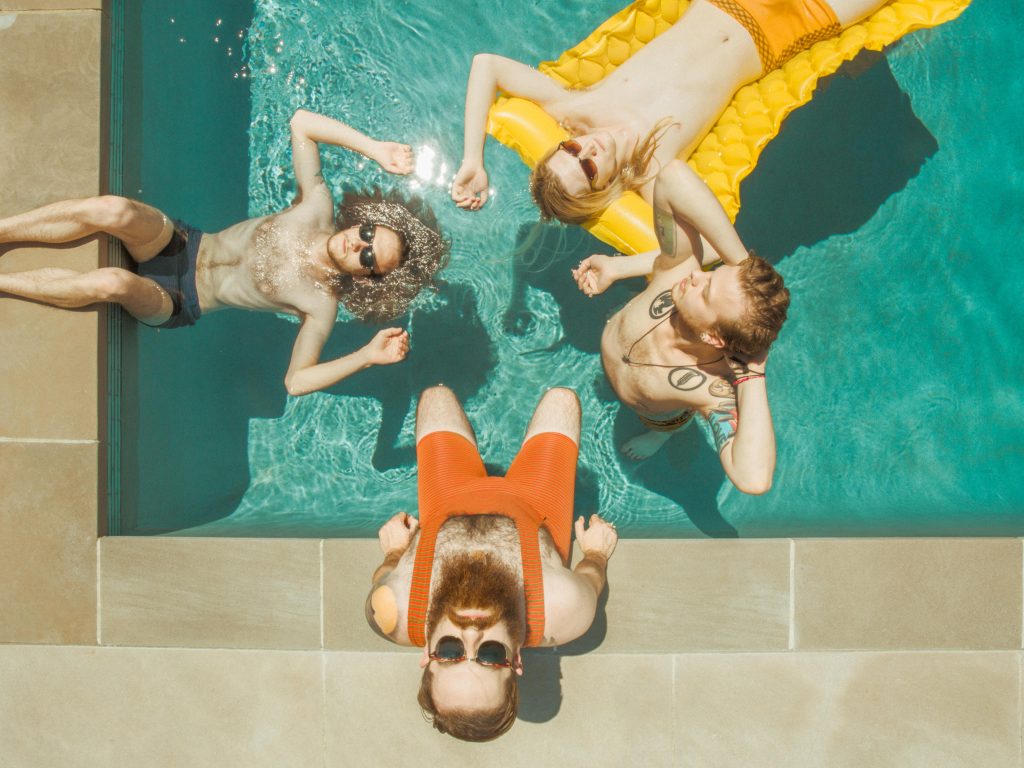 “My dad put an electric bass in my hands on my thirteenth birthday, and from that point nothing else made sense,” says Cole Bearden, the bass player in Creature Comfort, a four-piece indie rock band that sounds a bit like Modest Mouse if you subtract some of the sadness. “And the ball has just kept rollin’,” Bearden says of his band’s momentum after winning this year’s Road to Roo, a contest that places the winner on the same four-day bill as artists like Crystal Castles, Chance the Rapper, and Lorde. Bearden and his bandmates slide into honest drawls when telling stories about their folks and growing up together in Tullahoma, Tennessee.

There’s the one about drummer Taylor Cole’s father, a tall and distinguished doctor who over the years has taken to cleaning lead singer Jessey Clark’s grandmother’s pool.

“My dad would stop on his way to the office in the morning,” Cole says. “I found out last Bonnaroo—we were getting ready to camp together for the first time. [Jessey’s] parents,” he slows his speech some, adding that twang, “they were like, ‘You know your daddy’s Nana’s pool boy, right? Yeah, he’s been going by there the past two years, cleanin’ out the pool.’ I just imagine him out there—for Nana!”

“For Nana!” Clark yells out, and all four guys laugh, imagining the well-dressed doctor skimming Nana’s pool for leaves.

We’re sitting around a cooler on the back porch of the Creature Comfort headquarters, where the band’s studio, rehearsal space, and hang spot are built into a two-story house that lead guitarist Nick Rose rents with a few other Nashville musicians. As the sun sets behind the trees on a hill overlooking Sylvan Park, we try to identify how it is these four friends made it here—how this month, after growing up just miles from the Woodstock of the South and recently winning the four-round, sixteen-band contest, they’ll play one of the stages they’ve been looking up to since they were kids. 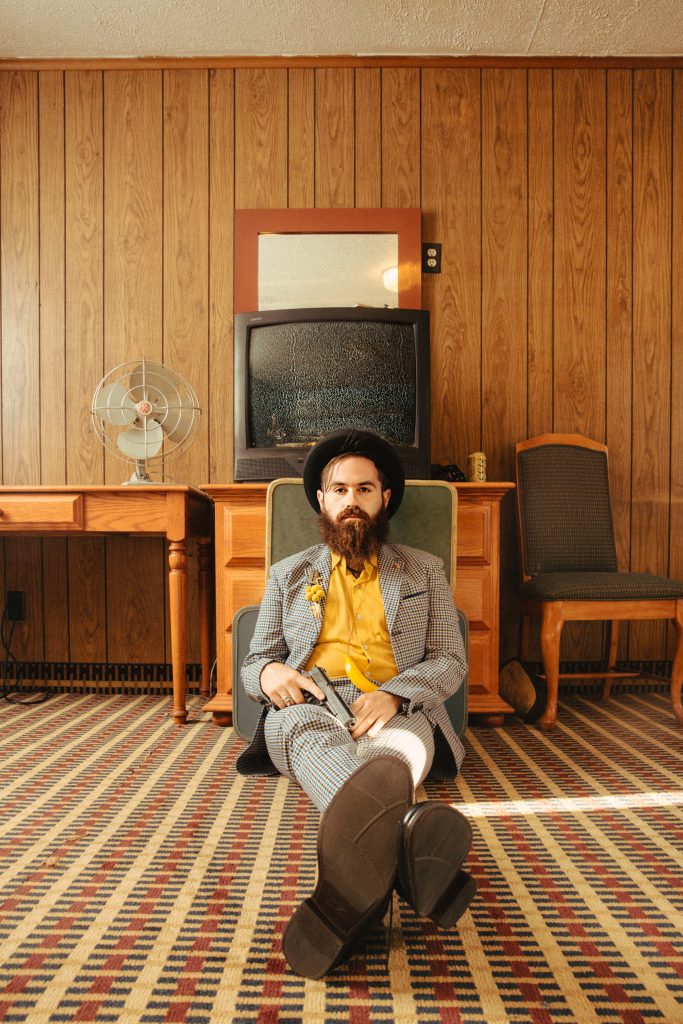 “I’ve been ten times, they’ve been however many times,” Bearden says, leaning back in one of the dining room chairs Rose dragged out for the interview. “It’s huge because we grew up right next to it.”

A liquor store employee by day, Bearden is a kind of Southern sage who heats up as the conversation loosens. “You know, you keep waiting for it to stop rolling, but it doesn’t. You keep following it . . . it’s just fate. It’s just fate,” repeats the self-proclaimed Raphael of the group, with his quiet-to-loud passion about the band. And that’s Raphael as in Leonardo, Donatello, Michelangelo, and Raphael of the Teenage Mutant Ninja Turtles. He offers an explanation of how each member represents one of the heroes in a half shell.

Jessey Clark, lead vocals, rhythm guitar, retail pharmacist by day: “He’s Leonardo because he’s the leader, and he likes swords,” Bearden says, and the band piles on, outing Clark’s affection for Renaissance festivals. The band has gone so far as to accommodate by booking tour dates around Ren festivals. 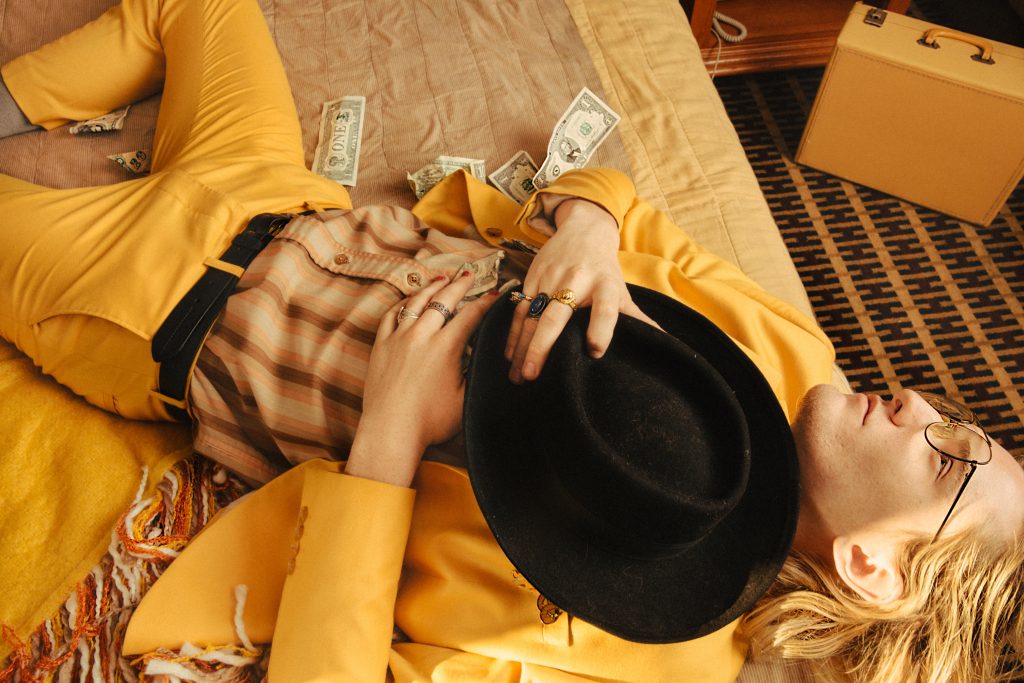 “And I’m Raphael, because I’m an asshole,” Bearden says flatly, anticipating the laugh we give him. “We are looking to fill one Splinter spot,” he says, suggesting that they could use help with some of the regional booking, especially after playing Bonnaroo.

“So what’s it mean, you know, playing the festival after so many years of attending?” I ask.

“What’s cool about this year is all of our families are going to be there,” Cole says. “Our friends we grew up with, our teachers, our principals.”

“I’d never been to a live concert that wasn’t in a bar and grill before Bonnaroo,” Clark says. “I was seventeen, just graduated high school, my parents wouldn’t let me go before I graduated.” 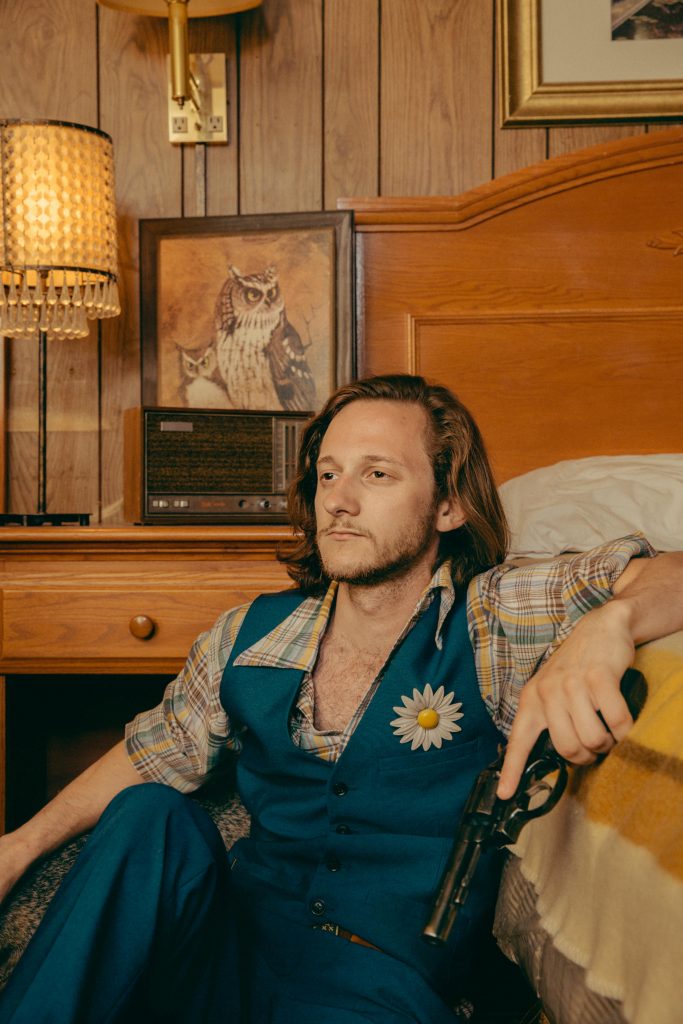 And it’s true—all four rattle off hyperbolic rumors about the Manchester festival that has since become a kind of backyard get-together for the three members who grew up fifteen miles away. It’s difficult wrangling anything linear from the guys as they try to recreate those years in real time. It’s just too much. Too much magic to go around. You can see that those first Bonnaroo experiences, the epic and bleary days and nights, are too much to pin down. But they try.

“Thursday night was the shit!” Clark calls out as the group recreates a working lineup of that year. “I’ll never forget,” he continues. “I was there alone and [MGMT] played ‘Electric Feel’ . . . I don’t know what it was about it. Or My Morning Jacket played really late and it was raining.”

Clark also remembers in 2010 when Thomas Mars of Phoenix—whose voice Clark’s resembles in terms of his ease and a certain boyish, raspy quality—scaled the scaffolding and shared his mic with the crowd as the chorus hit. “It was mind blowing. That’s when I was like, Fuck, I want to be up there . . . It’s when I first got that spark, that ember, you know?” 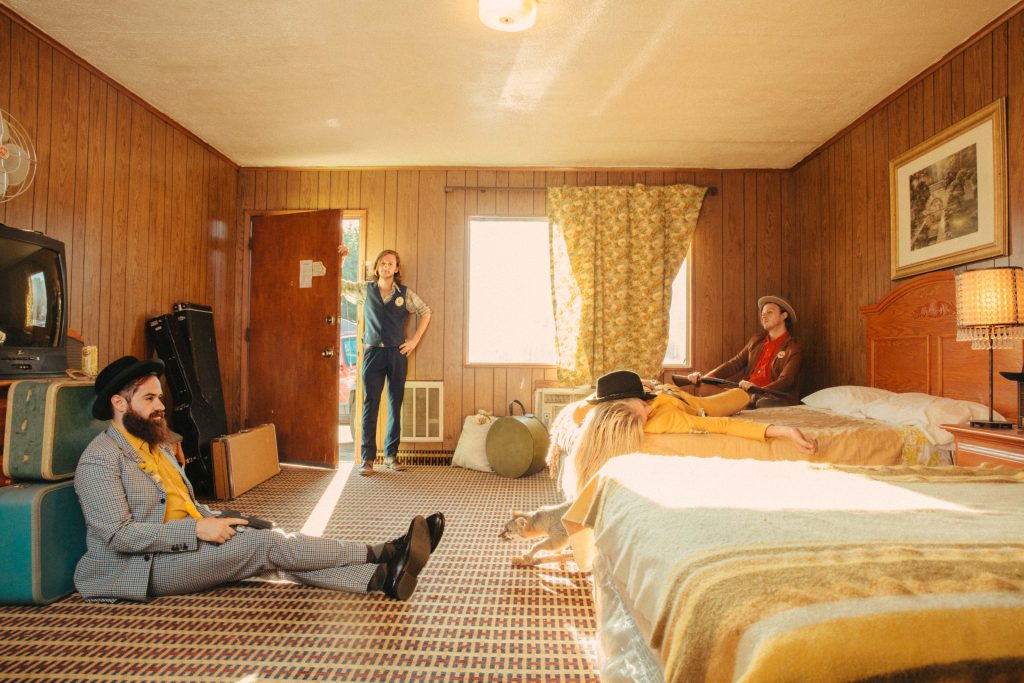 Now, about a decade after those transformative shows, Creature Comfort has earned their way onto one of the Bonnaroo stages, which, for a number of bands who are up-and-coming, can be a turning point. The contest was stressful and forced the band to step away from recording their second full-length, but they had a great time—though it’s hard imagining these guys not enjoying getting out and playing together.

“Music’s not a competition usually,” Rose says of the contest. “It’s a weird thing to [make it into], and we refused to treat it as a competition. We actually got made fun of for making friends with the other bands,” he continues, explaining how they mingled with bands before shows when it could have been contentious. They’ve maintained those Road to Roo relationships since and plan to play with some of the bands they competed against.

“The Nashville final was the biggest show I’ve ever played,” Clark says.

“It was packed,” Rose chimes in. “Which makes it a billion times more fun.”

For the Road to Roo city and state finals, they enlisted a lighting crew consisting of Eric Doran and Ryan Wells—one of Cole’s trusted teams that he uses at The East Room. And then there were flowers. “Instead of receiving flowers, we wanted to give them to people,” Bearden says, describing a chorus of singing audience members climbing the stage and tossing flowers into the crowd. Local florist Rachel Wayne (owner of the The Daily Bloom) provided the flowers that made those final rounds so special.

“We have amazing people around us, and we’re really thankful to have them,” Cole says.

“If you listen to our music, it’s friend-heavy,” Bearden says. “It’s often about the power of community and friendship in general. Those shows really exhibited that.” 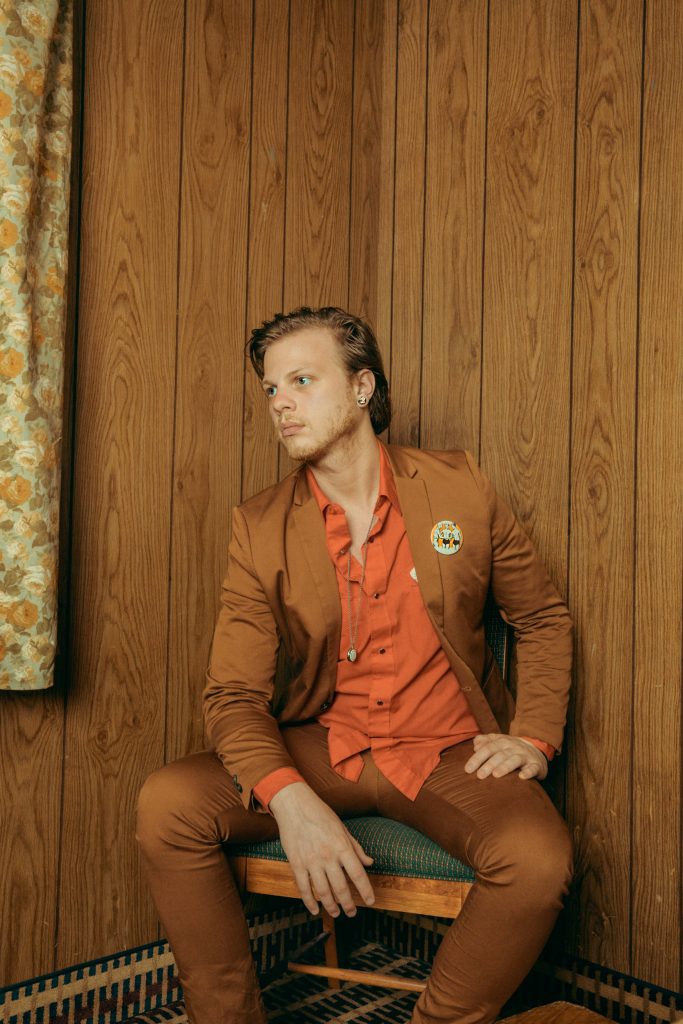 “That’s funny,” Clark says, having never considered that so much of the lyrical content accompanying the energetic indie songs—which have a kind of Death Cab for Cutie sound without so much of the scarves, caps, sweaters, and gray weather—is about friendship.

“But I have the best friends,” Clark says laughing, defending songs like “Friend of a Friend” and “All My Friends” from their 2013 album Fox Tales. As evidenced by their years of making music together in high school, college, and since, to their regular Dungeons and Dragons sessions, friendship is the foundation of Creature Comfort.

Speaking to their escalating, all-in approach to the contest and the way they’ve lined up their lives around the band, Bearden says, “You only get one shot at doing anything . . . I’d hate to piss it all away on something I don’t care about.”

“Yeah, at least for me, I don’t want to be old and have a regret that I didn’t try,” Clark says. He explains that because of the expectation of his parents, who didn’t finish college, he attended and graduated. “If I didn’t do that, I would have been a disappointment, but I didn’t do it just for them, I did it for me. My dad, he used to give me shit”—he dips into his father’s drawl—“‘Well, son, I used to want to be a quarterback, but you know I had to realize it ain’t all a dream.’ But I graduated, and I’m still doing the band . . . ”

“I figured out how to do both,” Rose completes Clark’s thought. All four of the guys have graduated from college and are working and doing the band full time.

Beyond Bonnaroo, Creature Comfort is eager to continue working on their new record and is releasing a song, “Common John (Southern Shame),” this month. The panoramic, self-produced track gets at the heart of who and where Creature Comfort is—stuck between Tullahoma and the city. In the first lines Clark sings, “It’s been decided by the priest I’m just a Common John / Diggin’ holes in the dirt just to pass the time.” The song questions where a person finds his place. Is it somewhere between the “dirt” and the glassy heights of the New Nashville skyline, which Clark describes in the second verse as “busy bees” building hives? The ’80s-influenced track, with its shimmering guitars, driving bass, opened-up drums, and Clark’s mellow-to-howl tenor, is the perfect backdrop for this cautionary tale about what happens when you let others decide your fate.

These four friends and bandmates seem to believe in the same things, and unlike the speaker in “Common John,” they see the future with a certain clarity. It just keeps rolling, as Bearden says. Their path, the dream, this road to Roo and beyond, it’s all out there in front of them. It makes me recall Kerouac’s road: “There [is] nowhere to go but everywhere, so just keep on rolling under the stars.”