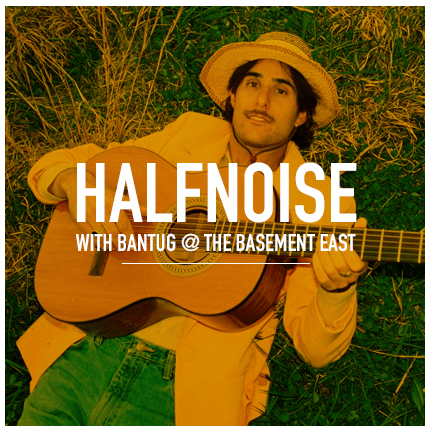 Solo projects are a tricky thing. Sometimes they force a breakup (see: Bohemian Rhapsody), sometimes they allow someone to come out from the shadows (see: George Harrison), and sometimes it just extends an already good thing (see: Jonathan Richman, Lou Reed).

We’d say HalfNoise, the solo project of Paramore drummer Zac Farro, is somewhere between the Harrison and Richman examples. Following his split from Paramore in 2010, Farro formed HalfNoise with previous member Jason Clark (you can read all about that in our 2018 feature on the group). Now consisting now of Farro alone, HalfNoise has put out two studio albums, three EPs, and a number of singles. Farro has since rejoined Paramore (2016), but HalfNoise is very much still in full swing and will be at the Basement East this Friday, March 15th.

Cross-genre group Hogslop String Band, indie-pop hit-maker Bantug, and the ubiquitous Sparkle City Disco will also be there. This night will have a little something for everyone, and it’s the perfect way to celebrate the first official weekend of Spring!

Get your tickets and more info on this Friday’s show here, and read our past features on Bantug here and HalfNoise here!