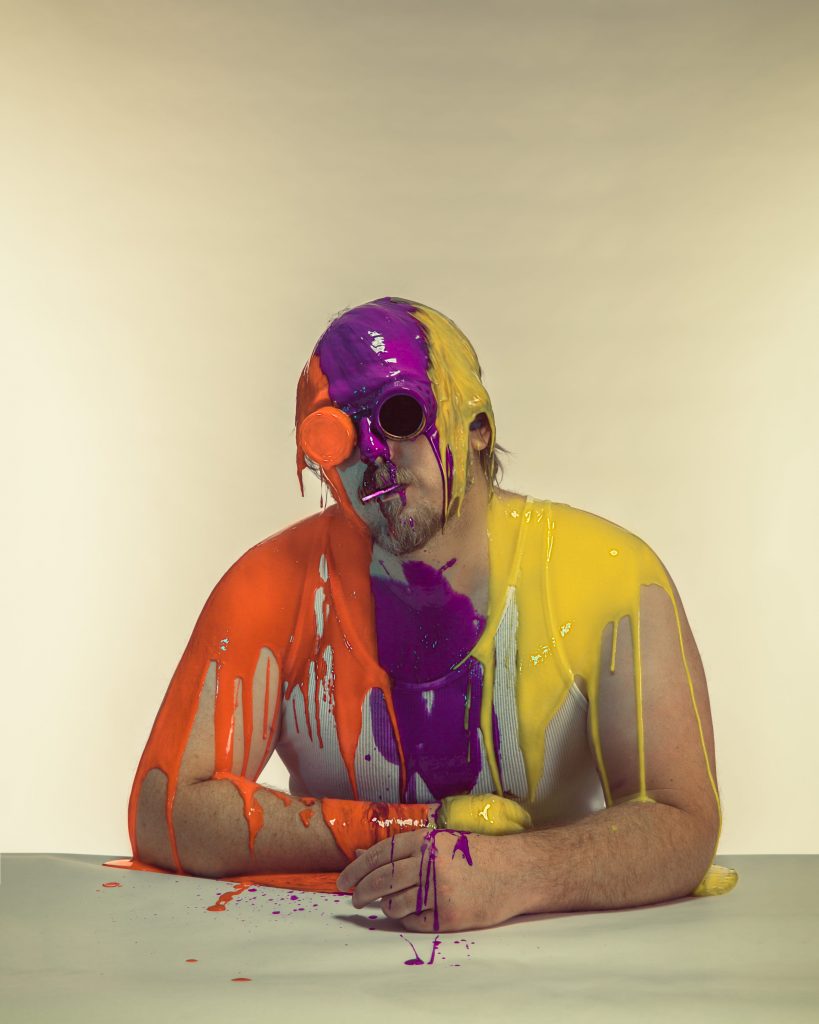 For better or worse, certain stories permeate the history of popular music. There’s George Jones riding his mower to the liquor store. Ozzy Osbourne biting the head off a live bat (and pigeon). Virtually everything Johnny Cash or Hank Williams ever did.

This sort of mythology has come to define rock ‘n’ roll history, but it’s also—as exemplified by films like Walk Hard: The Dewey Cox Story, Bill Hader and Fred Armisen’s Blue Jean Committee, and This Is Spinal Tap—rife for parody. And that makes sense: not only are these stories absurd to begin with, but they also receive a hefty dose of fact-free embellishment through decades of retelling.

Consequently, the discerning music nerd approaches musical folklore and too-good-to-be-true bios with a reasonable degree of skepticism. You may find yourself googling, reading ghostwritten autobiographies, and wading through the Wayback Machine in an attempt to verify if any of this ridiculous stuff—stuff that may have caused you to fall in love with an artist in the first place—actually happened (and if it did happen, did it really happen like that?).

On the face of it, Luke Dick’s life seems like one of these stories. The Music Row songwriter (he’s penned hits for everyone from Miranda Lambert to Eric Church), former philosophy professor, and driving force behind new wave-y band Republican Hair spent much of his childhood in Yukon, Oklahoma (Garth Brooks’ hometown). And while that alone would be enough to give many a country songwriter an edge, Dick’s story only gets weirder from there.

“I definitely don’t want to bore people with fucking philosophy,” Dick, who’s wearing a beat-up Beyoncé T-shirt (it’s the “Formation” shirt in which an illustrated Bey is flipping the bird), tells me from his East Nashville home studio. Just outside, Dick’s four-year-old son is running around with the family’s chickens and dogs.

“But Heidegger talks about self-consciousness, or being a human, or as he calls it, thrownness,” Dick continues. “He’s a pretentious dick, but there is something true about just being thrown into a life of self-consciousness.” 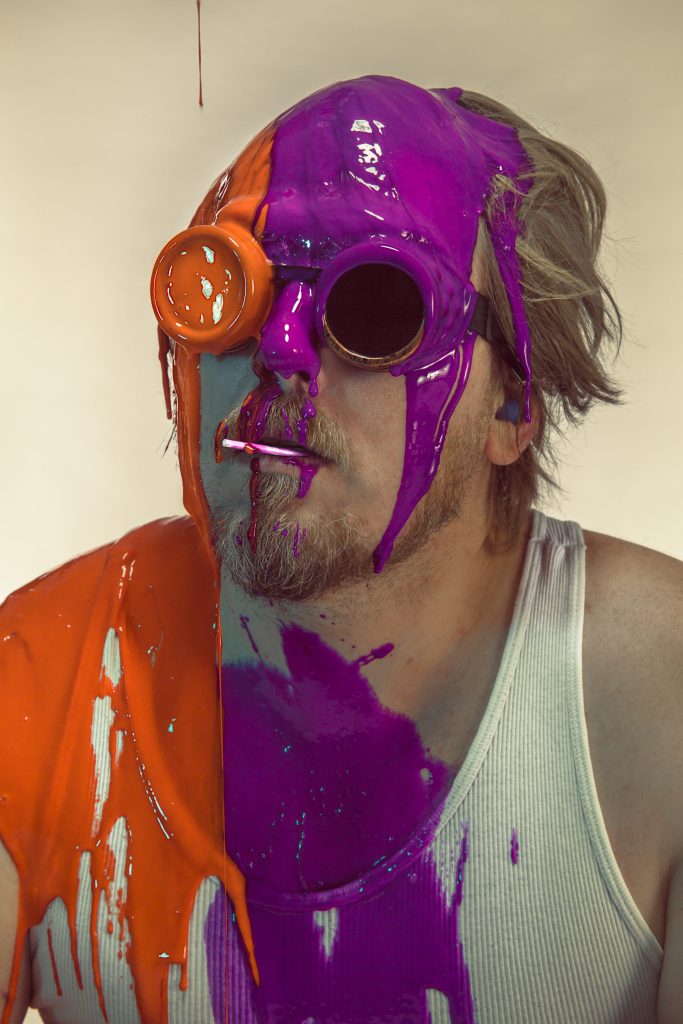 If there were ever anyone thrown into this world, it’s Luke Dick.

Born in Oklahoma City, Dick spent most of his early childhood at the Red Dog Saloon, a strip club where his mom had performed since the age of fifteen. The club’s cast of dancers, drug dealers, and other derelicts became Dick’s adopted family, and many of them are the subject of an upcoming documentary Dick is making about the club, aptly titled Red Dog.

Though Dick has fond memories of playing arcade games after hours at the club and hanging out with people like “Nasty Cathy,” it wasn’t a terribly sustainable way of life for a single mom and a toddler. So Dick’s mom got sober, married a manager of the club, and moved out to “middle of nowhere, Oklahoma” (not to be confused with the actual town of Nowhere, Oklahoma, which was about twenty miles away).

He settled into a “generally normal life” in the country, playing music, joining the baseball team, and roaming his family’s acreage. But by his teens, Dick’s mom and stepdad split up, leaving Dick to move in with his biological father in Yukon.

“It was a weird brand of authoritarian,” Dick says of his dad’s parenting style. “I worked at music. I worked at sports. I had two or three jobs all the time and had a girlfriend that I loved . . . Eventually, I just thought honestly I would be better off and happier if I were running my own life.” 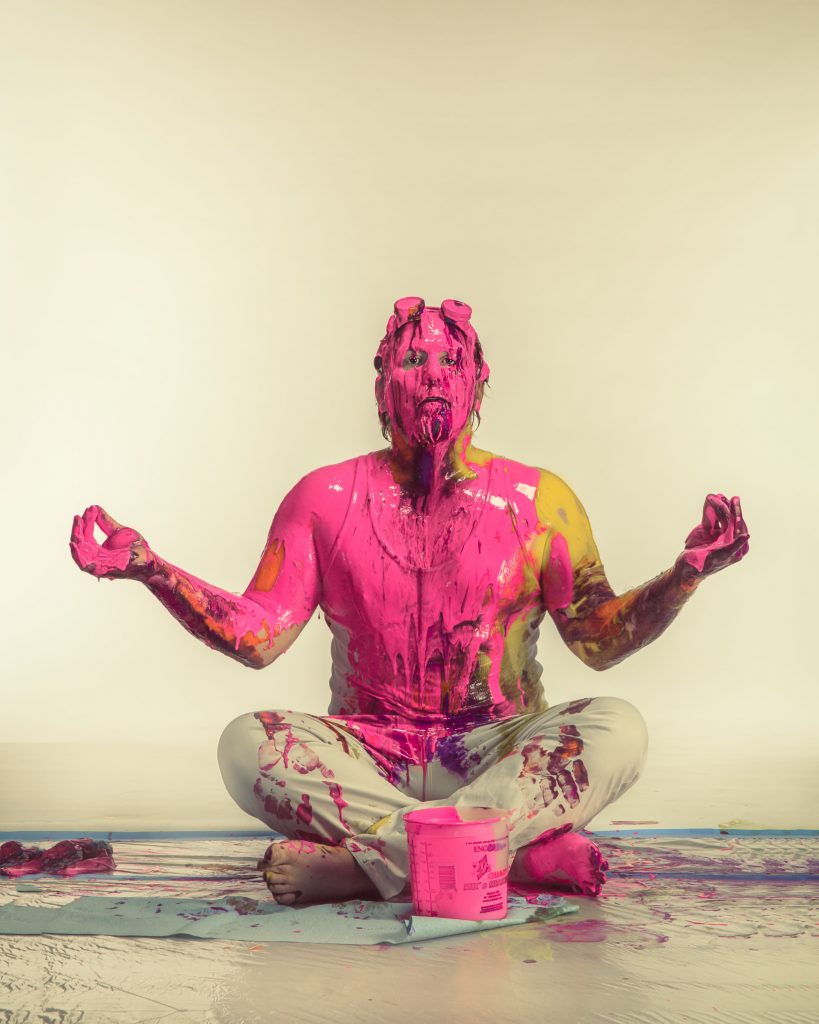 So he did just that: at seventeen, he moved out and got his own trailer. The following fall, he enrolled at Oklahoma City University, where he began studying music business (“These classes were utter bullshit about how to tour in Russia with Roy Clark and all the trials and tribulations of visas and shit”) before switching to philosophy.

He ended up dropping out to play bass with an angsty, Tool-inspired band in Dallas. “My practical plan was that if I didn’t become a rockstar, I’d be a philosophy professor,” he jokes. “That was my fallback.”

Dick didn’t become a rockstar in Dallas, but he did become a dad. He moved back to Oklahoma, where he reenrolled in school and worked an early morning job at UPS airmail. He also made a countryish record with a Dallas producer and toured behind it. Naturally, that led to Nashville.

“I moved out here and had a pub deal. I was also working on a dock, running a forklift at Yellow Freight, and writing songs for myself when I could and cowriting a little bit,” Dick says. “I made that record, and we took it in to Capitol. [Current Universal CEO] Mike Dungan laughed me out of the room, in a way.” 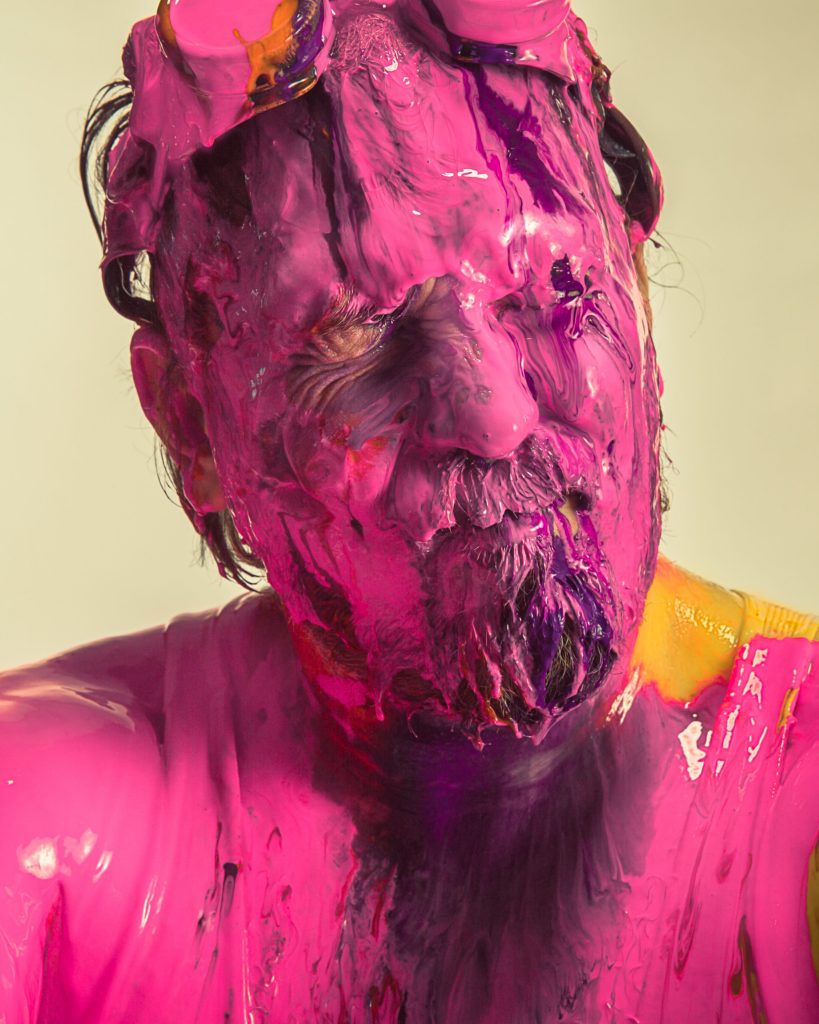 It was time, it seemed, for the fallback plan. Dick moved to New York with his now-wife (she was a resident at NYU and is now a neurologist at St. Thomas) and began adjuncting as a philosophy professor around the city.

“I remember this vividly. My daughter, who was seven or eight at the time, being at the post office, putting manila envelopes together to send to all the universities so I could be an adjunct,” Dick says. “While I was surveying the grad school landscape up there, that first six months, a couple of things happened where I started making music for advertising and checks started coming in.”

Though Dick admits there’s something inherently “unsexy” about writing modern muzak for brands like Hilton, the experience was akin to a graduate-level study in the art of the hook.

“It was another musical awakening in a way, because the pitch sheets were so wide and varied,” Dick explains. “It drove me into working outside of myself or outside of what I thought I should be as an artist and essentially widened my palate a hundred times over.”

One style the pitch sheets didn’t necessarily encourage: country. Dick had all but abandoned the genre as he spent thousands of hours honing his ad chops. So, when Arturo Buenahora Jr., a country tastemaker who’d signed Taylor Swift to her first publishing deal, called looking for Dierks Bentley songs, Dick didn’t have much to offer.

“I was like, ‘No man, I don’t write that kind of stuff anymore,’” Dick remembers. “I was in the middle of a Harry-Nilsson-spinoff-record kind of thing that I loved and I thought had potential in the ad world . . . He said, ‘All right, man, if you’re in Nashville, let me know.’” 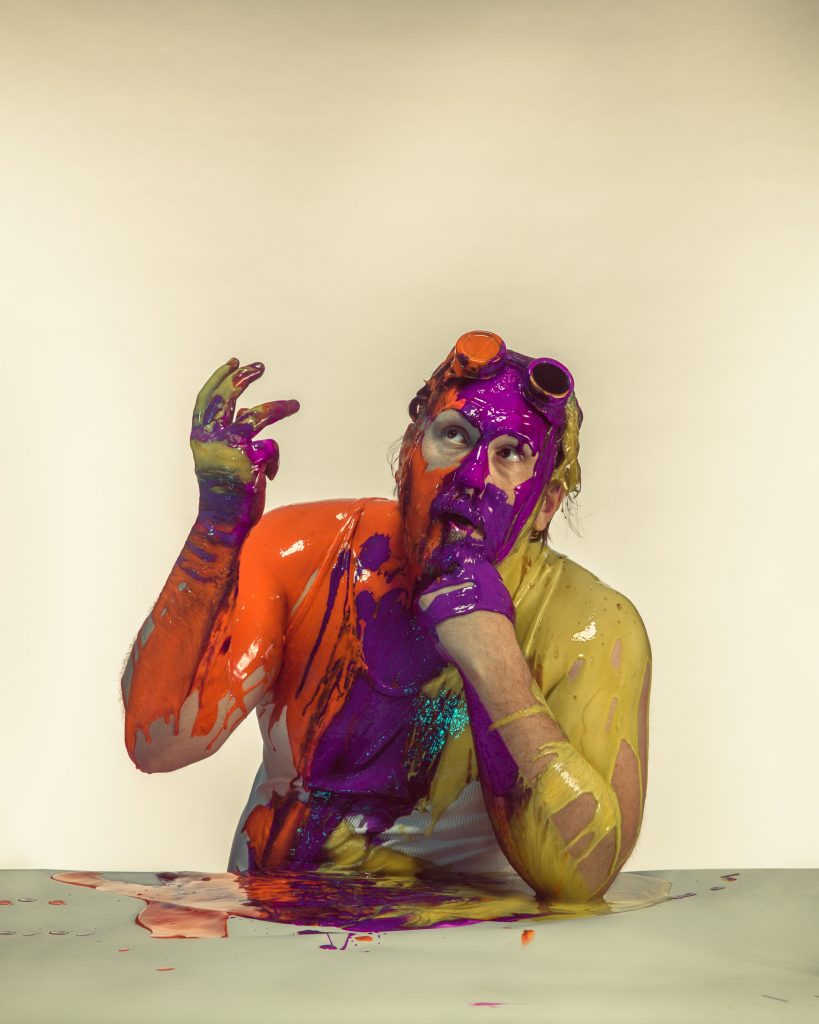 Today, Dick is settled in Nashville and going on three years working with Buenahora. And he’s got the hits to show for it: there’s Bentley’s “Roses and a Time Machine”; Eric Church’s “Kill a Word”; and Miranda Lambert’s “Pink Sunglasses” and “Highway Vagabond” (both cowritten with Music Row heavyweight and frequent collaborator Natalie Hemby).

While these tunes are undeniably modern country music, they’re also a little strange, a little off-kilter—a little Luke Dick, if you will. “Roses and a Time Machine” mentions transcendental meditation and sees the narrator hunting for a DeLorean on Craigslist; “Kill a Word” has lines about strangling loneliness to death; and “Pink Sunglasses” takes the concept behind ZZ Top’s “Cheap Sunglasses” and transports it to a self-affirming, pseudo-philosophical realm.

The songs are devoid of the thematic trappings—trucks, beer, miniskirts, etc.—that plague (or bless, depending on who you ask) contemporary country music. But that doesn’t mean Dick has a problem with any of that stuff, or that he thinks songs with those topics are any less “real” than his own stuff.

It’s this perspective that’s allowed Dick to fill an “outsider” niche within the modern country landscape. Yes, he talks about time travel and meditation in his songs, but he does it within the confines of the country perspective. “I try to stay true,” he says. “You try to stay true to your own sensibilities and your own muse to get something that you’re interested in . . . You take your own images that mean something to you, and your own mental furniture, and you build a house that you like, and hopefully other people will like it too.”

But what happens when Dick’s interests don’t overlap with the value-affirming perspective he cites as the cornerstone of country? What happens when staying true means singing about dancing in the face of nuclear holocaust, or telling a three-minute vignette about hippie seduction? 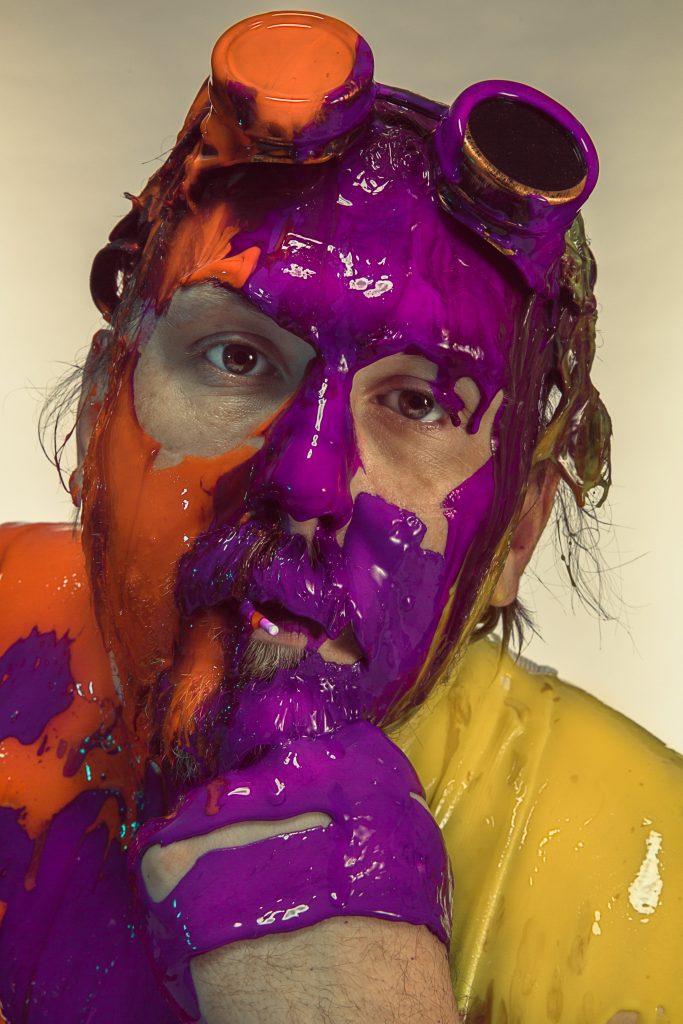 “It started three or four years ago, where I wanted to write and produce a song in one day, and I didn’t want to get into the trappings of luscious production,” Dick says. “I thought if I could just craft two guitar parts that are hooky as fuck, and that I love, and then a lyric in there that I understand and have fun with—[even] if the song is two minutes, if it’s a minute and twenty seconds—try that.”

Hooky guitars abound on Republican Hair’s debut, 2016’s High and Tight, which leans heavily on The Cars, Born in the U.S.A.–era Springsteen, and Bryan Adams. But much like Dick’s country writing, it’s the juxtaposition between bizarre lyrics and heartland music that makes Republican Hair so beautifully strange. “I Don’t Care,” for instance, follows a teenage narrator that knows the end is nigh but chooses to “get a bottle of this and a bottle of that” and party before it all goes up in flames.

“It’s a song about the end of the world and basically just saying, ‘Fuck it, let’s have a drink,’” Dick says. “‘Fuck it, dude, let’s go bowling’—sort of light a Roman candle instead of making it a sad song.”

That theme—of joy and catharsis in the face of loss—spills over to Republican Hair’s second release, The Prince & the Duke, a five-song EP that pays homage to Prince and David Bowie while continuing the philosophy of Republican Hair.

Opening track “Miss Prince” sonically channels the EP’s namesake, conjuring everything from the slinky groove of “Controversy” to the raucous lead guitar of “Darling Nikki,” but it also hints at something deeper. “It’s a lamentation,” Dick says. “But it’s a joyous lamentation of knowing that nobody is going to come around that’s going to trip a trigger like Prince.”

The Prince & the Duke’s “Whatever Blows Your Hair Back” was inspired by yard work: “My son was obsessed with my yard blower, and I just put it on turbo and he’d want to put his face in it. I slow-motion recorded him, and he just became obsessed with it.”

Over what sounds like a Casio toy piano, Dick infectiously sings, “You ain’t gotta worry right noooow” and encourages you to love whatever makes you happy, whether that’s Jane Fonda, Madonna, or AC in your Honda. It doesn’t matter what—or how trivial—it is. It just matters that you love it. 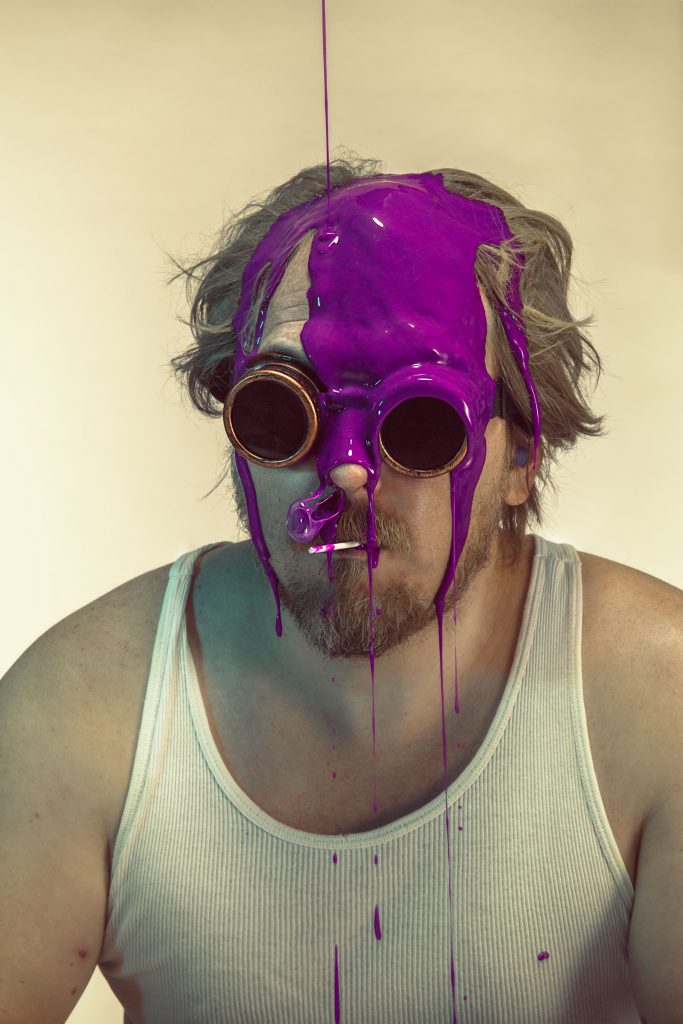 Dick’s upcoming “anti-war diddy,” “Fuck a Bomb” (off RH’s upcoming spring EP), argues that this idea could actually bring about world peace. It’s idealistic stuff, but even the most skeptic among us can’t argue against lines like “Fuck a bomb, drop a single . . . Fuck a bomb, drop a hot mike / Drop a beat get it real tight / You can rule the world, get yourself a girl / You ain’t gotta be evil.” And if you’re still not buying it, there are some JFK soundbites dropped in for good measure. Plus, in the video, Dick sings all of this as an animated bald eagle. It’s all pretty goofy—and that’s the point. Dick’s a firm believer that the world already has enough nihilism.

“So what, you’re just discovering how meaningless everything can be. So what?” Dick says later when I bring up Father John Misty, the walking antithesis of RH-style fun. “Can we have some music to forget all that stuff, please?

“I’m not saying that the world should be dumb. I’m just saying the world could have fun and still be creative, and hopefully, a little bit interesting at the same time.”

Republican Hair’s latest video and single, “Fuck a Bomb,” is out this month.