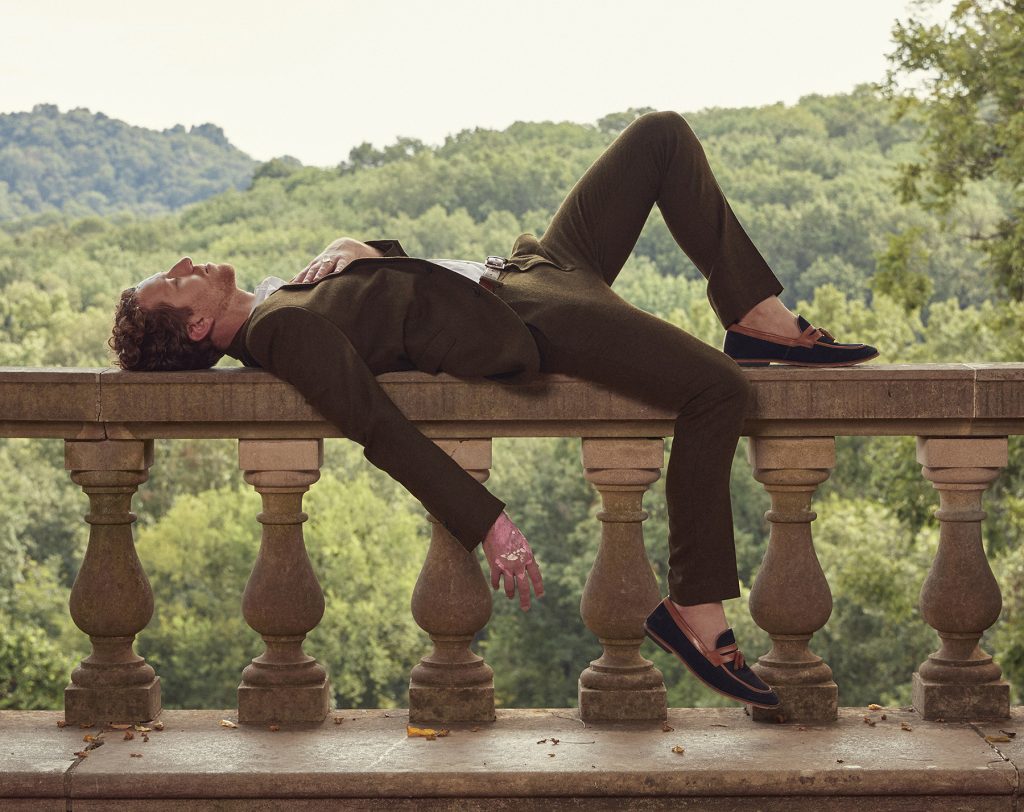 “Can you help me move this piano?”

That is quite possibly the least welcoming sentence in the English language. But walking into musician, sculptor, and all-around eccentric artist Groh’s (he formerly went by Caleb Groh) charming Eastside cottage, that is the first phrase I hear. It might be an unexpected greeting, but it’s also not one that’s easy to turn down—and I suppose part of him knew that.

The door opens, and there it sits in the center of the living room—an ugly chunk of wood, wire, and fake ivory lit by a shaft of midsummer sunlight. It’s not huge, but decades of dust have made the old upright feel ten times heavier than it should. There are no wheels or sliders. It creaks with every handhold and seems to cling to the floor, but we grunt and shove and pull until finally, begrudgingly, it rests against a wall covered in jungle-themed wallpaper, sheltered by giant tropical leaves which hang off the adjacent staircase banister.

Strangely, that evil old box now takes on a different character—in both look and sound. It now appears to emerge from a hot and humid equatorial rainforest, and the effect is a fitting allegory for Groh’s own artistic journey. After arriving in Nashville in 2013 with an established reputation for acoustic folk, he’s been on a quest to shed those creative confines and become something more.

“In a town of musicians, I have a hard time hanging with musicians,” he admits, sitting down with a fresh cup of coffee, the piano now replaced by a couch and set of chairs. “I realized I’m just an artist who happens to make music, not a guy who set out to make folk music. It’s not that simple, and I have so much trouble just making folk music or just making piano music. It’s the greatest conflict in my life.”

Groh is no stranger to conflict, though. He grew up in a constantly moving Coast Guard family where he was the “middle finger of five children.” By age twelve, he began writing “shitty radio Disney songs” on guitar. But by the time he discovered punk, things got unbearable in what he charitably refers to as his “very Christian” household.

More specifically: Groh was accused of being possessed by a demon. “My brother pointed a gun at me and my parents to break up the mess of them trying to cast Lucifer out of me. There was a lot of me running away at this time and they ended up taking me out of school . . . I really never was educated past the sixth grade.” 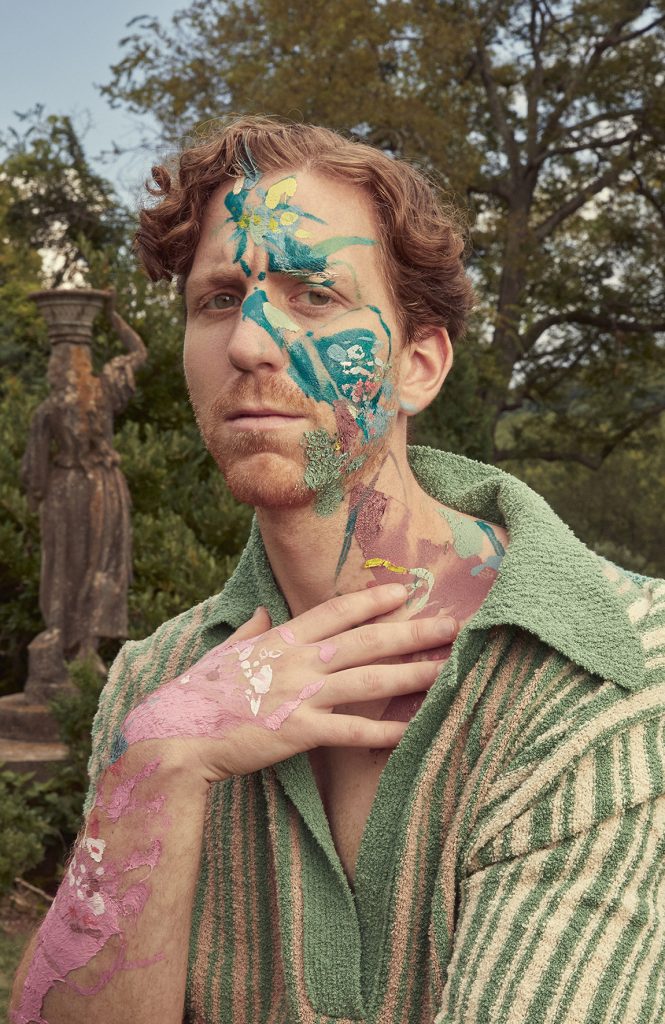 So Groh found solace in art, digging deep into old-time Appalachian folk music and recording a series of beautiful, densely introspective singer-songwriter projects. In Boston he worked under the moniker The Happiest Lion, then released the Down, Dakota! EP and Bottomless Coffee album under his own name. But after moving to Nashville, he began distancing himself from the city’s vibrant Americana scene.

“That’s the artist side of me,” he says. “The side that isn’t okay just picking up an acoustic guitar and hitting the road, because I know there will be a disconnect. I know what the audience hears and what I hear in my head will be completely different, and I don’t like that. I want them to hear what I hear, and I love what I hear.”

Groh began exploring the world of electronic production with 2015’s Hot Pop EP, mixing elements of world music and club beats, synthetic instrumentation, and ethereal, poetic vocals for an electro-folk gem. At one point, the project’s “FCKNU” was the fourth-most viral song on Spotify in the United States (number six in the world), and “Sumac” was featured in an ad for Sony headphones.

Groh’s 2016 album Ocelot further explored that vein but with a more organic tone. And his recent Hap EP embraced a hard-nosed electro-pop approach as he toyed with funk and reclaimed some of his older work in the name of fun. He also developed a bold new sense of fashion to complement each project.

But all the while, Groh was working himself ragged. He paid the bills with something called needle felting (creating intricate wool faux-taxidermy pieces that became popular nursery decor), producing music for other artists, writing poetry, preparing art installations, and dreaming up lofty, conceptual live shows that took months to conceive and prepare for. Plus, he was attempting to lead a traditional domestic life, even going so far as buying the East Nashville house with his then-girlfriend. 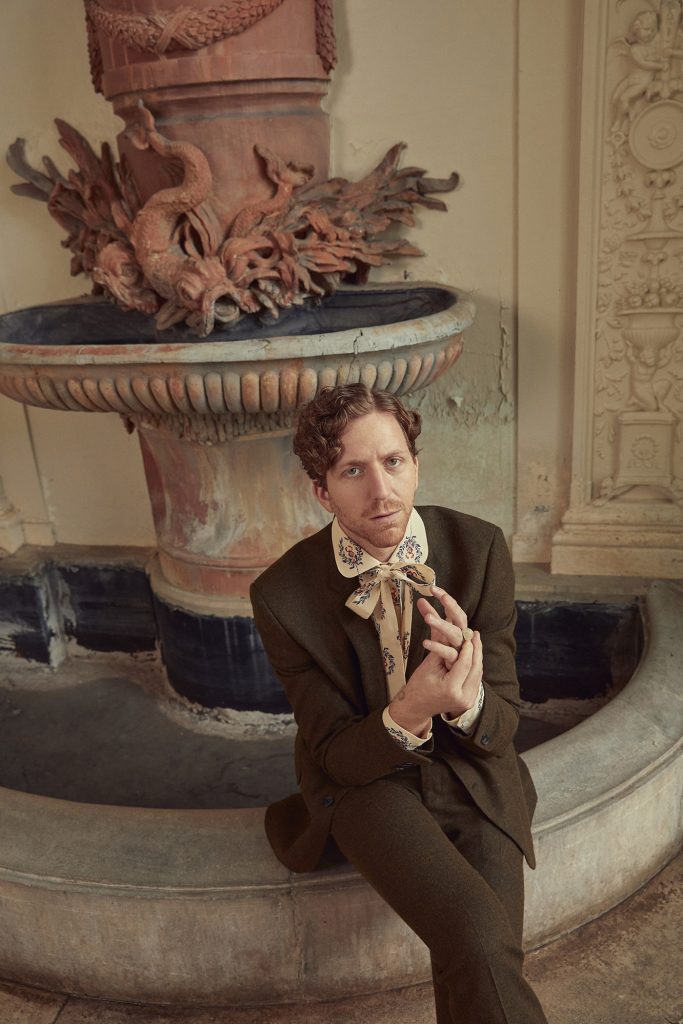 Recently, though, he’s decided to let go of everything that came before. “To be honest, the Hap EP is the last of that era,” Groh says. “I love it for what it is, but I don’t think it’s a portrait of me. Now I’m excited to just do realism—to paint the most realistic version of myself.”

“I found out who I am this year, and finally gave up on caring what the hell other people think,” he wrote in a bold Facebook manifesto in April, foreshadowing another artistic shift for his next album. “I didn’t even know that I was deeply influenced by others’ opinions. It turns out that when you throw the influence away, joy is close behind.”

Back in his leafy living room, Groh explains what he meant. “I just had a miniature breakdown,” he says. “It was like, None of what I’m doing right now is fully me. Other people can see it, why don’t I just commit to being me? I was [in my felting studio] like, What am I doing in this space? We’re making products instead of art, and I need to be making art. So I shut that down.”

He still does the needle felting, but now the operation is much smaller in scale. He’s also single again, living alone and following his muse after the breakdown forced him to start believing in his artistic vision—even when it’s so challenging to the mainstream that it seems, at first, like nonsense.

His most recent single from the Hap EP, “Slow Attack,” is a good taste of where Groh is headed. Clocking in at a brisk one minute and twenty-two seconds, it’s built on strange, swelling choral harmonies, a pair of dueling wurlitzers, and little else. It feels haunted, empty, and alive with energy at the same time. It doesn’t fit any discernible genre or marketing format. It’s art for art’s sake.

“It’s perfect to me, because it pushes a boundary and it’s simple,” he says. “Like, ‘How simple can you make this, while still being evocative?’ That to me is a success, and that’s more like where I’m going.”

The track was originally intended for the full-length Ocelot album, but Groh scrapped the idea when no one on his team could understand the concept. “But the reason that nobody got it is the reason I chased it this time,” he says. “That’s how much of a change happened within me—the thing that kept me from making it public before is the thing that made me make it public now.” 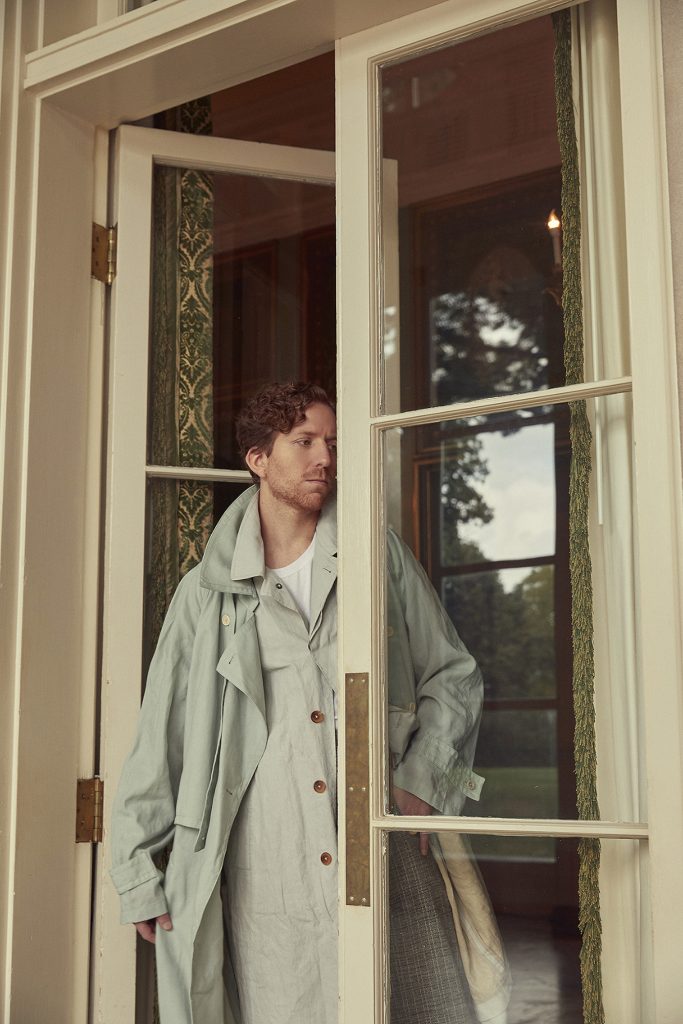 Talking with Groh, it’s clear the piano is still being moved, so to speak. He’s currently working on another blast of projects, including a new concept album he plans to record in a “haunted lighthouse” that can only be reached by boat.

“It basically compiles old bits of European public-access television and the way they use classical music,” he says, with what appears to be total sincerity. “Everything was on tape and old VHS, so it’s all distorted, and maybe even the players aren’t that great because the station couldn’t afford any better. I love it, so we’re gonna do that.

“The album starts out with this beautiful little classical piano riff, but it has some tape work on it and it’s kind of warbly and there’s some soft singing, then it comes in with this beat, and it counteracts the melody but blends together. It’s these two beautiful worlds—the classical realm and these really demanding beats that make you listen and wake up. I think the thing is, there just are no limits.”

No limits is right. Groh is also working on a full-scale folk opera, which he hopes will be ready before the next album. “It could be total suicide for my creative work, but I don’t care—I’ve had this vision for ten years and I’ve gotta make this thing,” he says.

And he’s planning a secretive, two-part music project called Shrine, which he describes as a mix of “intense darkness and intense light.” But mostly, Groh seems content to follow his muse each day, knowing that wherever it leads will be a happier place.

“Right now, I start and end the day on the typewriter, and it’s beautiful,” he says. “I wake up, make coffee, open the window and turn the air off in here, and I just listen to the wind and birds and crickets and just type away, whether it’s lyrics or poetry stuff. Then I’ll go sculpt some—or maybe a lot—and come back to music. I just keep bouncing, and it doesn’t get exhausting because one feels like alone time and one feels like a party. One feels hand-heavy, and the other feels brain-heavy. I’m so fortunate.”