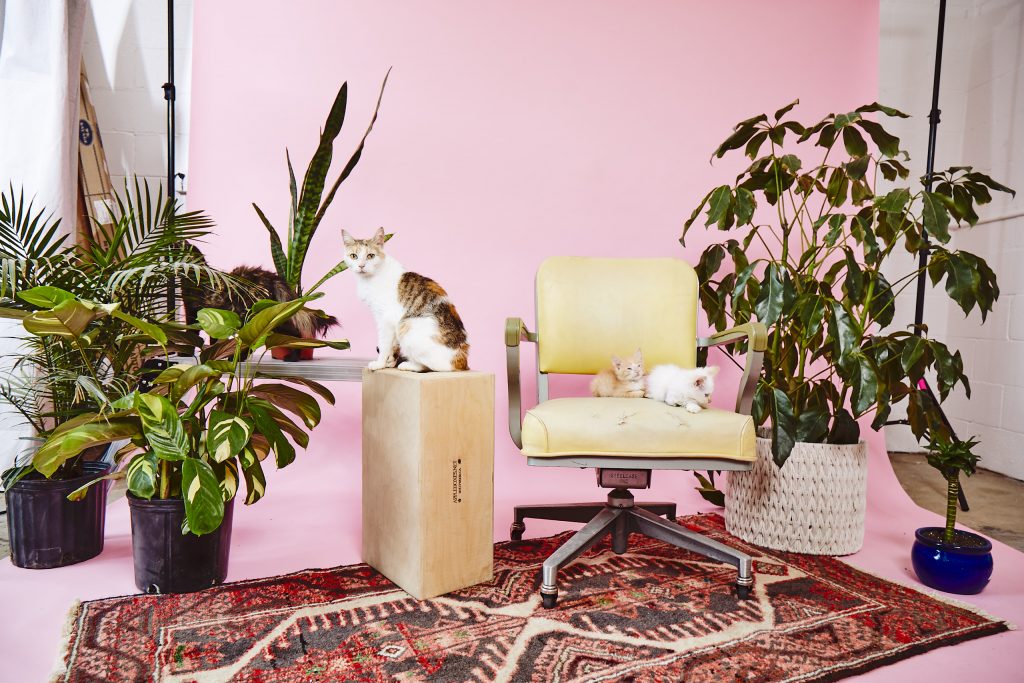 Not a whole lot is going on at the corner of Riverside Drive and Porter Road in East Nashville, unless you count construction. In that case, there’s plenty going on. A Korean barbecue joint is opening there soon, another entry into the already robust collection of international food in Nashville. But on a dreary Monday morning in late September, I’m meeting Beca Lewis Skeels and Anna Talaga next door at Nashville’s soon-to-be newest cat cafe, adoption center, pastry shop, and pet-friendly plant shop. They’ve decided to abbreviate that to something far catchier: The Catio.

Brown postal paper temporarily lines the windows at The Catio, but a black logo and the words “Coming Soon” are already painted on the outside. Skeels and Talaga greet me as soon as I walk into the vacant storefront, and I’m promptly introduced to their friend Melissa, who I’m sure has many responsibilities but today is acting as chief cat wrangler, which is no easy task. The cats, of which there are about five when we meet, are prone to surreptitiously exploring their future home. For now that home is empty, save for the blue painter’s tape lining the floor, which designates areas for the counter, seating, and separate cat lounge area.

Talaga leads me on a tour of the space as though all the furniture is there, and it’s obvious the duo has a calculated vision of what their space will look like. It’s not difficult to envision the final product. Skeels and Talaga feel lucky that they found this spot in particular. 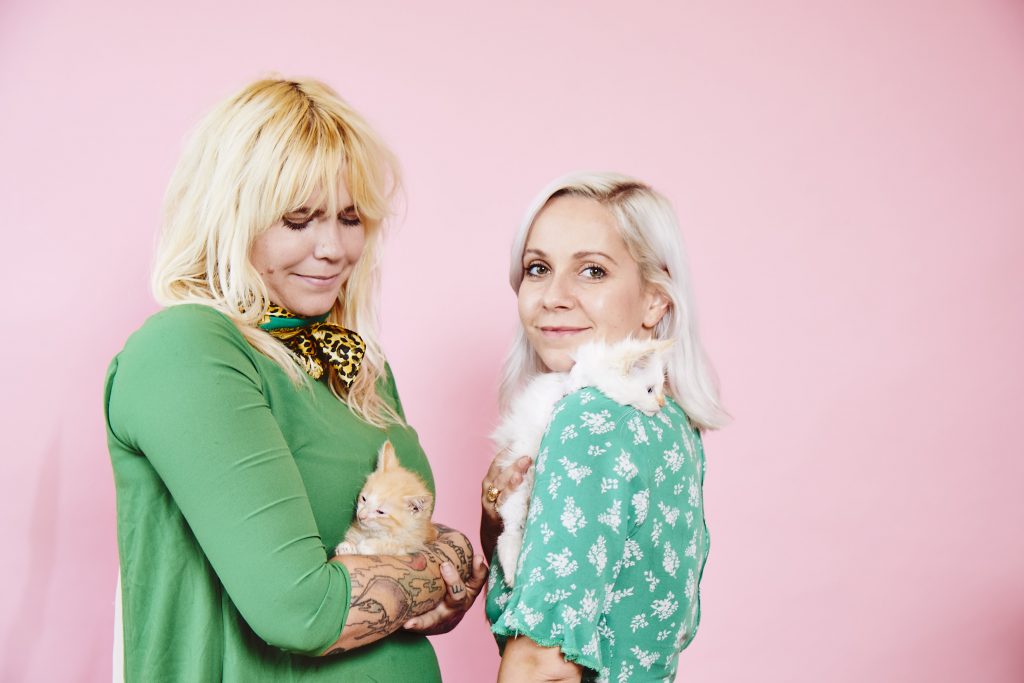 “The name came first,” Skeels says. “A week later, we got our LLC and started looking for spaces. I was driving on Riverside and I stopped and took a picture of this space. I texted it to [Talaga], and she texted back and said, ‘I’m looking at that listing right now.’ I got chills.”

Talaga says after that exchange, they stopped looking for other locations. This one felt too perfect to pass up.

“Our concept is to make this a home,” Skeels says. “I want people to walk in and feel like they’re walking into somebody’s living room. It’s going to be really comfortable. You can bring your laptop in and do an hour of checking your emails with a cat on your lap.”

The space also has something that is invaluable to Skeels and Talaga: a separate entrance. In fact, that element is mandatory for any feline-friendly establishment. The cat lounge, although under the same roof, will have a side entrance and will be separated from the cafe and (obviously) the kitchen. It even has a separate HVAC system. That way, The Catio will be as safe as possible for anyone with allergies. But those prone to itchy eyes and sneezing need not worry, they’ll still be able to see the cats. The partition will have windows.

Another big draw for customers will be Skeels’ vegan pastries. The Catio’s Instagram (formerly under Skeels’ name and dedicated to pastry pics) has over seventeen thousand followers, and it’s easy to see why. Her pastries are stunning, colorful, and simultaneously encourage you to maintain their perfect form and devour them whole. And they’re delicious. A few days after our interview, Skeels gifts me a cinnamon sugar pumpkin empanada. She says that most people probably wouldn’t be able to tell her pastries were vegan unless she told them, and I totally believe her. Even while eating the empanada in front of her, I had my doubts. That’s exactly what Skeels wants me to think. 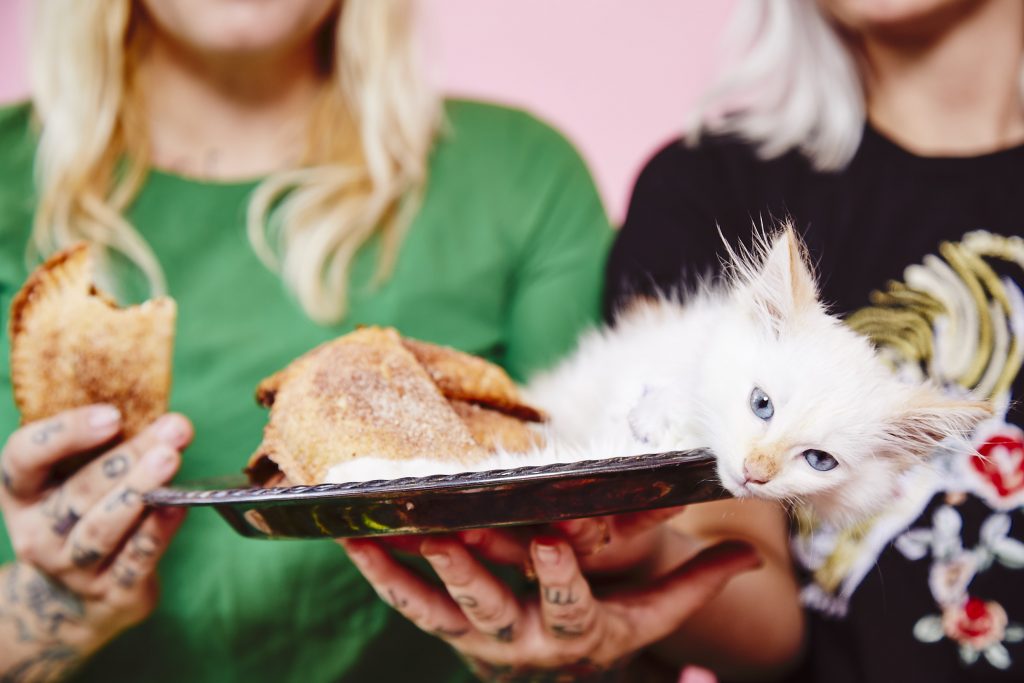 “I don’t want to be the world’s best vegan pastry chef,” she says. “I want to be a really great pastry chef and then after the fact be like, ‘Oh, that’s vegan.’”

If vegans really are, as Anthony Bourdain famously said, the “Hezbollah-like splinter faction” of the vegetarian community, then Skeels doesn’t fit the bill. She’s not out to convince you—or guilt you—to go vegan. She also wants to squash the notion that just because something is vegan, that doesn’t mean it’s gluten-free or even remotely good for you. As Talaga points out, these are indulgences.

“My stuff has the highest gluten level you can possibly get. Like, there’s no higher,” Skeels says, laughing. “But I want to remove that stigma. I want people to realize that they’re making a small decision in their day. I’m not asking everybody to go vegan—that’s not what I’m trying to do. But instead of going to another bakery where they’re using animal products, come here and enjoy what you’re eating and know that it’s not made out of dirt and carob chips.”

Skeels has been a pastry chef for eleven years. Before that, she went to film school with hopes of becoming a children’s filmmaker and even earned a BFA in film production. After graduating and working on the set of a feature film as a second second AD (“the dumbest title ever,” she says), Skeels noticed she was spending a lot of time at craft services. “That’s where I saw people were most happy,” she recounts. “Immediately, I finished that project and went and got a job at the lowest level you could possibly get at a bakery, which was essentially making scones and muffins at four o’clock in the morning every day.”

Skeels says she had no prior experience working in a kitchen or bakery. She built her brand from the ground up. Her breakthrough baking gig was catering a baby shower for lifestyle blogger Elsie Larson. After that, the orders started pouring in. Now you can find her pastries stocked in cafes all across Nashville, like Falcon in Wedgewood-Houston or Nectar Urban Cantina in Donelson. Soon, they’ll be at The Catio. 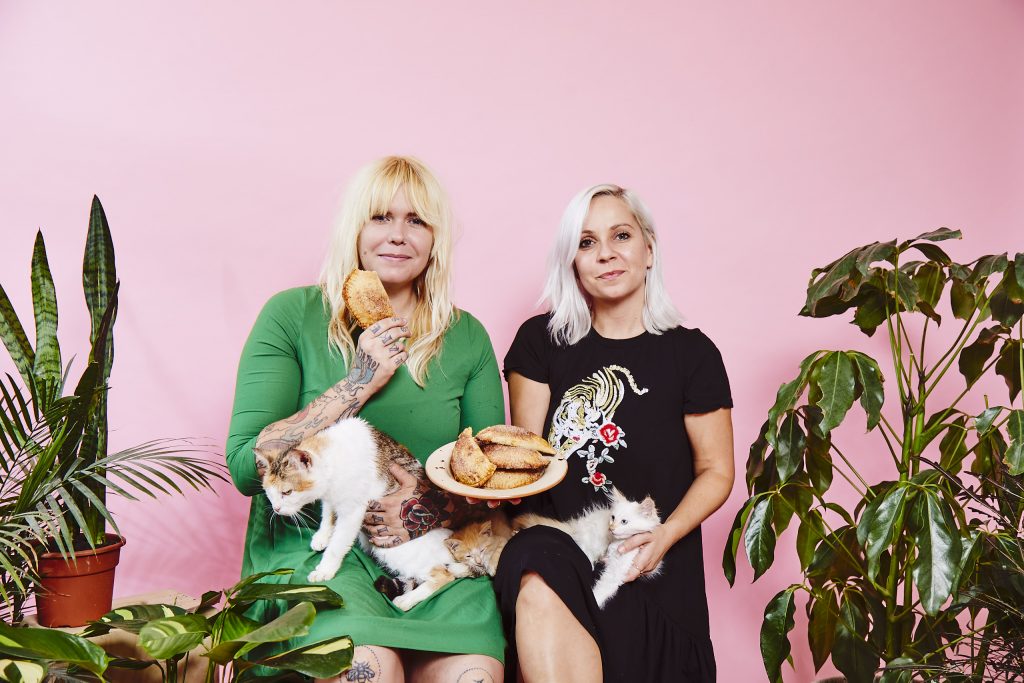 This November will mark two years that Skeels has been in the Nashville area. Talaga has been here off and on since 2005. She attended Vanderbilt as an undergrad before heading to Baltimore for six years of grad school (oh yeah, she has a PhD in neuroscience, by the way).

Skeels and Talaga met because of Thor, a cat from the Cayce Homes community with severe disabilities. Talaga shows me a picture she has saved on her phone. Thor is missing one of his eyes and both of his ears. Talaga hypothesizes that the infection that caused him to scratch away his ears spread, thus the missing eye. He is apparently—though not surprisingly—an unfriendly animal. Nevertheless, Thor became a project for Skeels, who works closely with disabled cats. Talaga was fostering him before Skeels, and they became instant friends at Thor’s handoff.

“We became a resource for each other,” Skeels says. Now, the duo is working to become a resource for the community—that is, they’re looking for any way possible to get cats adopted. And a big part of that is simply getting the animals out of cages and into places like The Catio.

“If you have a cat that’s in a cage at PetSmart hunkered down, it’s not going to get adopted,” Talaga says. “So we can still take the cats from [Nashville Cat Rescue] that don’t show well in a cage.”

Although easily dismissed as white millennial ephemera, Talaga and Skeels have seen firsthand how much of a force cat cafes can be in the adoption world. Talaga is friends with the founder of Catsbury Park, a cat cafe in—wait for it—Asbury Park, New Jersey. Those folks are responsible for over two hundred adoptions a year. Skeels tells me that Java Cats Cafe in Atlanta doubled the adoption rate for the local shelters. The Catio has similar goals for Nashville.

Before I even have a chance to ask the question myself, Skeels mentions that many people have asked about other cat cafes in the area—namely Mewsic Kitty Cafe on Nolensville Pike—and whether or not The Catio considers them competition. That notion, to Skeels, is ridiculous. 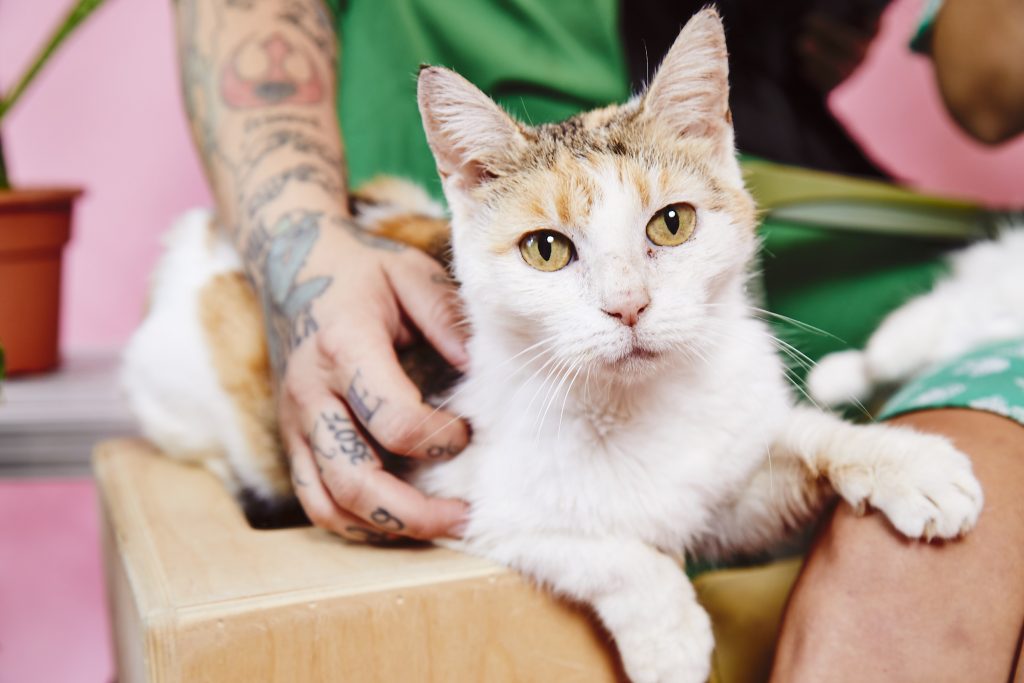 “We all have the same goal, which is getting cats adopted. And our concept just happens to be attached to a vegan bakery and a plant shop and a gift store,” she says. “We’ll always support anyone who’s on the mission of getting cats adopted and lowering shelter euthanasia. We’re all on the same team.”

Getting the cats into The Catio is only step one of getting them adopted. Skeels and Talaga have many smaller goals to guarantee that no cat goes unadopted for too long, and social media plays a big role in that. Talaga tells me that black cats’ adoption fees are often slashed because of the superstitious stigma attached to them (The Catio’s logo is going to feature a black cat, for what it’s worth). Skeels also thinks people don’t want black cats because they are hard to photograph. I mean, if you’re not even going to get Instagram likes, what’s the point of adoption, right? Skeels herself has seven black cats, and she wants to host workshops to teach people how to photograph them. I’ll admit, my first thought is, Oh how hard could that be? But then I look at the pictures I tried to take on my phone of Snowflake, a very photogenic kitten, and see they are blurry messes.

Skeels and Talaga have so many ambitions for their completely self-funded cafe that I begin to wonder if they can pull it off, like the kid running for class president who promises free ice cream and extended recess. But really, there’s no reason to expect they won’t be immensely successful. I’m mildly allergic to cats, and even I had my moments after talking with Skeels and Talaga where I thought, Maybe I could make this work. Their passion is contagious.

“There are so many ways we can use this space to reach out to our community, not just in the animal rescue world,” Skeels says. “Not just through vegan pastries, but through connecting with other people in this community who are opening businesses—any kind of compassionate field, whether that be working with animal rescue or working with the homeless or working with children in need. We’re all experiencing that compassion fatigue where we need to connect with people, and I think this is going to be an incredible space to do it. Plus it’s going to be full of plants and cats and cinnamon rolls! You can’t lose.”