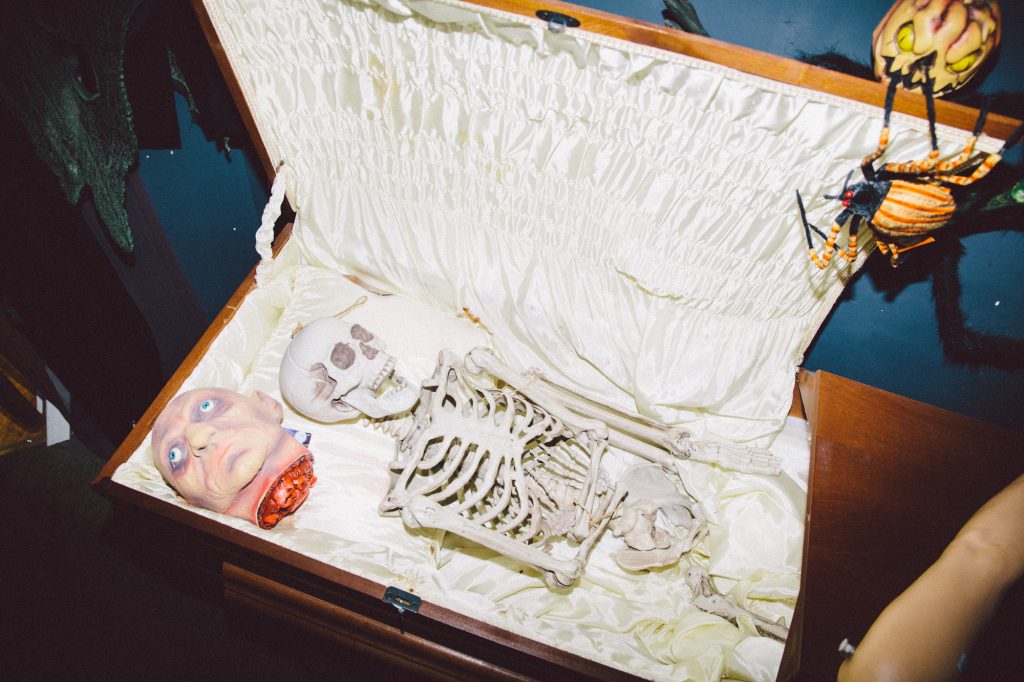 If you grew up in the Middle Tennessee area in the late ’90s or early aughts, a menagerie of deliciously cheesy local commercials more than likely occupied the white noise of your life. As you fought with your sibling for control of the Playstation, Bart Durham’s ghoulish presence probably resided in the background, asking if you or a loved one had been injured on the job. Or maybe while you did your homework, you heard the faint sound of Carnival Kia’s Chris Bostick exclaiming, yet again, “Don’t you leave till you see me!”

While most of these commercials fell somewhere between surreal and sad, one of them always warmed my adolescent heart. It featured a buck-toothed, somewhat androgynous butler named Spike, who was just the right amount of unsettling—kind of like Marty Feldman’s Igor or Riff Raff from Rocky Horror. Unlike Durham or Bostick, Spike seemed to be in on the kitschiness of the whole premise. There was a bit of self-awareness that said: “Hey, before the six o’clock news bums you out, check out this butler dressed as Austin Powers.”

For the uninitiated: the commercials I’m referring to are for Performance Studios, Nashville’s go-to costume, cosmetics, and wig warehouse. Since 1989, Performance has helped Nashvillians temporarily transform into other people, and they’ve also, of course, been a fixture of local cable via Spike, their mascot.

But even if you’ve seen the commercials or bought a Beetlejuice costume from Performance, you probably don’t know Gary Broadrick. Along with co-owner Glenn Alexander (Broadrick is on the left in our photos), Broadrick has built Performance from a small showroom on Church Street to the 30,000-square-foot Thompson Lane behemoth it is today. Because Spike gets all the attention—and because I found it fitting to unmask a man that sells masks for a living—I wanted to let Nashville’s Spooky Santa tell his story in his own words. So, in front of a rack of bustiers and clown shoes, Broadrick talked about growing a business in a growing city, the escapist joy of Halloween, and the true identity of Spike (hint, it’s not him). Here are excerpts from our conversation. 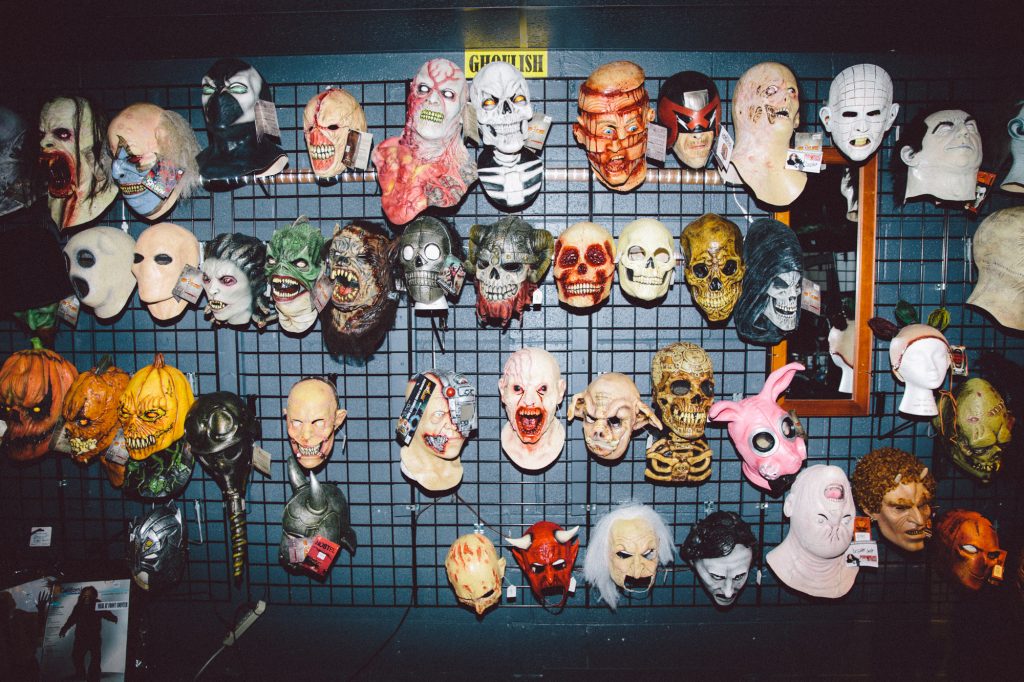 We began in 1989 on a four-by-eight-foot table in the showroom of a lighting store located on Church Street across from Nashville Electric Service, which is where the store ended up being. It was decided that there was a need for professional makeup to be brought into the city of Nashville because music videos were really starting to get popular, and a lot of them were shot in the Music City area. Makeup artists were aplenty in Nashville—they were moving here like crazy from New York, L.A., Atlanta, everywhere. But they had to order product from out of town and have it shipped in. We started bringing product in so makeup artists could buy makeup.

Then, the little space next door in the same building closed. [The owner] had a costume store, had been around forever, and we moved into her space so that we could carry more makeup products from other professional companies. Then we created a line of cosmetics called Performance Cosmetics that we could sell to makeup artists. We added a few wigs, and one day out of the blue—we’d been there three or four years—Tennessee Repertory Theatre called us and said, “We have some costumes on some racks downstairs at TPAC. They are going to the trash. If you want them, come get them. Maybe you can rent them out or resell them or something—they just need to go away.” We went down and picked them up, so we had three racks, probably about twenty-five feet of costume rentals . . . We just kept pushing the walls out at 1205 Church Street and accumulating the rental department.

ON GETTING INTO COSTUMING:

I did some college as a theatre major, and it didn’t take me long to realize that it’s either cattle call and be hungry, or teach. Neither of which I was willing to do, so I started dancing, and I did a lot of dance and choreography work around town. I traveled some doing some choreography work and did that for twelve, fifteen years.

As the old knees started going out and I realized that was soon to be gone, I started working as a makeup artist here in Nashville. I was doing music videos, documentary work, pretty much whatever I could, and I started working at the makeup counter there on Church Street. I slowly stopped working freelance and started doing just the makeup work and the wigs, novelties, accessories, and costume rentals . . . I see wardrobe people come in here now that have been coming to me asking for stuff for thirty years—which kind of blows me away because I’ve watched them grow old and I’ve never aged a day, of course.

ON WHETHER OR NOT HE MISSES DANCE AND CHOREOGRAPHY:

No, not at all, because it kind of phased from one thing into another. I’m very fortunate and very blessed. I’ve never had a job I didn’t like, and I’ve always been happy doing what I’m doing. The last eight years in this building doing this has been really good. It’s very satisfying. It’s nice when people say, “Your store’s great, this is amazing, I love it.” Any compliment that they give you, you feel like you did something right. Even if it ends tomorrow, I’m still very satisfied with what we were able to accomplish as a group. It’s certainly not just me—there are fifteen employees here, and most of those employees have been with us for multiple years. At one time we had three generations of a family working here at the same time: grandmother, mother, and daughter. It kind of says something for the love of the business that the employees have stuck around like that. It’s a unit, it works as a unit . . . I feel like I’ve lived three lifetimes. My school, my dancing, and then the career in this business. It’s just been good. 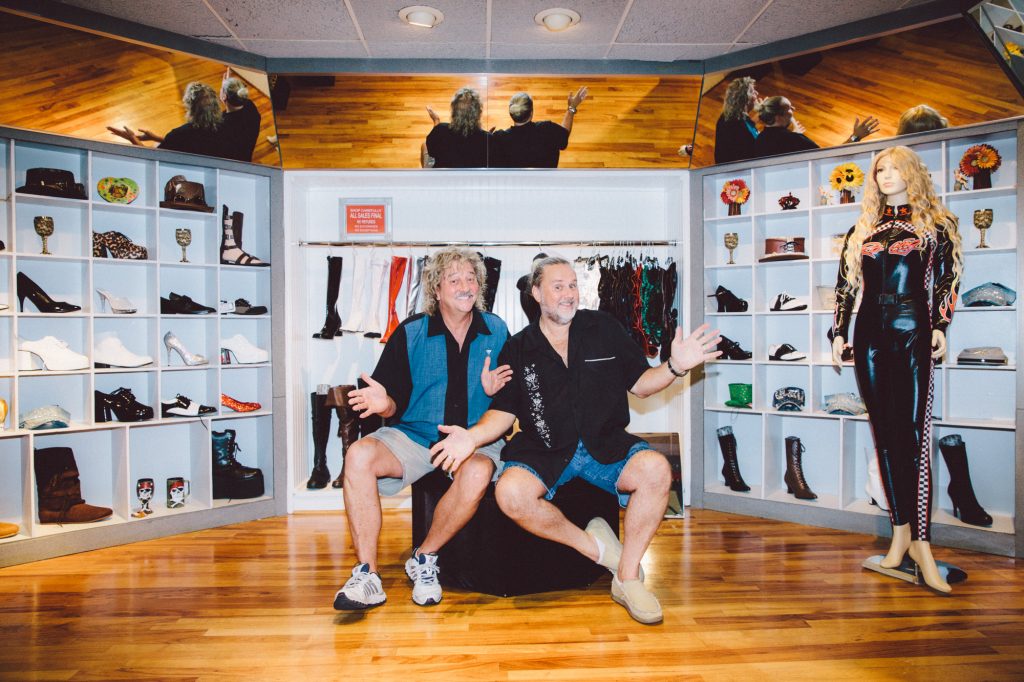 ON THE GENESIS OF SPIKE:

Spike is actually an employee here—it’s the lady [Anita Martin] that works at the front counter. There was a prop that one of the vendors made in the late ’90s, and it’s a butler with a humped back, and he carries a tray. He looks very much like Spike in the face, and he’s life-size, made out of styrofoam. You would buy him and put in him your house on Halloween time and you’d put candy or dishes or whatever on it. It was just sort of a novelty item. One day going into the Halloween season, [Martin] dressed up as the Butler, that was her character. Then we started calling her Spike that day just because we needed a name for her . . . We really felt like we needed a face for the store and a mascot, as it were, so we asked Spike to do that very first commercial. Spike dressed as an Austin Powers–looking character.

I can’t enjoy Halloween because I’m just working so much. I haven’t answered the door for trick-or-treaters in twenty-five years . . . I’m here making sure everyone else is able to answer the door for trick-or-treaters, and in a costume they like, or whatever the idea happens to be. But that’s okay. That’s what I do, that’s what I signed up for. The goal is to reach out to people during the Halloween season and educate them to the fact that this is who we are, this is what we do. When you graduate from high school and you start going to Watkins and you’re shooting your first film, this is the place you call. We want to get the words costuming, makeup, wigs, beards, accessories, all of that, synonymous with the name Performance Studios.

ON THE ESCAPISM OF HALLOWEEN:

I absolutely believe it’s escapism. When you put on a costume, you become anybody you want to be, especially if you’re wearing some kind of a mask. For some reason—even if it’s just some really small eye mask and that’s the only thing that you have on—you become somebody else. You’re going to do things that you would never do in public if it was just you.

That goes into just wearing a costume too. If you’re fully dressed as somebody else, you’re going to do things you would never do on your own. You’re more apt to walk up to people you don’t know and have a conversation. Your social skills improve tremendously because you are now somebody else and you can do things and say things and be more outgoing than you could as your own person. You’re not Joe that works as an assistant manager at Kroger, you’re now a Johnny Depp look-alike and you can swoon any lady that you walk up to. That’s the way people see it when they get in a costume. I think it gives them a chance to be somebody else just for a few minutes and forget that the electric bill’s due—or past due, as the case may be. Because now you’re Guinevere, you don’t have electric bills! 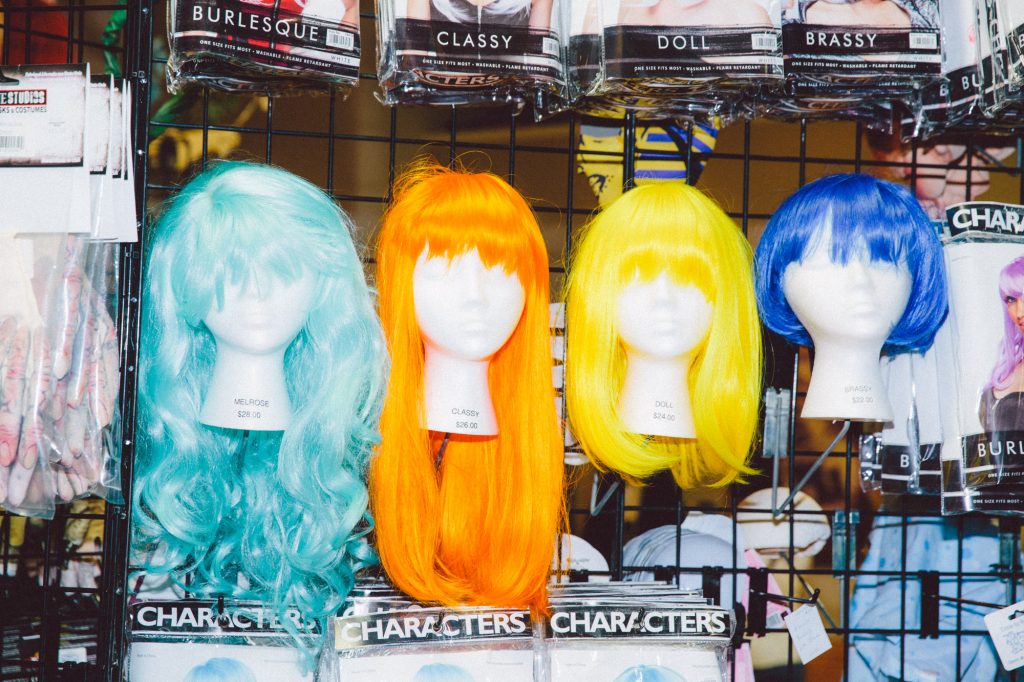 ON CREATING MEMORIES FOR YOUNG NASHVILLIANS:

I do believe that even though [kids today] are growing up fast and moving fast, and they’ve got the information highway at their fingertips, we still have people that come in who love to put on costumes. Granted, unlike years ago when you put your costume on, now you take a picture of yourself. You get a selfie when you put a wig on, so it’s a little different idea. But it still helps them create a memory. They remember, as a child, going to the costume store with their parents or their grandparents and picking out that costume, or buying that makeup for that zombie look that they’re trying to achieve . . . I don’t remember going to Kmart and buying school clothes, but coming into a situation like this where everything in the store is larger than life? They’re going to remember doing that with somebody.